Little 1 is a fidget, she can't sit still for 5 minutes unless she is doing something, up and down like a yo-yo, she rarely watches tv unless she is drawing or writing a story too and sitting to watch a film- forget it. These days, if she isn't drawing or writing, it is mostly her phone she has in her hand but lately her attention has turned to something else- push poppers. 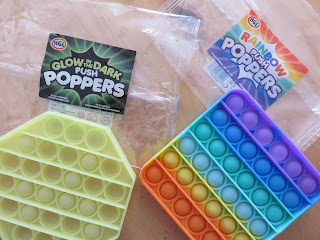 She had mentioned them to me a while back and said she wanted one but I hadn't got around to buying it, however she was in luck as we have recently been sent two push poppers from HGL to review, it is safe to say they have been a hit. We received a square rainbow one and a hexagonal glow in the dark one, both were immediately commandeered by the girls. 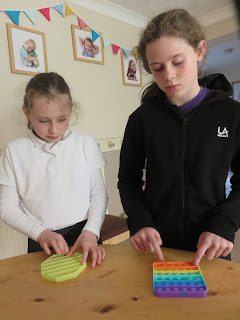 Made from flexible material, they make a satisfying pop when you push in the 'bubbles' and then can be flipped over to repeat the process on the other side endlessly, it reminds me of popping bubble wrap as a kid. These fidget toys are strangely addictive and great for stress relief too. The girls have been spending time racing each other to pop theirs first or time to see who is the quickest or the most number of pops in a minute, it has kept them busy. 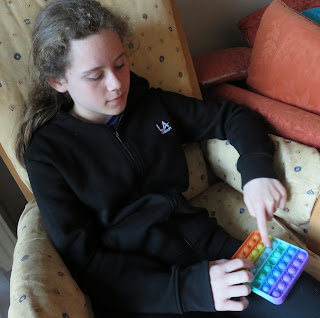 Little 1 doesn't realise she is doing it but has had hers in her hand more often than her phone this week, popping away quite happily while watching tv, chilling or eating her breakfast! Little 2 sucks her thumb still (yes, I know!) but I have noticed instead of her thumb creeping in her mouth she has been playing with her push popper instead, a positive situation there. 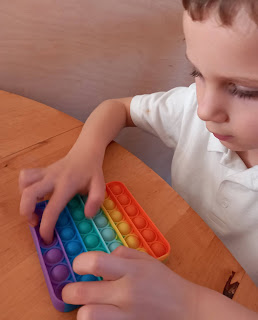 Little 3 has taken a liking to them too and if he spots the girls have left them lying around he is there popping away, fab for his dexterity. We have all enjoyed spending a little time playing with these push poppers this week, even Daddy and I have had quite a few goes. These HGL push poppers are out now and available from Smyths, Claires and Toymaster stores.

at 10:29 pm
Email ThisBlogThis!Share to TwitterShare to FacebookShare to Pinterest
Labels: toy review