The Little ones like construction play, all three of them can regularly be found building and creating in a huddle in the corner of the living room. The latest creative toy they have been getting to grips with is Kid K'nex which has kept them all occupied quite a while (and Daddy too!) 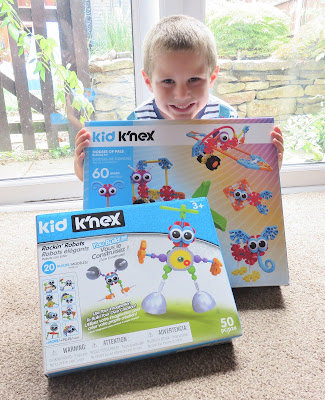 We were sent to review two sets from the Kid K'nex range. The range is aimed at ages 3-6 as the younger style of kits then children can move onto the older range Core K'nex. K'nex is a colourful fun system of connectors and rods and other parts used to create all sorts of 3D structures in open ended STEM style play. 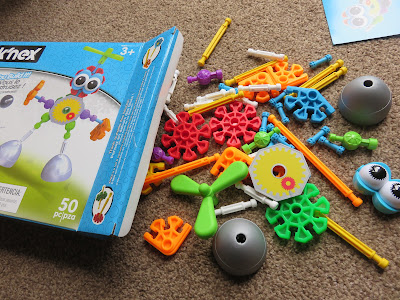 The first box we received was the Rockin' Robots set (RRP £19.99) with 50 Kid K'nex parts and pieces including a cog, eyes and 'elbow' joints. The included instructions showed ways to make 20 different robots from little 3/4 piece ones to others using most of the set. 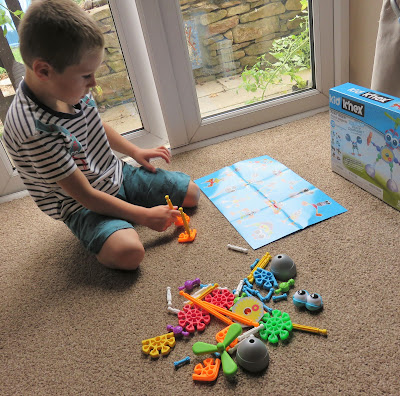 Little 3 got stuck in straight away following the instructions and made several different bots with ease. The pieces clip together easily and are not difficult to dismantle yet they stay together during play. the bright colours are attractive and there are plenty of connectors in the set to create a range of different style bots. 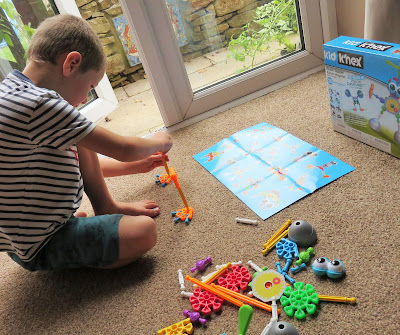 It wasn't long before the girls wanted in on the action and we opened the second box. The three of them spent ages building and creating using all the parts of which there were plenty to go around. 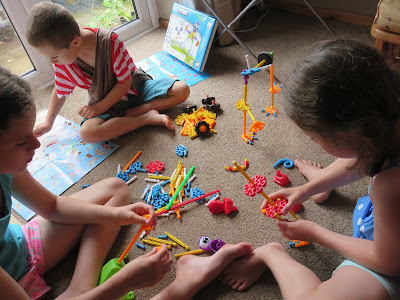 The Oodles of Pals set (RRP£29.99) contains 115 different parts including eyes, feet, wheels and many cogs and connectors as well as flexible parts allowing plenty of creative designs from the smallest to the biggest creation. 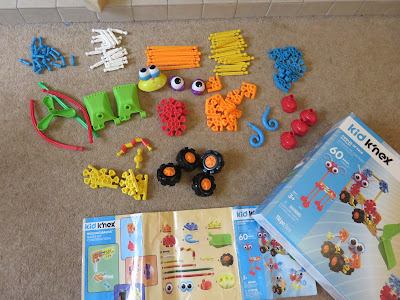 The range of piece sizes and amount of connectors meant that the Little Ones could all build something small or club together and create a bigger design. There are 60 suggested model ideas in this set and several types of eyes, feet/wheels mean that everyone is happy. 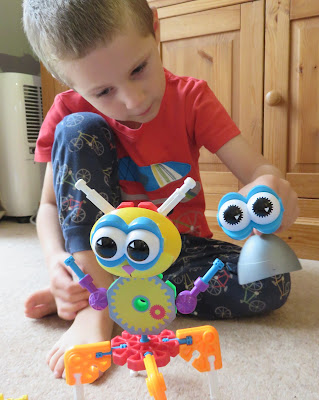 I love that there are so many ideas included with the sets, the large colour pictures make it easy for 5 year old Little 3 to follow the instructions and make his creations without help which always pleases him.
The simplicity of the designs and the numbers of pieces included in the sets means that building doesn't just stop there, he can add, change or develop his toy just how he wants like he did here changing his aeroplane, that was made using the instructions, into a convertible helicopter/digger which he was super proud of. Kid K'nex is available at Smyths and Argos and other good toy stores, Little 3 has put the Safari Mates set (£12.99) on his Christmas list already. Kid K'nex is robust and well priced for the amount that you get. I think it will be well loved here.
at 9:17 pm
Email ThisBlogThis!Share to TwitterShare to FacebookShare to Pinterest
Labels: review, toy