Gymnastics at home, it's not the same

The arrival of lockdown came at a time when both the girls were training hard for the beginning of the acrobatic gymnastics competition season. Last year Little 2 wasn't ready to compete having moved up to the Junior Elite competition squad just as the season had started and Little 1 wasn't yet at competition level. 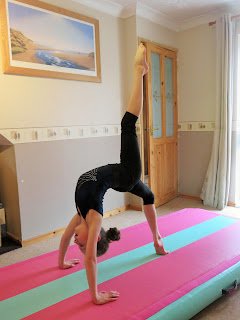 We knew the closure of gym was on it's way, everything except training and school had stopped, it was just a matter of time. The announcement came from the government and British Gymnastics on Friday evening in a broadcast at the very moment Little 1 was in a tumbling training session. The girls were sat down and told there would be no more training the next day and until further notice. 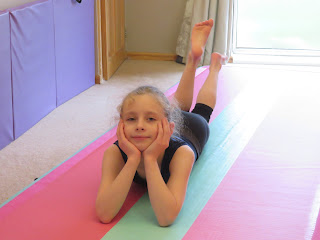 A strange mood settled on the girls, gymnastics training is a big part of their lives and between them we were at the gym 5 days a week for a total of 16 hours training. Our life pretty much revolved around school and gym, home from school it was a quick snack, changed and off to training for one or both of the girls. Sometimes I would stay home with Little 3 and cook tea while the grandparents kindly took the girls to gym, other days we would all go and often stayed to watch.
With school having ended earlier that day and now gym too the girls sat silent in the car on the way home. With no school and no gym life was going to be very different for a while. While both girls were disappointed that they could not train they took it in their stride and enjoyed not having to get up early for training the following day, a Saturday. 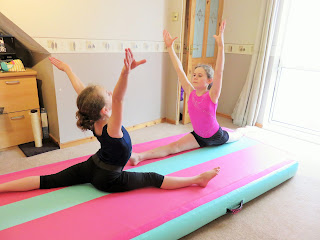 Gym sent both girls through a home training schedule with things such as stretches, conditioning, flexibility work, block/weight work for Little 2 and things to practice and develop that could be done safely at home or in the garden like the splits and handstands. 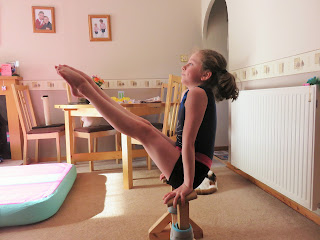 The girls got stuck into their home training during the first few weeks of lockdown, a jog around the block, a warm up and then through the list of exercises, it took them a little over an hour to do it all and they diligently did the training twice (sometimes more) a week. 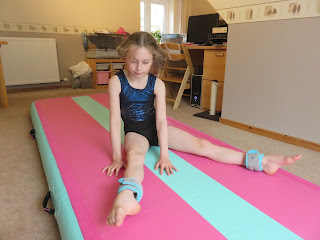 As well as the training schedule, the girls were pretty much upside down permanently practicing handstands and cartwheels as often as they could and completing daily gym challenges set by their gym such as holding the longest plank (both girls gave up together on the 7 minute mark!) and seeing if they could do a gym move with a parent. It kept them going and they enjoyed it but both said they missed proper training. 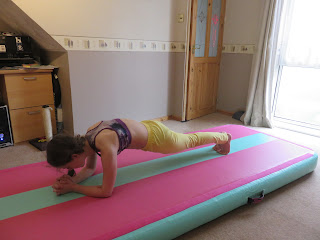 10 days into lockdown was the date of Little 2's first competition of the season, she and her partners had worked hard for several months practicing moves and learning their routine which had been coming along nicely. The date was written on her calendar and she had been excitedly crossing off the days, we were to travel down, stay overnight and compete but it wasn't to be. 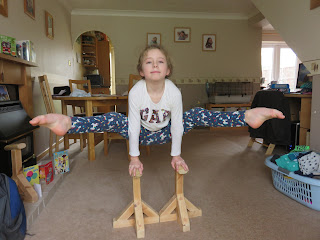 I didn't say anything to her on the day but I could tell by her behaviour that she knew it was the day she had been supposed to do her first regional competition, she was pretty quiet and stroppy all day and wanted lots of cuddles. Later that evening at bedtime it all came out though, a few tears and a little girl who was really missing gymnastics, she wanted to be back in the gym, learning new moves and seeing her gym friends. Gymnastics at home was not the same, cartwheels and stretches are boring and she simply could not do the thing she loves. 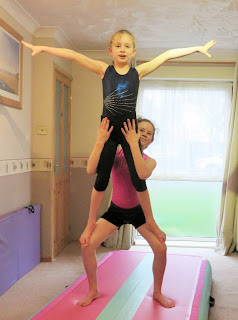 As the weeks went on the girls began to struggle with motivation, they had been home training for 6 weeks and doing really well, both girls had improved their flexibility and Little 2's block work was coming along nicely but training by themselves was getting boring and they stopped following the worksheets if favour of a 'do what ever they want' approach, they were happy and I wasn't going to make them do the set schedule. 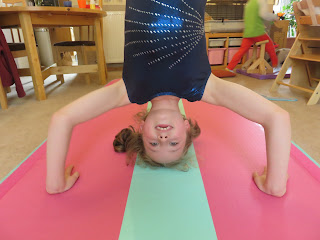 Little 1 spent an awful lot of time on the trampoline practicing her tumbling skills, she spent time improving her flics and getting them neater as well as practicing her front and back somersaults and focussing on the correct position and sticking her landings. 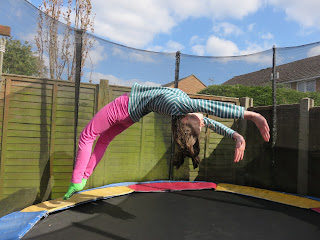 She got better at front fly springs and can do them without jumping beforehand as well as somersaults now. She had been practicing whips back in February but her coaches said they would prefer her not to practice those at home as gymnasts can develop bad habits out of the gym learning a new skill which then takes a long time to correct so she has stuck to what she has been taught and is pleased at her progress. 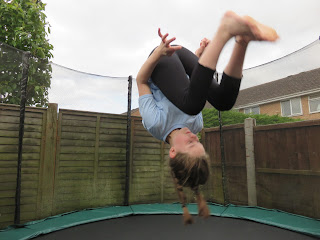 Little 1's coach began doing some Zoom gymnastics sessions just as the girls interest was starting to diminish in the home training schedule, she was happy for Little 2 to join in her sessions too, and so the girls got stuck into online gym twice a week from mid April.
There was plenty to practice in the front room, mostly stretches and conditioning and it was great for the girls to see their gym friends and talk to their coach but it still wasn't the same as physically being in gym. Little 1 misses running down the trampoline track to practice her tumbling and Little 2 misses learning new skills and being thrown around in the air by her bases, she is constantly reminding me that she misses gym the most out of everything. 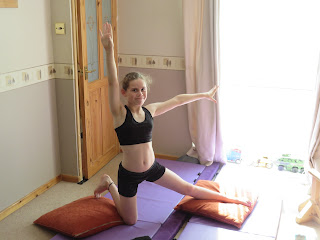 The girls are hoping it won't be too long before they are able to do gym again but I think it will still be a while before they are back in the gym. Even when they do go back they will probably have to distance from each other and that means no acrobatic gymnastics in their partnerships will be possible so their time will be spent working on strength, conditioning and flexibility and maybe individual moves too. 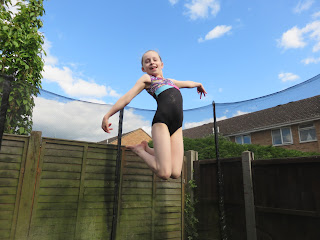 The girls don't care though, they will just be happy to be in the gym again. Little 2 tells me as long as she is doing gym with her squad she is happy though I know secretly she can't wait to get back to practicing her routine and mastering her platform catch she was working on.
at 3:30 pm
Email ThisBlogThis!Share to TwitterShare to FacebookShare to Pinterest