We are just over four weeks into lockdown and quite frankly no one knows how long it is going to last, we are spending a lot more time at home than we are used to and boredom is beginning to set in at times. Imagine the looks of delight on the Little Ones faces when they saw the contents of a rather large box that arrived for us one afternoon, a huge bundle of games. 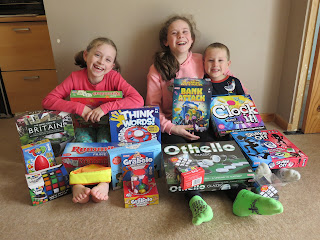 The lovely people at Ideal Games sent us an enormous box of games to keep us entertained while we are at home and they really have been a life saver. We have had many a short game of something during the day or when one child needed a little break from the others and several afternoons all together and an evening with the girls here and there. 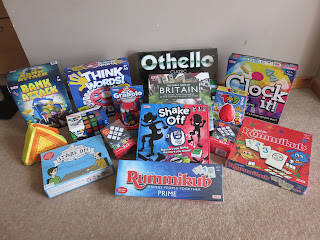 The first thing out the box was the good old classic Rubik's cube, Daddy used to have one of these as a child. The girls couldn't wait to get them out the boxes to have a go, they have been played with so much, a time filler whilst waiting for tea, something to keep their hands busy or when a bit of alone time is needed. I have noticed Little 1 sitting playing with her Rubik's cube a lot, she managed to complete one side quite quickly and is just one square away from having two sides complete, no one is allowed to touch her one in case they mess it up. 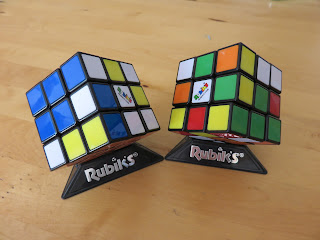 Another Rubik's product which has been an instant hit is the Rubik's cage game, consisting of a cage and 24 coloured blocks. The aim of the game is to get three of your coloured cubes in a row.  Up to 4 players each have a selected colour (or two colours if only two people playing) and on your turn you can do one of three things, drop in a new cube, flip the cube 180 degrees or twist one of the cube levels around- but be careful what you do may help your opponents as well as yourself. 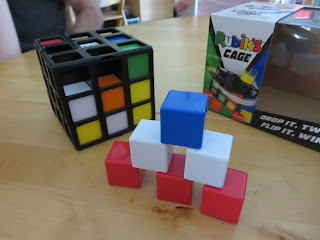 A tactical game but one the whole family can play, even 5 year old Little 3 has played. The game doesn't take too long to play each round, it is fun as you don't know what anyone is going to do next and everything is stored in the cube so you can take it along with you anywhere, we will be taking this one camping later in the year. 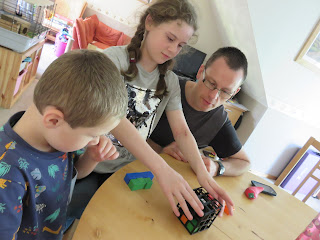 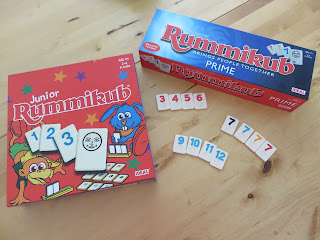 We have spent a couple of afternoons playing Junior Rummikub, the idea is to get 'runs' of tiles by laying down 3 or more consecutive numbers i.e 3, 4, 5, 6 in a colour or colours with the same number i.e red 4, blue 4, green 4, black 4 or adding to runs already on the table to earn stars. The player with the most stars at the end wins. 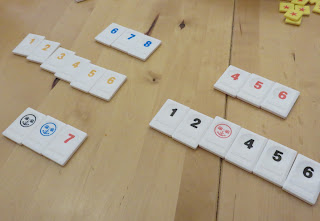 The game is easy to play and this simple version uses tiles up to 10 so if your child can count 1-10 then they can play, it helps with ordering, logical thinking and number recognition too. We have enjoyed playing this game as a family of five, it is fun and fast moving especially when Daddy plays, he seems to have the most logical mind out of us all. 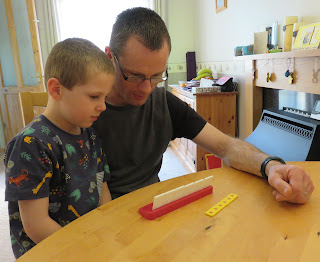 Once Little 3 has been in bed we have pulled out Rummikub Prime a few evenings to challenge the girls a little more and see if we can beat Daddy. With 13 numbered tiles and the addition of tile racks and a fabric bag in this Prime version, as well as the tricky jokers who could either be handy or cost you a lot of points, there is lots of opportunity for strategy and the chance to outwit your opponents. Who will shout out Rummikub first and accumulate the most points? 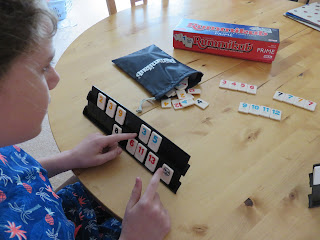 This version took a little longer to play with more numbered tiles to use but the girls easily switched from the Junior version to this and enjoyed adding up the scores as we played. 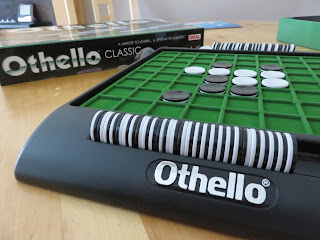 I have really enjoyed playing Othello, it was really easy to understand and I am getting better at it each time I play spotting more ways to trap my opponent. A fast paced strategy game for two players, the object of Othello is to trap your rivals disks and flip them to your colour, by having one of yours either side of theirs, but watch out as they will do the same to you. Who will end up with control of the board? 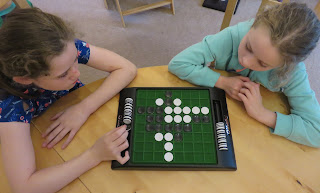 Even the girls got the hang of the game very quickly and have played it together over and over. Little 1 said ' I like Othello as you don't know who is going to win', and Little 2, well let's just say she is pretty good at the tactics side of things! 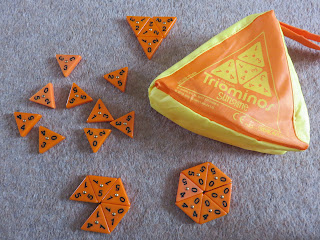 Little 3 has been getting to grips with Triominos Sunshine, a variation of dominos but with triangular shaped pieces. Each unique piece can only be used once so use those pieces wisely to score highly. Score bonus points by making a bridge, hexagon or double hexagon. Little 3 has been using the game to match numbers and practice his addition while the girls have enjoyed using strategy and logic to try and win. We have had this game out a lot this week especially the girls who keep getting it out to try and make those bonus shapes. 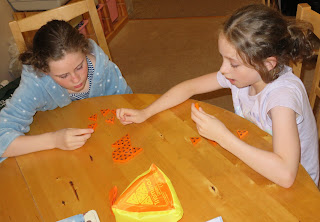 We have also enjoyed playing Grabolo and '7 ate 9' whilst Shake off has had us in stitches. Have you played any games lately?
at 6:36 pm
Email ThisBlogThis!Share to TwitterShare to FacebookShare to Pinterest
Labels: review