Sunday afternoons are for chilling in our house, there is no gymnastics on that day so we usually have a quiet one, we often go out for a walk somewhere but recently, with all the illness we have had, we have favoured staying in and watching films or playing games.

We have been reviewing these two games from Tactic games recently, Flags of the World and Wonders of the World, so what did we think? 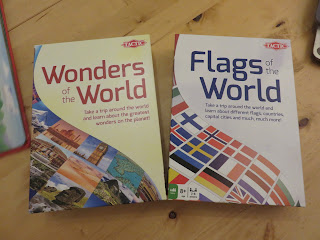 Both the games are card based and played in the same way, depending on whether you love flags or know your monuments, you might like one or both. 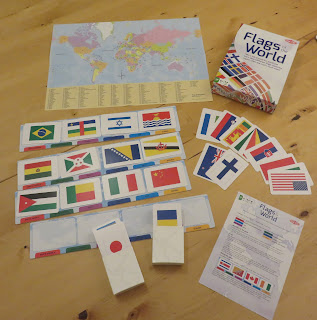 Take Flags of the World first, inside the box is a map of the world with the countries labelled by numbers, on the back is a page with all the world flags on it. 6 playing boards and decks of cards for 5 continents- Europe, Asia, Oceania, Africa North and South America plus two card holders.

The aim of the game is to get the most points by guessing the countries flags correctly. First choose which continents you want to play, we started with just Europe, but you can use whichever you like. For less players just use one or two and if there are lots of you then you need more. 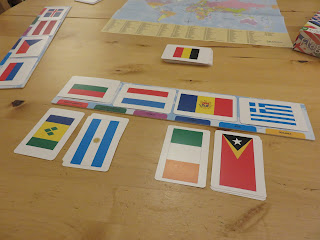 Each player is randomly dealt 4 cards and the rest go flag side up in a pile in the middle, these cards are the scoring deck. Set out your cards on your playing board and the game is ready to begin.

On the back of each card is the name of the county and some information about it's location and size plus two hints. 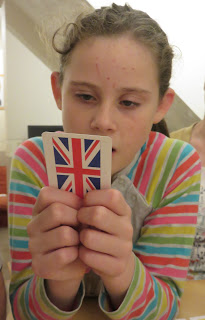 The first player chooses any of the other players flag cards and guesses where that flag comes from, if they are correct they win that card plus two more cards from the top of the scoring deck and they place them at the base of their board. If they guess incorrectly they get the first clue, a correct guess now wins them the card and one from the scoring deck, another incorrect guess and they get the second hint. If they manage to guess correctly after this third guess they win the card, if not the card joins the bottom of the scoring deck.

When you collect cards from the scoring deck you need to place them under your board on each of the continents you think the flag's country is in, correct placement here will score you a point at the end of the game. 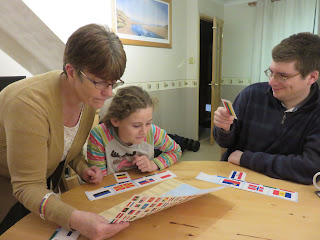 We found the game easy to play and the instructions simple to follow. We didn't really know many flags to begin with but after a few rounds we all had to agree that our world flag knowledge had improved.

We noticed that a lot of the hints mentioned where the country was on the map, which sea it was near or it's adjacent country so we used the map a lot to work out which country's flag was which, this helped all our flag and map knowledge.

Once the scoring deck has been used the game is over, just add up the number of cards you have or ones placed under the correct continents of you played more than one and the person with the highest number is the winner. 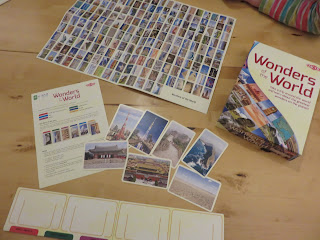 Wonders of the world is played in exactly the same way as the flags version but with cards of world monuments, landmarks or famous points of interest. We were all a little better at this version which can be made easier by just having to guess the city or country the landmark is in if you want to make it a but easier or child-friendly. 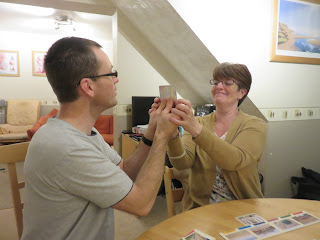 The only downside I can see to these games is that the cards are standard playing card sized so the words in the hints are rather small which some of us (Nanny!!) found difficult to read, the words on the map (which is about A4 sized) are small also, a bigger map would have been much better and easier to see. 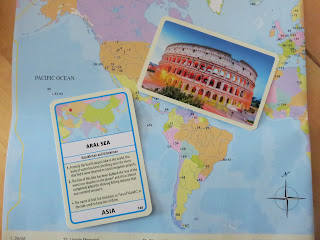 The monument cards would have been much clearer too had they been larger, it was hard to convince Little 1 that Hogwarts was not a wonder of the world and the card she had was in fact a castle in Germany! 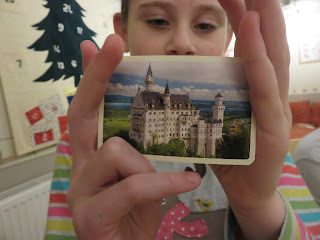 We had fun playing the games and were in fits of giggles trying to work out where flags and pictures were from without giving the game away. There was lots of map studying and we all learnt lots about flags, the world map and wonders of the world. 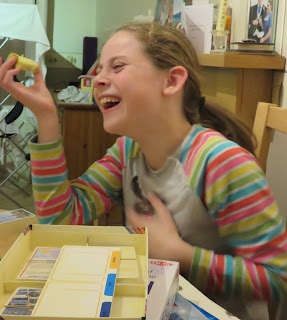 The games were stated as for ages 8+ but we found they might be suited to children a bit older with more world knowledge or well travelled than ours, Little 1 at recently turned 10 years didn't know many answers herself but was happy to join in and guess using the map and the hints or team up with an adult for help.

Flags of the world is available in The RANGE and selected Toymaster stores, Wonder of the World is available at Debenhams, RRP £12.99. We received copies of the games in return for this post.
at 2:55 pm
Email ThisBlogThis!Share to TwitterShare to FacebookShare to Pinterest
Labels: review