Getting stuck into 3D puzzles from Kidicraft

What do you do on dark winter evenings and soggy Sundays or even during the Christmas break? As the Little Ones grow older we are finding that we are playing more board games and doing more and more puzzles on days like those, we have dug out some old ones recently and this week we have been having a go at some new super 3D puzzles from Kidicraft. 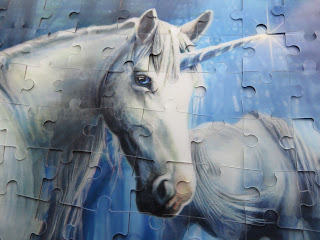 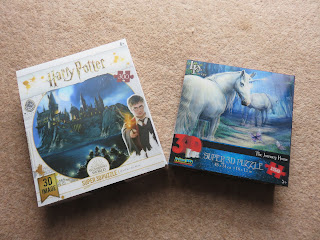 We got started with 'The Journey Home' one evening, these puzzles are flat normal style puzzles with 3D lenticular printing which means the pieces and pictures have depth and movement, the picture changes when you tilt the pieces giving you a 3D image when you look from above.


I like the fact that each piece is made of a strong material and the back of each piece is white, it is easy to see the right side of the puzzle pieces and they seem to click together and hold really well, the pieces don't break apart if you have put the wrong one in and you are taking it out. This also meant it was much easier to move a half finished puzzle off the floor when the kittens began running off with the pieces! 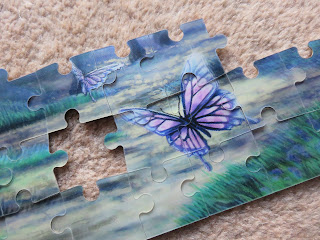 This particular puzzle is suitable for ages 5+ but I think it is too difficult for anyone that young, the puzzle contains a lot of grey, blue and dark green shades and wasn't easy to complete. It took over an hour for me to do after 7 and a half year old Little 2 gave up after 10 minutes stating it was too hard.

I think this was mostly down to the type of picture and artificial lighting, although we had the lights on, the pieces were very much the same in colour either dark blue/green or grey and all the swishy unicorn hair in different directions on the grey bits and path/tree patterns meant that matching pieces was hard.

I found it much easier to do if I moved around and saw the pieces in different light and angles, due to the depth in the image a piece might look blue on the carpet but if you pick it up and tilt it a piece of unicorn appears and you realise where it goes. Good lighting and the ability to move around the puzzle is essential with this one, the photo below was taken in the morning in daylight and is much lighter than the puzzle looked in the evening. 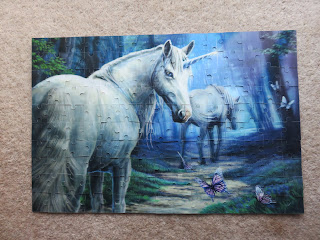 The final 3D image is lovely, so much so that Little 2 wants to frame it and put it in her bedroom, you really feel the front unicorn is there and the other walking away. The butterflies also look like they are flying and the leaves stand out (this obviously doesn't show up as well in the picture as in real life). 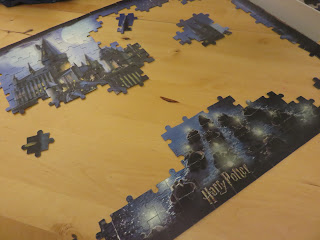 Little 1 and Daddy had a go at the Harry Potter Hogwarts puzzle in the daylight, even though the picture is a dark one they didn't find it too tricky, it took a couple of hours to complete. The pieces are different shades of blue and black so you could tell which area of the puzzle they belonged in making it quicker to complete and I am sure the natural lighting helped a lot as well. 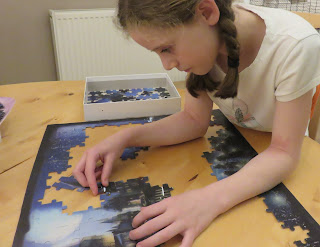 I do think the age of 6+ is ambitious again for this puzzle, Little 2 who is 7 and a half got a few bits in and ten year old Little 1 did a lot of the ones with the castle where there were lit windows to match up.

Although the puzzles are a little hard for younger children we thought they were a great challenge, we liked the fact we had to think about where the pieces went and that they weren't super easy and over in minutes. I do think it really depends on the actual puzzle you have too, both of ours were dark with not a lot of contrast in the images meaning they were more challenging anyway. 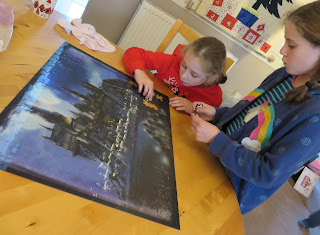 The final effect of the Hogwarts castle with the first year boats sailing across the lake was really good, the castle looked far way and loomed up out of the rocks, the boats at the front also looked closer than the ones deeper in the picture, the 3D effects in these puzzles are good and the girls want to do more. 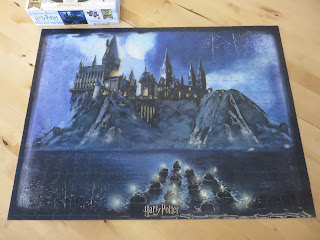 These puzzles and lots of others (with varying designs, colours and shades of pictures) can be bought online here from £5.79 as well as other fab 3D items like notebooks, bookmarks and placemats.
at 10:30 am
Email ThisBlogThis!Share to TwitterShare to FacebookShare to Pinterest
Labels: review