Have you heard of Fuzzikins? Cute fuzzy flocked pets that you can colour in and play with?Two years ago we reviewed Fuzzikins- cosy cats, both the girls enjoyed them then and they were played with for a very long time. The girls were lucky enough to get to choose a new playset each to review recently. 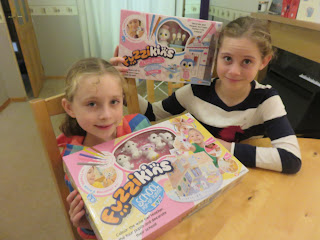 When we previously reviewed Fuzzikins they were not marketed as wash, rinse and re-colour but now with this added feature and the development of robust colour in playsets and accessories Fuzzikins are even better than before.  Little 2 chose the pop up school and Little 1 picked the ice cream parlour. 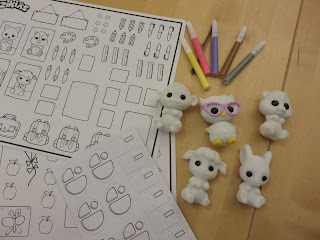 Fuzzikins Fuzzi school pop up playset (RRP£24.99) comes with a wise owl teacher and four students (hamster, lamb, monkey and mouse), 5 colouring pens and a huge assortment of stickers ranging from school bags, pens and school books to food trays and food for the canteen. 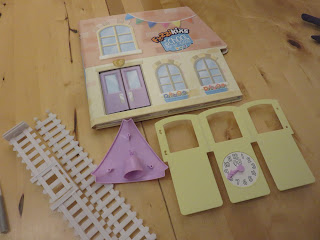 The pop up play set opens up to reveal three compartments and simply clips together with a bell tower and a fence surrounding the playground, doors that open and close lead to a school room with pop up benches and a wipeable whiteboard and a cafeteria complete with a serving hatch, a table and tray station completes the set up. 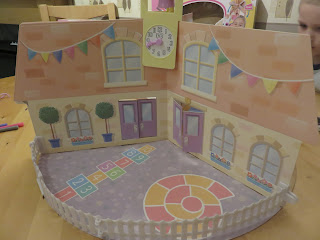 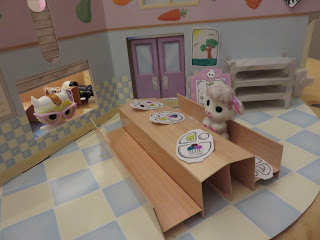 The Fuzzikins characters themselves are made with a fuzzy felt type material on the outside which is easy to colour on using the pens provided, the girls love designing and colouring in their Fuzzikin and imagining what their character would look like once they have finished. 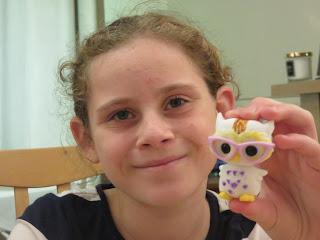 There is even more playability with these Fuzzikins as now you can rinse them in warm water and wash off the pen, dry them and they are ready to colour again. Little 2 has especially loved this feature and has been colouring her characters in all sorts of ways, she even drew brown splodges on her lamb pretending the playground had been muddy and another day she did patches of multi colour as apparently art was very messy that day! Each time, after she had finished playing with the scene she dashed off to the bathroom to wash off the pen, put her Fuzzikin to bed in a warm spot and not long later it was dry and ready to re-colour. 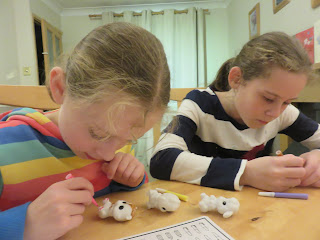 With lots and lots of stickers in the set there is plenty to colour, pictures for the wall, school supplies, toys as well as pretend cardboard food trays to use with the canteen and school books too. The Little ones set to work colouring in which kept them busy for ages. As time went on and they played with the kit more and more creating elaborate scenes and using the stickers to enhance their play. 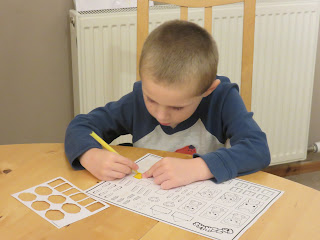 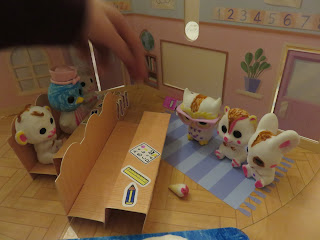 A big bonus is that the stickers are removable too so they can move them around a bit whilst they are playing or take them off if they fancy a change of scene. The Fuzzischool pop up play set was a huge hit with all three Little Ones and suitable from age 4+ even Little 3 plays with it too. 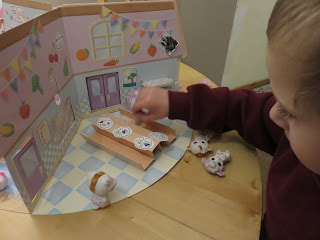 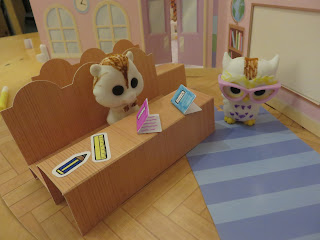 The Fuzzi Street ice cream parlour (RRP £9.99) comes with a penguin ice cream seller, an ice cream shack to colour in, an ice cream cart and six fuzzi ice creams, as well as that there are plenty of stickers to colour and a menu board with blank menus for you to write and colour too. We also discovered inside the product packaging there are more pictures you can cut out and colour with the characters from the other Fuzzi Street sets, the pizzeria and the post office which little 1 loved as she used the pizzas with the school canteen. 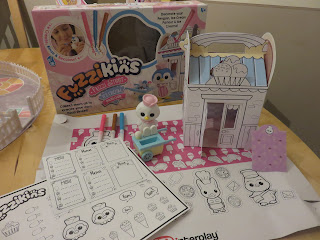 The girls set up some quite elaborate games with their school and ice cream parlour using the stickers to enhance their play. There was a colouring competition in class one day and there seem to be ice creams for pudding a lot in the school canteen.

The cardboard the sets are made out of seems quite robust and they are still standing firm after two weeks of play, the pens are still working well despite being used over and over again. With all the stickers and playability the set has, we think they are great value. 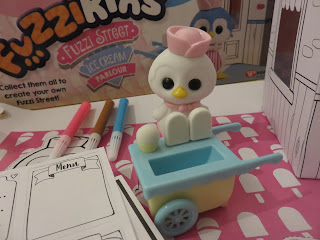 The girls love their Fuzzikins playsets, other Fuzzi Street sets are available including a post office and a pizzeria, as well as little Fuzzi babies with three pens, a bed and cute teddy are available at just £4.99.
at 11:29 pm
Email ThisBlogThis!Share to TwitterShare to FacebookShare to Pinterest
Labels: review, toy review