'Can we make bath bombs?' has been a saying I have heard over and over in the last few months. Both my girls are crazy about the things at the moment and after making them at parties and having received them as gifts they have been desperate to make some at home. They were both thrilled when we were sent some Fab Labs craft kits to review in the run up to Christmas and one of them was Bath Bombs. The other was a luxury home tye dye kit that Little 1 used for a fab bed makeover. 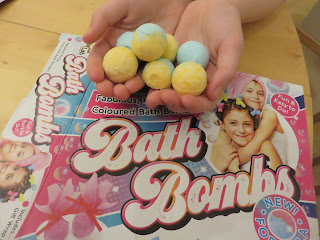 Little 2 and I got stuck into making the bath bombs one afternoon, the Fab Lab Bath Bomb kit (RRP £14.99) contained instructions, two bath bomb moulds, two protective gloves, two spoons, a plastic pot for mixing, a stick for compacting, a bottle of glycerine and a pipette, a tub of citric acid and two tubs of sodium bicarbonate (one blue and one pink) as well as some wrapping, 5 sheets of tissue paper and 5 ribbons and gift tags. 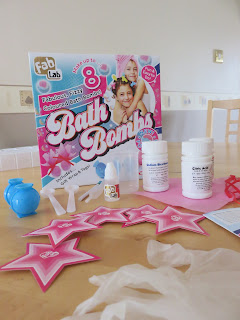 We read through the instructions and got set up. The first step was to decide what colour bath bombs to make, Little 2 opted for pink. She was a little disappointed to see that our pink sodium carbonate was actually orange but only for a moment as she couldn't wait to get started. 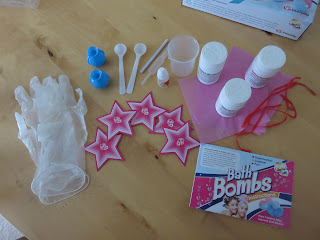 First you need two scoops of the chosen colour into your mixing pot with one of the spoons... 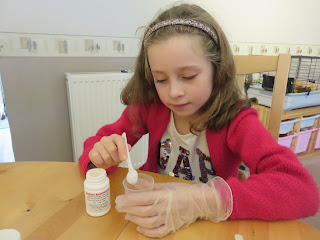 Followed by one scoop of citric acid powder using the other spoon. Citric acid can sting if it gets into cuts and can be dangerous if it gets into eyes so I made sure Little 2 was aware of this, she sat at the table with plenty of room and wore the protective gloves on the hand that was holding the pot incase she spilt any. Next you mix the two dry ingredients together. 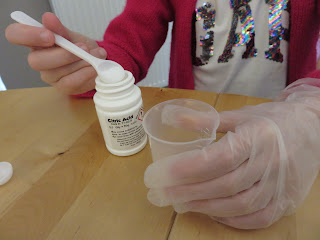 Once combined it is time for the glycerine, just a couple of drops according to the instructions. If the ingredients don't start to stick together then you can add a couple more drops- this can be tricky getting it right. 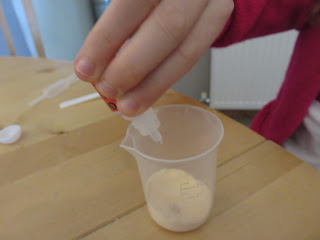 I was aware that too much moisture would ruin the bath bomb so we followed the instructions and only used about 4 drops of glycerine in our first one, just enough to make it stick when compacted in the mould, but the bath bomb disintegrated when we took it out of the mould which meant we hadn't used enough.

The second attempt we made we used a little too much glycerine as although it seemed fine and held well, once it had been out the mould a while it went a little soggy and lost its shape (it still worked wonderfully in the bath though). After that we got the texture right and needed around 8 drops of glycerine for each bath bomb. 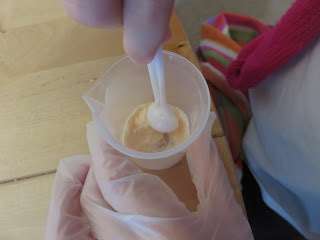 Little 2 carefully poured the dry ingredients into the mould and compacted it down with the stick provided, each 3 spoon mixture filled around half the mould so we mixed and matched the colours to make multicoloured bath bombs. 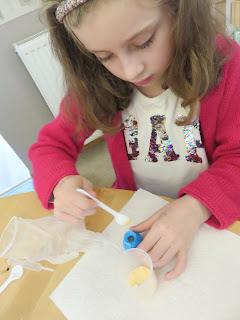 We had enough ingredients to make 7 bath bombs with citric acid and glycerine left over, the kits says it makes up to 8 which is true as we used heaped spoons of the coloured sodium bicarbonate and had we used a little less we would have had enough to make the 8th bath bomb.

We left the bath bombs on the radiator for a couple of hours and they hardened up nicely before a couple were used in the bath that night. They bubbled nicely and dissolved into a fine powder which wasn't gritty. 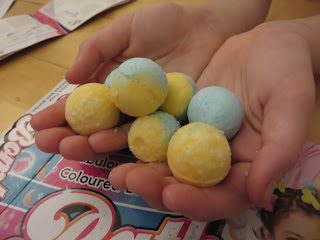 The kit contains some lovely wrapping so you could make little gifts with your bath bombs. 5 pieces of tissue paper, 5 ribbons and 5 gift tags. perfect for a stocking filler or mini thank you gift. Little 2 wants to give a couple to her grandparents for Christmas. 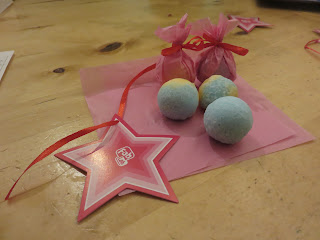 Did you read our review of the Fab lab luxury tye dye kit?.
at 10:35 pm
Email ThisBlogThis!Share to TwitterShare to FacebookShare to Pinterest
Labels: review