If you follow us on instagram you will know that the girls are crazy about gymnastics and in quite a short time they have both amazed us in their ability to learn new moves and test the boundaries of their confidence developing skills that I could only dream of being able to do. Their hard work and dedication has paid off and over the last few months there has been plenty of exciting news on the gymnastics front.

For Little 2 it all started just over a year ago in June 2018 when she joined her sister, who had started 6 weeks earlier, in attending recreational Saturday gymnastics classes. At the age of just turned 6 it was quickly clear that she was a natural at gym, flexible and keen she found it easy to learn new moves and by Christmas she had moved up through two more groups and was with children several years older than her.

At the end of January this year, after a fabulous session on the blocks, she was offered a place in the club Mini Squad. The club she attends is an Acro gymnastics club where the gymnasts work in pairs or trios performing routines with music and gymnastics moves, and this group is a stepping stone to the higher competition squads. She was thrilled to be asked to join the group and super excited when she started. 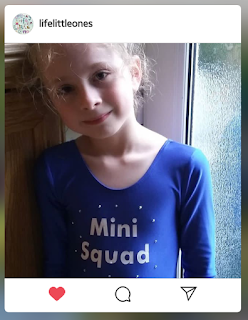 Gymnastics twice a week was tiring for someone who just turned 7 but we settled into a routine. A quick clothes change and snack after school and it was off to the gym returning for a reheated tea, bath and bed. Little 2 loved it though, she would come home beaming telling me everything she had learnt and while I battled to get her into her pyjamas so she could go to bed she would be doing cartwheels across the living room or handstands against the wall proudly showing me what she could do.

In the mini squad she was being taught to be a 'top', one of the little ones in the pair or trio that gets thrown around or stands on the others shoulders. Three months after she started in the squad at Easter this year Little 2's coach asked to speak to me after one of her sessions. Little 2 was doing well, so well in fact that she wanted to move her to one of the top Competition Squads, to be in a trio with two 11 year olds. It was like Little 2's dreams had come true, she was so thrilled and bounced around for days. 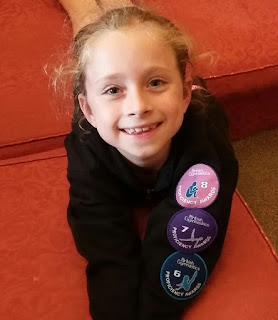 Initially she was going to be working up to the squad (as they train 8 hours each week ) joining one training session a week and continuing with the mini squad then moving to the Competition Squad permanently from July. However, after her first session in early May her coaches were so pleased they said, forget July and easing in, we would like her in the squad now.

I was surprised how easily she settled in, she wasn't completely shattered as I thought she would be coping with gymnastics and school, she would bound home from school, get changed and happily go to training or get up really early on a Saturday for the early morning session without fuss while everyone else was still in their pyjamas. She was soon learning new moves and balancing on her hands above her partners' shoulders or being thrown in the air and she utterly loved it.

At the end of June she took part in the annual club friendly competition. Her trio had worked hard on learning their routine and moves- everything was in place. The best part about the competition (according to her) was that it meant she got to wear a proper sparkly leotard like the gymnasts on tv. She was over the moon the day she found out which one was going to be hers. 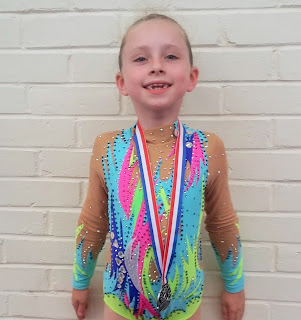 She was very excited but a little nervous on the day of the competition but when her turn came she stepped out on the floor confidently with a smile ready to go and do her thing. The routine went really well and the girls did themselves proud. 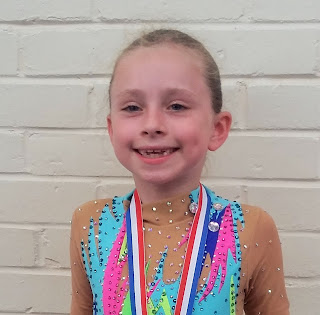 In their category the girls placed second earning themselves a Silver medal, hopefully the first of many. We were all thrilled for her and her trio too. 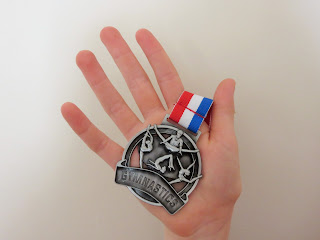 Little 2 has now been in the squad 4 months and the trio have moved up a level so have spent the summer learning new more challenging moves ready to add into their routine for the next competition season starting in the new Year. Sometimes I watch her train, climbing on shoulders and balancing there before somersaulting off, being thrown 360 degrees or jumping off her partners hands to land back there on her tummy. Most of the time when I watch my heart is in my mouth, I can't believe what my child is doing, she has no fear and totally loves it, my little gymnast.
at 11:14 pm
Email ThisBlogThis!Share to TwitterShare to FacebookShare to Pinterest
Labels: gymnastics