Chilling out in Cornwall- Hidden gems

So here I am about to write about what we got up to in Cornwall over half term when there are only a few weeks left of the Summer term. Life has been really busy here and I am only just getting the chance to catch up so bear with me... So here goes a Half Term break in Cornwall. 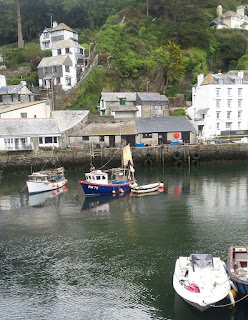 We had booked a week away on a Haven site near Polperro staying at Seaview Holiday Park, it was lovely there. The site was clean and staff very friendly, our chalet was spacious and well equipped, the Little Ones made daily use of the swimming pool and play area, we spent several evenings eating in the clubhouse while the children played games on the dance floor with the in house entertainment and explored much of the local area. We would definitely go back and stay there again sometime.

We were staying just up the hill from Polperro and not far from Looe, we spent some time in both towns exploring and visited both beaches. The Little Ones enjoyed skimming stones in Polperro harbour and exploring a cave there whilst the sandy beach in Looe was a great place for our final day away when the sun came out, we bought giant buns from the bakery there and spent the afternoon on the beach until the sun went down.

Whilst we were away the weather was a bit pants to be honest (except a hot, sunny last day and drive home), we woke to chilly drizzly rain most mornings and proper rain on two occasions, we tended to spend an hour in the pool until it had brightened up a bit and we had decided what to do. Being a family of five it can cost quite a lot on holiday entertaining the Little Ones so we tend to pick a couple of places we would really like to go that we have to pay for and then look for other things to do locally. We found some lovely places to go all within half and hour drive of where we were staying that we recommend a visit to.


On our first day it was wet so we headed to Carnglaze Caverns, the slate mine, only to find that they were closed on a Sunday (not mentioned in either of the leaflets we had) so with hungry disappointed children in the back of the car I searched the OS map for somewhere close by we could eat our picnic. Golitha falls popped up and a quick google on my phone showed walks and a free car park so off we went, it was literally 3 minutes down the road.

As it was raining we ate in the car and then donned our warm jumpers and waterproofs (we go out whatever the weather in our family) and set off on the walk. It was really lovely, hidden under the trees we were away from the rain and the path was wide and flat running along the river. The Little Ones swang on a tree swing and clambered over rocks and fallen trees while we walked the mile to the falls. The falls weren't actually falls but more of a rocky part in the river! Still nice to look at though. We walked a bit further on climbing up the hill side over rocks and tree roots as the path seemed to take us that way but it soon got quite steep so we turned back not wanting to lose anyone down the slippery wet slope into the river. Considering we would never have gone to the falls if the caverns were open we all enjoyed the walk and were glad we had found it. 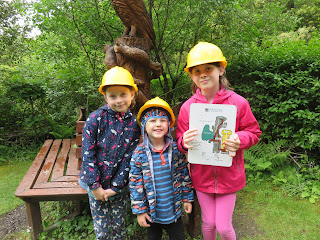 We returned to Carnglaze Caverns a few days later, with a torch and map in hand we guided ourselves around reading about how they were used to store gin in the war and how the slate was mined. There is a lovely subterranean lake down there which was so still and erie lit with lights shining out from under the water, chains hung from the ceiling where they once had hauled buckets of slate to the surface before the mine had flooded. 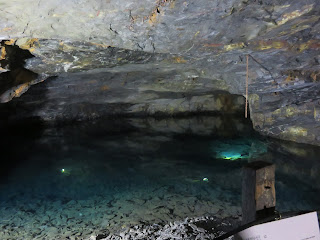 It isn't a large place to visit and after exploring the Caverns and walking the woodland walk around the fairy dell we had our picnic and were ready to leave after a little over two hours. Once again I looked at the map as it was far too early to go back to the site, I came across Siblyback Lake, another quick google showed it was a good place to visit so off we went. 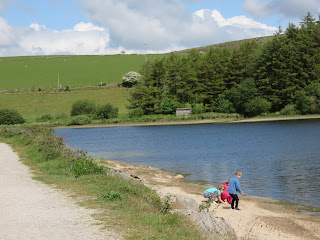 Siblyback was really lovely, a large reservoir with a 3 mile flat pushchair and wheelchair friendly cycling path all the way around, a tea room, huge play area and toilets all for the price of a few hours in the car park.  One minute you were walking along the open path along the edge of the lake and the next you were in woodland dappled with sunlight and wild flowers, then on a dam looking down at an enormous drop and back out onto the lakeside path again. The Little Ones enjoyed picking wild flowers, skimming stones and watching nature as we walked along. 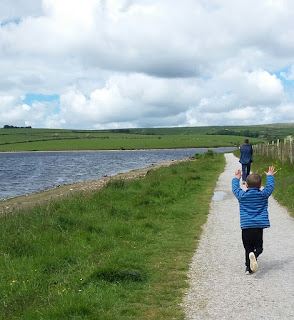 Once back at the car we sat with a snack and a drink on the bank while the children played, a slide, swing and climbing area, a sandy pit with play house and all sorts of other things kept them occupied for two whole hours while Daddy and I enjoyed the improved weather and chatted in the sun. Well worth a stop if you are in the area.

We spent a day at Porfell Wildlife park, an afternoon on a rocky rockpool beach looking for creatures and another afternoon driving a few minutes down the road to a coastal car park then taking a woodland play trail down to the beach where we built dams and skimmed more stones (the Little Ones seem to like throwing stones!) and getting soggy trainers. 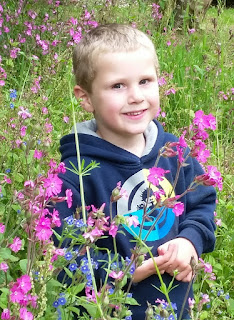 We are members of the National Trust so usually visit one of their properties while we are on holiday if there is somewhere nearby, there is always something for the children to do, trails in the houses or play areas in the gardens, woodlands to explore or dressing up. We spent a day at Lanhydrock and thoroughly enjoyed it there, the play area was huge and the large house and gardens were great to discover and explore. 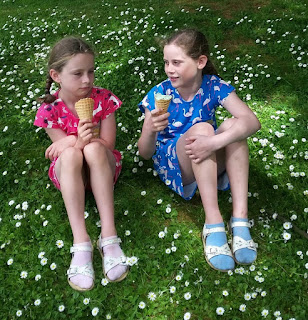 We also stopped at Knightshayes Court on our long journey home spending the afternoon wandering around the walled kitchen garden and rolling down grassy hills after eating huge ice creams. 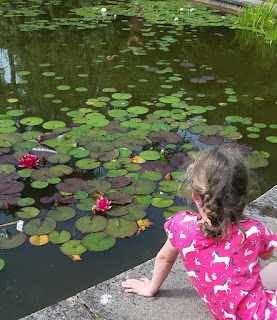 We had a great week away, it was one of those chilled family holidays where we all lay in in the morning, swam in the pool, ate out, spent lots of time outdoors playing, exploring and being together and came home feeling like we had all had a good time and happy.
at 3:03 pm
Email ThisBlogThis!Share to TwitterShare to FacebookShare to Pinterest
Labels: holidays