The Girls flip over Moji Pops

Collectibles are a big hit with the Little Ones right now, it seems whenever they get a little pocket money or are allowed a treat they ask to get more, to expand their growing collections or to see if they can find the ultra rare figure they haven't got. All three Little Ones love to play with them, and Little 1 really isn't one for playing with toys much anymore, the girls love to barter and trade to complete the little families or combine them all together and take over the floor. 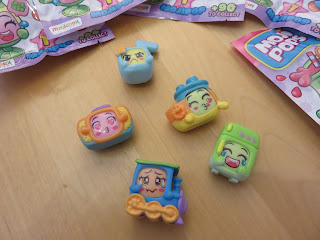 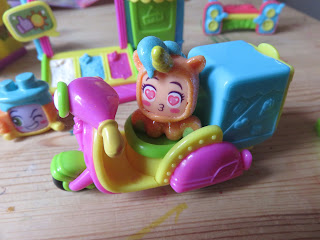 New and hitting the shelves this month are Moji pops, series 1, everyday objects brought to life as fun colourful characters. What makes these different to other collectibles on the market is that they have a removable double sided face featuring two different emotions based on the most popular emoticons, flip it over during play or even swap it completely, the girls are hooked. 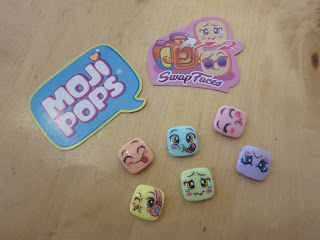 There are six different coloured face pieces with two different emotions on the sides, will your character be sleepy or happy, sad or cool? The faces pop out easily from the squishy characters and are popped back in place but they are secure enough that they do not fall out during play. 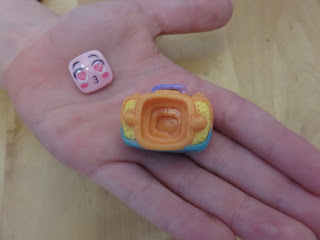 The little Ones love this element of the Moji Pops, Little 3 and I have been discussing what the faces mean and how the characters might be feeling and the girls have added an extra element of play to their games, with the ability to show their characters emotions they have had more fun when they have been playing games with them flipping the faces around as their imaginary scenarios unfold. 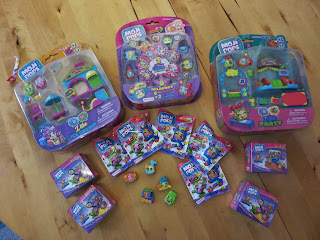 The current series 1 collection consists of blind bags containing 1 character, these retail at just 90p. I don't think I have seen such a bargain priced collectible in a while, the girls are keen to see these appearing in our local shops and even if they get the same character they had before the chances are it will have a different face! 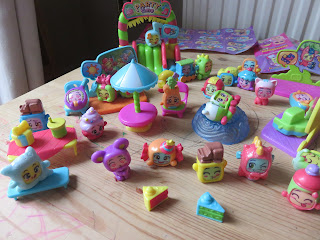 Alongside the blind bags they are story playsets, again a really reasonable price of £2.50, these come with 2 Moji Pops and a little stage scene with a cool graphic, there are 12 of these to collect, the girls have used them as beds, ideas for storylines, as tables and desks as well as setting out all their Moji Pops at bedtime, there are lots of possibilities. 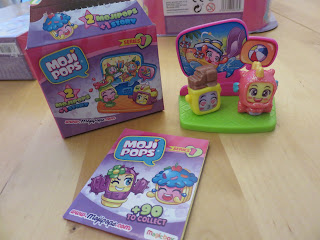 Blister photo pop sets (6 to collect) come with 4 Moji Pops and a photo pop (a frame like stage), then there is the Blister Glitter surprise set that we had in our bundle, 6 normal moji Pops and 2 hidden glitter ones (Little 2 was thrilled to find a unicorn in hers) this set retails for an RRP £10. 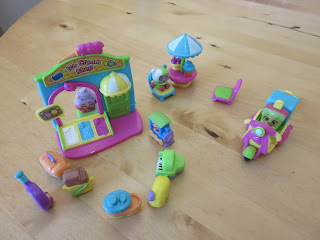 Then come the playsets (at a pretty reasonable RRP £12 I might add) we received 2 in our bundle but there are 4 to collect. Little 2 had the I like ice cream one with ice cream stall, a table and 2 chairs, a scooter with compartment, 2 mini ice creams and 2 characters and Little 1 had the I like party set with a bouncy castle slide, a dj booth, table and 2 benches, a mini gift, drink and 2 cakes as well as 2 Moji Pop figures. 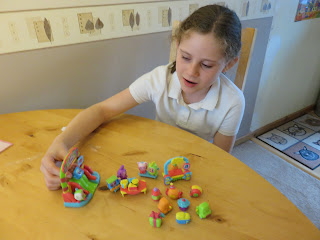 All three Little Ones have played lots with these figures, longer than they usually do with other collectibles, not just because they are new but the little extras in the playsets and the pictures on the story stages have given them lots of ideas for imaginative play. The emotions on the characters faces alongside the ability to flip them has added a new element of fun to their games too. 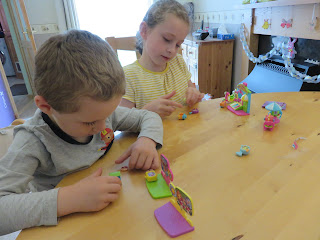 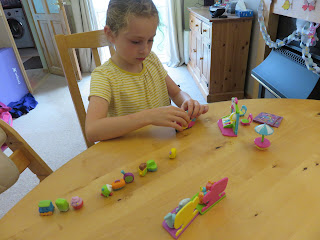 There are over 90 Moji Pops to collect from the worlds of pets, home, nature, travel, music, food, sport and ultra rare glitter, each world has six different characters that come in two different colours. 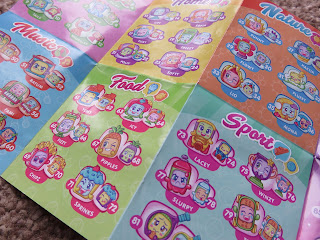 What I love about these is the bright colours, oh and did I mention that they are squishy, Little 1 thinks that is their best feature while Little 3 like popping out the faces and swapping them around. I love that they are a better price than some collectibles and would make perfect gifts or little pocket money treats.

Moji Pops are suitable from ages 5+ due to the small parts.

N.B We were gifted the products shown.
at 10:00 am
Email ThisBlogThis!Share to TwitterShare to FacebookShare to Pinterest
Labels: toy review