The Falconer's Quest at Warwick Castle

Bank holiday weekends usually mean a day out for us as we all have a few days off together, so last weekend we took a trip to Warwick Castle, somewhere I have never actually been before, to see the castle and grounds and to check out their new Bird of Prey show, The Falconer's Quest. 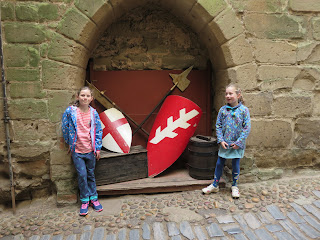 After a bit of a trek from where we had been directed to park the car in a field, we arrived at Warwick Castle entrance. We checked out the activities and events board deciding what everyone wanted to do, where we needed to be and when, then picked up a map and headed on in. 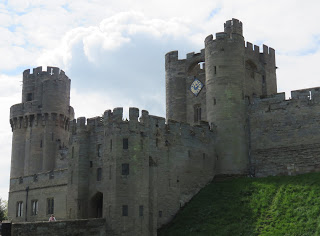 We happened to arrive out the front of the princess tower part of the castle just as they were about to start a storytime, with the two youngest keen to go in we ascended the stairs into a room to wait for the princess. Photography was not allowed in the tower rooms so there are no photos of the story time but the Little Ones took part in a short session where they had to answer a riddle and help the princess free a prince, even Little 1 who said she was a bit old for princess stories came out smiling. 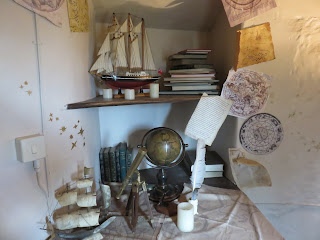 We went to the arena area and listened to the Trebuchet talk and were pretty glad we didn't live in the olden times as we found out why enemies used to fling poo over each other and admired the giant machine across the river. 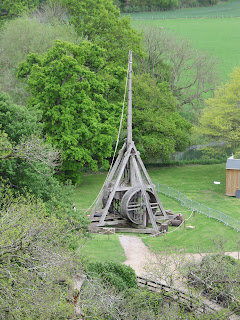 Then it was time for the event we had come to see, as we sat down with our picnic on the grass to await the start of the show, I could tell it wasn't going to be any old Bird of Prey display, and I was right. 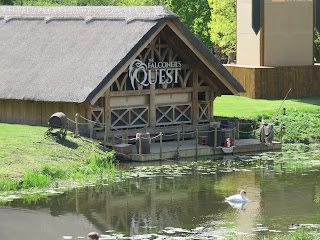 The new show is the biggest bird of prey show in the UK with Cheeky Red Kites right up to the Andean Condor who stands at 3 feet tall and with a wingspan of 10 feet he looks pretty impressive in the sky. The show combines the story of 'The Falconer's Quest' alongside stunning birds and aerial acrobatics with a few bird facts thrown in, it is much more entertaining than an ordinary Bird of Prey show. 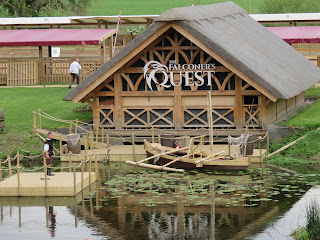 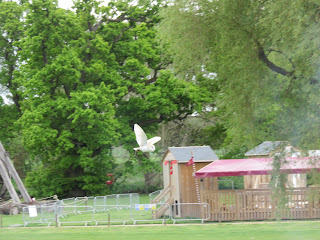 The show is rather like a story, following the falconer on his quest to find birds of prey to bring back to Warwick. Whilst the story is pre recorded the falconer arrives by boat and there is a theatrical element to the show which made it interesting. 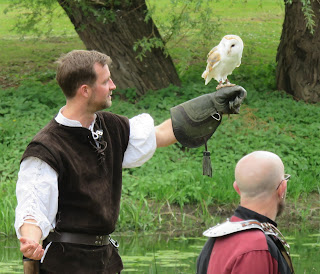 Birds appeared from the side or back of the arena in time to the story rather than being collected and brought out like most shows I have been to, this made it all the more enjoyable as I wasn't quite sure where a bird was going to appear next. 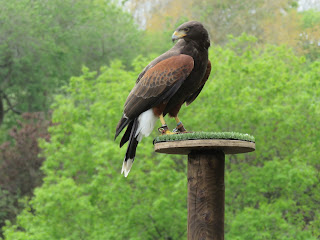 The show contained at least 7 or 8 different breeds of bird, some smaller and well known like the Barn Owl and Peregrine Falcon and others like the Vulture and Condor I had not seen before. The wingspan on several of the birds was huge and every one of them circled the spectators, flying low across the river or high up to platforms, it was quite a sight. 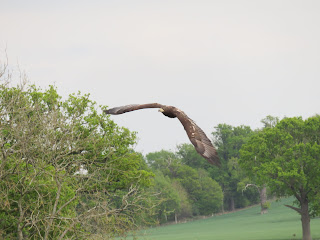 I have seen many a bird display in my time but it was clear watching this one that the team of handlers were very skilled and the birds were highly trained and that both enjoyed what they were doing, the handlers had genuine smiles on their faces and the birds were happy circling around and responded when they were called. 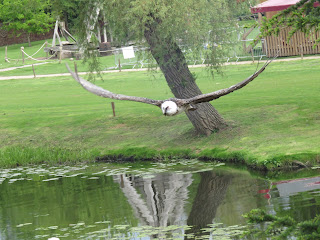 As the show was coming to an end something happened that I was really not expecting, we were concentrating on the last bird and suddenly there were 10 (maybe a dozen) birds in the air all circling around the Falconer and filling the sky, the audience, including me, were awed and gasps of 'Wow' could be heard from all around. The sight was so spectacular that I had to go back and watch the second show later in the afternoon as I really wanted to see it again. It was well worth it and I really enjoyed both shows. 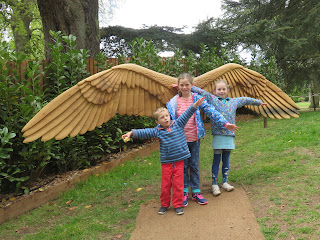 With the show over we headed back to the castle to have a look around at the 1100 year old history to see what was in the Great Hall and if we could picture ourselves years ago using the fancy staterooms. 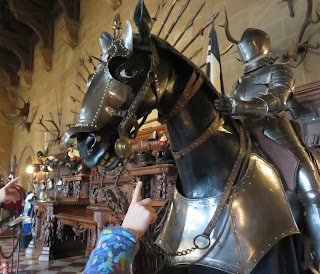 There was plenty to look at indoors from suits of armour, even a child sized one, to beautiful stained glass windows, pictures and artefacts. The Little ones took it all in and admired the views from the windows too. 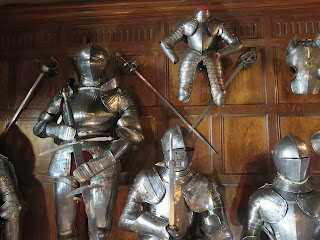 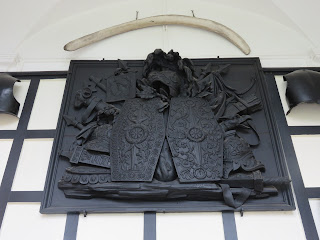 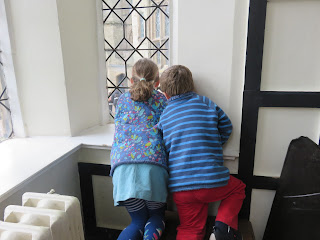 Outside again we climbed the Conqueror's fortress and read about the history of weapons which Little 1 was particularly interested about as she is doing the Saxons and Vikings in school at the moment. 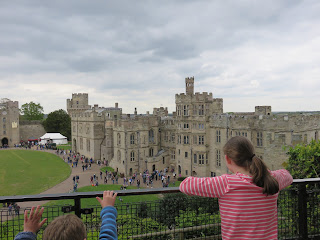 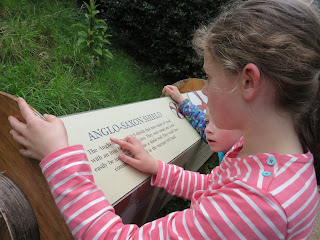 Then it was time for Knight School, the Little Ones lined up with lots of other children brandishing all sorts of swords and weapons bought from the many stalls around the site as well as a few children with sticks from nearby trees (we were in the latter group and managed not to be persuaded to buy three foam swords by the Little Ones). 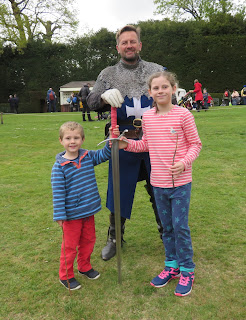 There were plenty of laughs and giggles, not just from the children, while the training happened and they were taught some moves all lined up moving as one with their battle cries heard across the gardens. I took a few cracking photos of Little 2 looking like she was really meaning business at one point thrusting her stick sword and another of the group swords held high shouting moves together but those photos contain pictures of other people's children so I can't use them here. 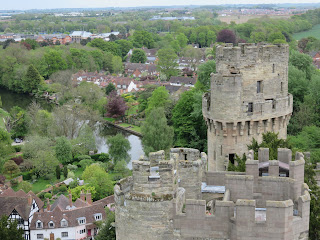 It was nearing the end of the day and we still had a few things to do, we set off to climb the battlements, over 530 steps up the top of the towers, down again and across to the next tower. 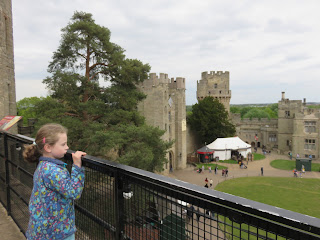 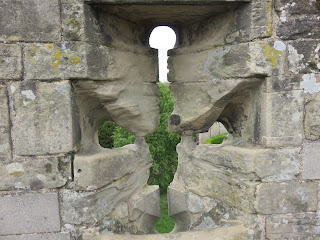 I was surprised that not one of the Little Ones complained about all the steps and pleased to see that none of them are particularly bothered by heights as we looked over the edges at the little people below and took in the surrounding scenery. 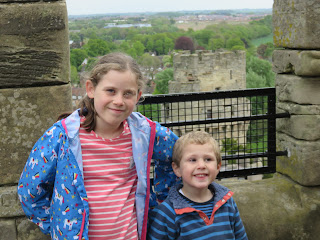 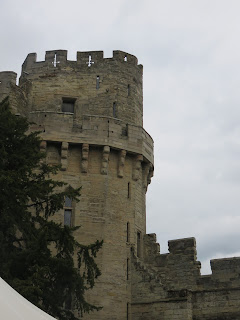 All too soon it was almost closing time, we didn't actually get time to see everything and missed a couple of tower exhibits and the Mill and Engine house but one thing the Little Ones wanted to do was visit the Horrible histories maze. 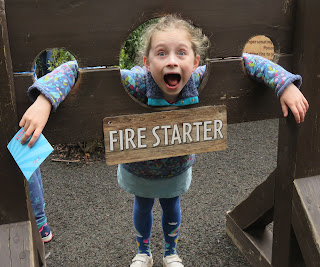 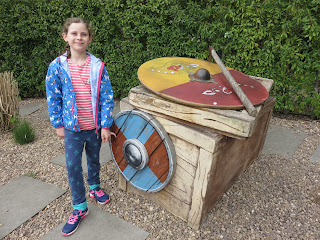 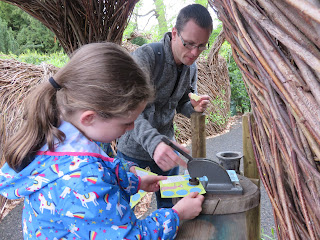 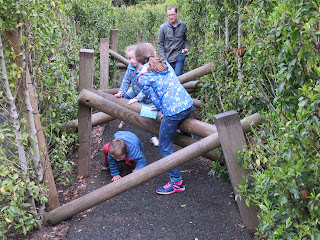 It was by now closing time, we had been at the castle for over 6 hours and it was surprising how much there was to see and do, apart from watching the falconry show twice and Knight school we hadn't stopped to sit down all day. Little legs were quite tired and within minutes of starting our journey home all three children were fast asleep, a sign of a good day out. We enjoyed our day at Warwick Castle and I especially enjoyed the Falconer's Quest show, if you haven't seen it yet you should.

We were gifted tickets to the castle in order to review The Falconer's Quest but rest assured everything I have said is true we really did enjoy our day out.
at 11:10 pm
Email ThisBlogThis!Share to TwitterShare to FacebookShare to Pinterest
Labels: days out