A smashing Easter egg hunt with a difference

Sometimes I think the Little ones get too much chocolate at Easter (too much chocolate, who ever heard of such a thing!), an egg from school, a friend, the grandparents and a local egg hunt near us and of course a couple of little bits from the Easter bunny on the day itself. While we don't go overboard with chocolate sometimes I think something a little different would go down just as well. 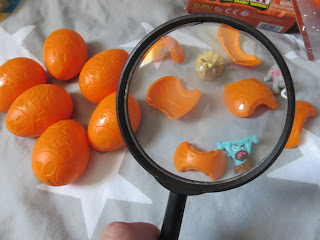 This year we had the opportunity to do just that. We were asked to review the New Zuru Dino Smashers series 3 and they were just perfect for an alternative egg hunt. The new series 3 Dino Smashers are, according to Little 3, super cool as each orange egg shaped smasher holds a collectable character inside and all you have to do to release it is, you guessed it, smash it. The eggs are rebuildable so if you have a destructive child like mine who would smash these eggs all afternoon then you are onto a winner, provided Daddy doesn't mind rebuilding them constantly, I haven't quite got the knack yet. 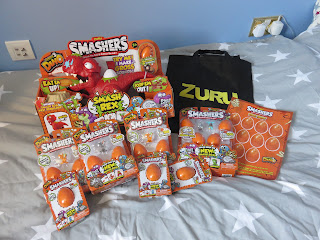 We were sent a large bundle of Smashers and set up an easter Egg hunt for Little 3 on Easter Sunday, with him finding the Smash Rex dinosaur last but I will tell you about him later. 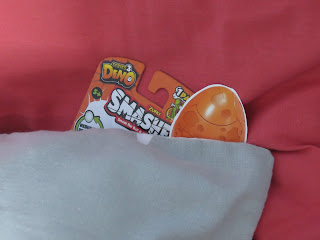 While Daddy occupied Little 3 I hid the Smashums eggs, wrote clues on clue cards and then we were set. I handed him a clue (a picture as he can't read) and his trusty magnifying glass and off he set. 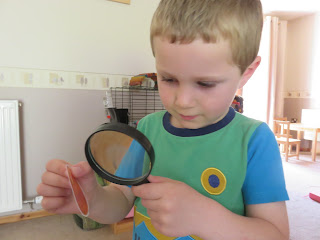 I have to be honest and think the girls did more of the egg spotting than their brother but he enjoyed the next bit the most. Having had a couple of previous season Smashers he knew exactly what to do with his eggs when he found them. 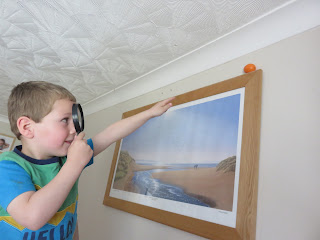 Some eggs he crushed in his hands and some he threw to the floor to smash and reveal the collectible figure inside, being allowed to break stuff brought big smiles to his face. This series there are dino-inspired characters to collect, there are cavemen and pre-historic creatures, dinosaur heads, mutants, robots.... 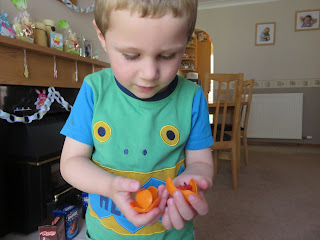 ...and limited edition collectables, we found both a gold and silver one in our selection plus also this fossil rock which Little 3 thought was great. After removing the plastic wrap we had to put it in water and rub to dissolve the coating, inside was a bright blue fish fossil, apparently that was 'Wow!' 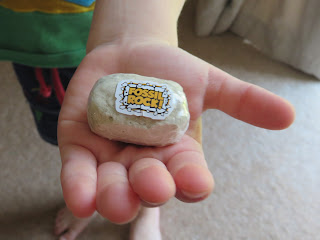 The last thing Little 3 found on his hunt was the Smash Rex playset which consisted of the Smash Rex himself, an egg and limited edition collectable as well as a nest to help you hold and rebuild the eggs -it definitely helps. 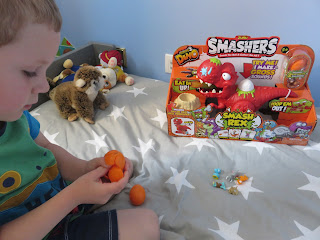 I had kept back a few eggs ready to use with Smash Rex, Little 3 thought the dinosaur alone was great, you see he has a button on his back that makes him make rude noises, this is all I have heard for the last few days! 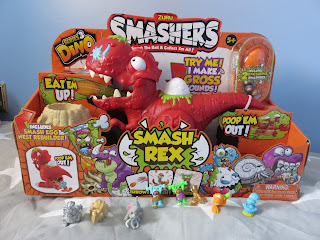 Smash Rex takes in account that kids just love bodily functions, you put an assembled egg in his mouth or you can grab his tail like a handle and try to get one off the floor, once you have the egg or two inside.... 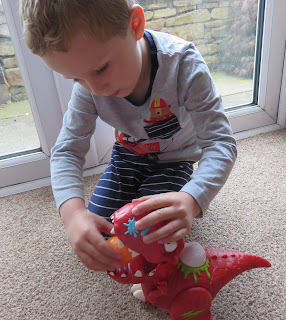 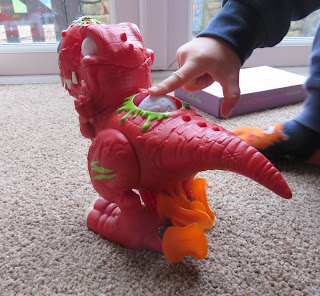 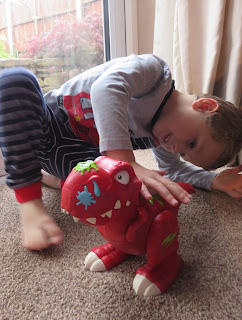 Little 3 loves this function and gets us to rebuild the eggs all the time so he can break them, he spent an hour doing this Easter Sunday until we gave up rebuilding. He likes the figures he has and is happy to line them up, roar the dinosaurs and put them back in the eggs for re-smashing as well as playing mini games with them, if his friends had them he could swap them too. 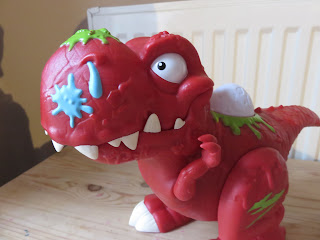 Little 3 really enjoyed his alternative easter egg hunt and didn't mention chocolate once. Smash Rex has been a bit of a hit with Little 3 too but he does love his dinosaurs, his sisters are not allowed to come anywhere near the collectables and his favourite is the fish fossil, I quite like the wooly mammoths myself. There are over 100 to collect with an ultra rare skull smasher hidden in a super tough shell to find with all the smashers having a smash point value ready for trading. 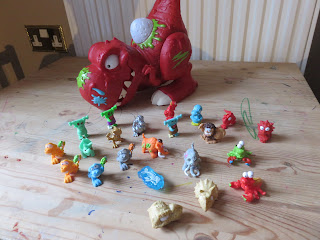 Series 3 Zuru Smashers come in one, three and eight packs, from as little as £1.99 and go right up to £19.99 for the biggest set. There is a Dino collectors egg which comes with a limited edition smasher and can store 50 Smashers inside as well as the Smash Rex Playset too. Suitable for ages 5+ Smashers are available nationwide.
at 2:24 pm
Email ThisBlogThis!Share to TwitterShare to FacebookShare to Pinterest
Labels: Easter