Dear Earthling- Letters from an alien and an interview with the author, Pen Avey

With three children in the house and all big reading fans we have quite a vast library of books when it comes to choosing what to read. Little 2 tends to favour books about fairies, princesses and happy endings while her bigger sister is into magic, adventure and funny stories. We were recently sent a new book to read, different to our normal kind of book, Dear Earthling: Cosmic correspondent... 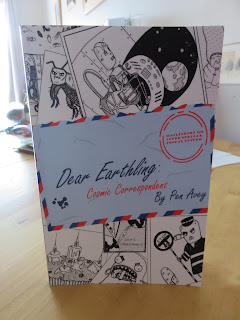 Dear Earthling: Cosmic correspondent, written by Pen Avey, is a fun-filled hilarious book all about Dethbert Jones, a normal ten year old- apart from the fact that he lives on the planet Crank with his pet chickensnail, Precious, and his best friend, a robot named Andi Social.

When Dethbert and Andi join the space cadets they are looking forward to the fact they could go to Space camp and might get to drive a real space shuttle. The girls liked the sound of the book, a bit different from their usual book of choice, but the promise of giggles and being fascinated by what a Chickensnail really is, as well as the illustrations on the cover, drew them in and they fancied giving it a go. 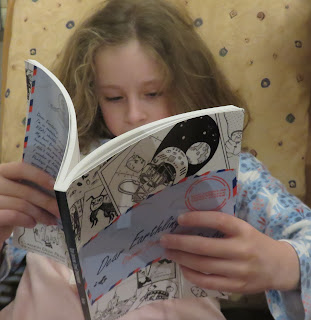 In order to earn his Cosmic Correspondent badge Dethbert begins writing to an Earthling, the book features a series of letters from Dethbert detailing life on Crank and enquiring about life on earth as well as juicy gossip surrounding his love life with Killian and life with his horrid little sister.

The book is aimed at age 8+, there are quite a few made up words and some language features that younger children may not understand. As well as this, only Dethberts letters to the Earthling are printed, it is up to you to think about what the Earthling might have replied and to work out what was in each reply from what Dethbert writes in the next letter in the book. 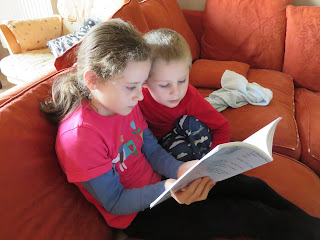 Both girls read above their age and Little 1 happily read the book only asking a few questions about certain words or meanings. Little 2 could read much of it herself but needed some discussion about what might have been in the Earthlings reply each time in order to decipher each letter but she is younger at only just turned 7.

Both girls agreed the book was funny and it even had them chuckling out loud several times.
Little 1 had the chance to interview the author of the book, Pen Avey, so after reaching the end she put pen to paper and asked her burning questions. Here is her interview...

My interview for Pen Avey by Little 1 aged 9.

What made you think of such funny character names? Andi Social made me laugh.

Although Crankians are a peaceful race now, they used fight a lot. Having violent names made them sound scarier to their enemies, and this tradition stuck.

What exactly is a chicken snail?

A chickensnail is literally a chicken crossed with a snail. Dethbert's dad is an  inventor and wanted a chicken with her own hen house, but when his creation lays eggs she crushes most of them with her giant slimy foot. Dethbert wanted to keep the chickensnail (who's now called ‘Precious’) as a pet, and she lives in his garden.

What made you decide not to include reply letters from the Earthling and write the book with just the letters from Dethbert Jones?

There are a lot of similarities between life on Crank and life on Earth but each is a little bit different, I bet you had a good giggle writing this book, what was your favourite bit? My best bit was the part with the hair growth formula.

I had heaps of fun thinking up dishes like ‘Spaghetti Bolognasal’ for the nose themed restaurant!

I loved the ending of the story, it was very unexpected, how do you imagine it all turned out for Albert?

Albert is a sensible creature and I'm sure he brought his home planet back in line.

Do Dethbert and Killian ever become friends?

What are you working on next, any other books in the pipeline?

Keep your eyes peeled for the next installment of Dethbert's adventures!

So there you have it, it is a thumbs up from the girls and in Little 1's words, 'A laugh slipped out a few times when I was reading this book Mummy, you have to read it, it's really funny'.
at 10:23 pm
Email ThisBlogThis!Share to TwitterShare to FacebookShare to Pinterest
Labels: book, review