It was the end of the Christmas holidays, Daddy was back at work and just two days before the Little Ones and I would return to school and pre-school, I was helping Little 3 get dressed that morning and noticed he had spots. I know what this is I thought... chicken pox.


He had around a dozen spots mostly on his back, front and neck, three of which were huge blisters- that was the tell tale sign for me. Suddenly the last few days of his behaviour made perfect sense.

Little 3 had been pretty grumpy and stroppy when he is normally rather easy going and the previous two days he had fallen asleep around 4 o'clock while watching a bit of television on the sofa, having not had afternoon naps for nearly a year. I had thought that his tiredness and grumpiness was due to a couple of late nights over New Year but now I think it was the beginning of the illness.

Over the course of the day new spots were appearing before my eyes and by bedtime around 10 of the mornings spots had turned to blisters and he had around 30 spots, mainly on his head and torso. Over the next three days more spots appeared (most on the afternoon of day 2) all over his body. By the end of day 3 he seemed to be turning a corner, new spots seemed to just come up and dry without blistering and he only got a few new spots on day 4. He ended up with  had around 250 spots altogether.

The itching was at its worst on days two to four when he had lots of blisters and new spots, the days were pretty good but we got very little sleep those nights as the poor soul woke crying every hour, warm, uncomfortable and itchy from being snuggled up in bed on a cold winter night. On the whole it wasn't as bad as I had feared, having been through Chicken Pox with the girls 4 years earlier I knew what to do to help keep him comfortable and to help combat the itching including, this time, a gel I had heard good things about which was blooming marvellous.

So here are our 5 tips to get through the chicken pox itch.. 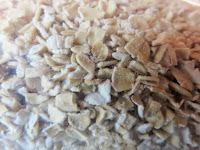 Oat baths - Good plain old porridge oats, they have moisturising, anti-inflammatory and antioxidant properties and also contain a natural compound that soothes and heals the skin as well as helping to reduce itching. Simply fill an old sock or tights with a couple of handfuls of oats and place it under running water or squeeze it to release all the goodness into the bath. Little 3 had a long oaty bath at bedtime each night, it might seem odd soaking the skin when you are wanting the spots to dry up but the spots did look less angry and drier once his skin had fully dried out each night.

Comfy cotton clothes- With huge blisters everywhere and being really itchy Little 3 spent the week in cool comfy cotton clothing, I went for clothes that were soft and loose, without buttons or itchy lining or stitching and picked socks without threads inside. The clothes then didn't irritate his spots and they kept him cool which reduced the itching plus if he did itch the soft clothing didn't do much damage to his healing skin. 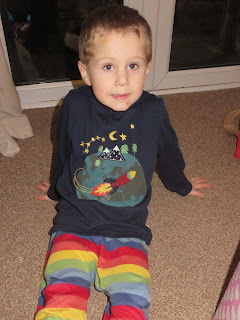 Antihistamine - (or allergy medicines) When the girls had chicken pox 4 years ago we were told to give them antihistamine medicine as this would help reduce the itching and help to stop them scratching their blisters preventing scarring as well as helping them to get a better night's sleep. I used it this time around with Little 3 for three days. I could tell when it was wearing off as he would start to scratch and in the night when he hadn't had it for a while he woke up crying and itching so much until it kicked in and he would settle again, it really helped. 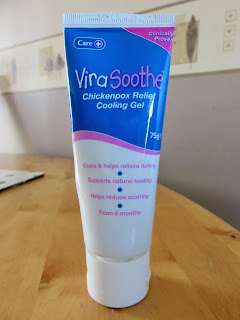 Virasoothe gel- There are some new products on the market these days that were not around when the girls had chicken pox, namely Poxclin and Virasoothe. Poxclin is a cooling moose  and Virasoothe is a cooling gel. I had heard good things about both products, my local pharmacy only had Virasoothe in stock so that is the one I bought, it was quite expensive at nearly £10 but one tube lasted the duration of the illness and it was well worth it. Little 3 let me cover his spots in the gel a few times a day and throughout the night, he said it felt cold on his spots and stopped them itching, a few times he even sighed with relief, the gel seemed to last about 3 hours before I noticed him starting to itch again.

We put the gel on all the spots as soon as they started to appear and I don't know whether it was the gel or not but the spots from day 2 onwards hardly blistered at all and dried out really quickly, it was in fact the first spots from the first day that took the longest to scab over that we hadn't used the gel on until they had already blistered having not bought it until the end of day one. I certainly recommend Virasoothe for soothing chickenpox spots.

Little 3 was back at preschool on the 7th day, all scabbed over after not getting any new spots for three days which was a couple of days quicker than I had anticipated, a couple of weeks later all the scabs are gone and the red marks left behind are fading fast, there are a couple that seem to have scarred but luckily they are on his tummy. I hope if your little one has chicken pox that our tips help you through.
at 2:55 pm
Email ThisBlogThis!Share to TwitterShare to FacebookShare to Pinterest
Labels: little 3, poorly sick