The Little Ones finally get their sought after toy- Fingerlings Monkeys

Little 2 has been on and on about Fingerlings for about a year now, she first spotted them in the run up to Christmas last year but I couldn't find the one she had wanted and has since mentioned them, oh around daily! She loves all the colours and the different animals and was desperate to get her hands on one. 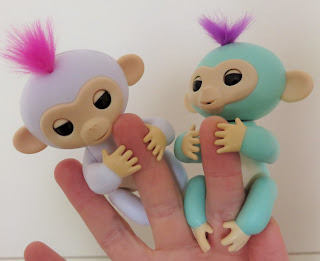 Imagine her delight when all three Little Ones were kindly sent fingerlings to review recently, those monkeys are so cute. Little 3 has taken a particular liking to his and carries him on his finger on the school run and he has to have a nap in my bag while Little 3 is at pre-school (must remember to turn him off each time, there were some funny noises coming from my bag in the staff room once!) Little 3's fingerling, spends the majority of his time on Little 3's finger or tucked up in the folds of his pillowcase where I am not allowed to remove him from as he is precious apparently- kids huh! 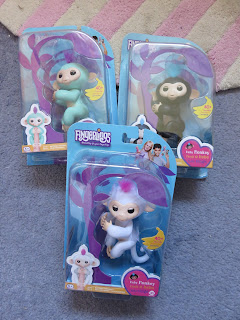 The girls also love their Fingerlings too, we love the way they chatter to us and each other, turn their heads and close their eyes as well as the cute noises they make. Little 1 likes the kissing noises when she kisses hers. 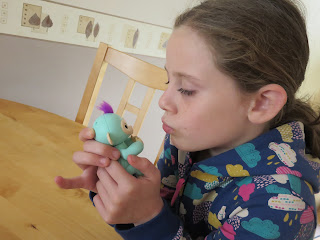 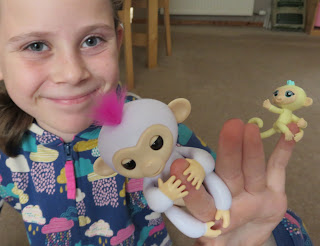 Little 2 likes that she can rock hers to sleep where it closes it's eyes and then begins to snore. Little 3's Fingerling also makes a rude noise which he thinks is hilarious! 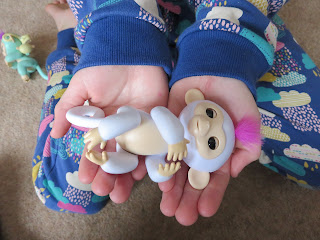 I keep finding these Fingerlings hanging in the most wonderful places, on the arier, drawer handles, edges of things and door handles, they really can sleep anywhere! 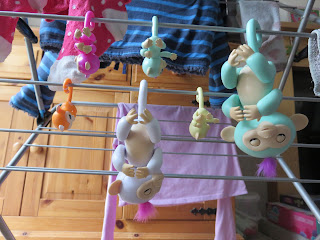 Little 2 likes to put her Fingerling to bed and pretend to feed it while the other two generally prefer to get theirs together and have fun listening to them chatting and kissing, they have certainly kept them entertained over half term. I love the fact that they are pretty indestructible especially in the hands of Little 3 and as a parent think it is great that they have an off switch too. 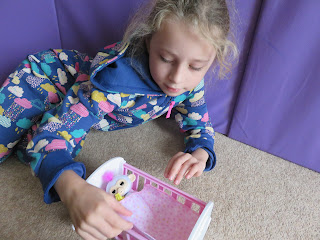 Wow Wee the creator of Fingerlings, the interactive pet, has recently launched the next wave of best friends to play with, not only are their unicorns and untamed dragons (boy, the Little Ones want to get their hands on those!) but the new Fingerlings BFF collection are best friends forever, they come with a mini monkey friend that can hand onto their tail or onto a pencil. There are a variety of colours to collect and are priced at £14.99 RRP. 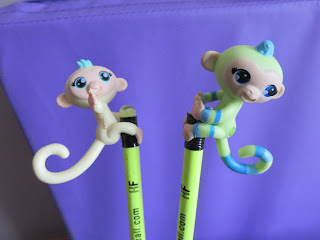 But this is not it, oh no, get ready for more miniture fun as Fingerlings collectibles have recently been released too. I surprised the girls one day after school with these and they were thrilled, at £2.99 they are a great buy (in fact we now have around 8 here as the girls have been spending their pocket money on them). 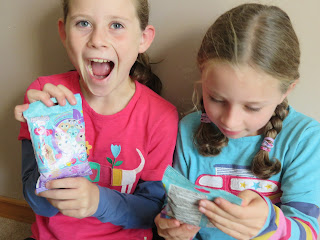 Each little blind bag contains a mini monkey, unicorn or sloth (we have only found monkeys so far) a bracelet and tail charm. They can hang on your bracelet, your larger Fingerling or on your pencil (or your arier like ours do!) 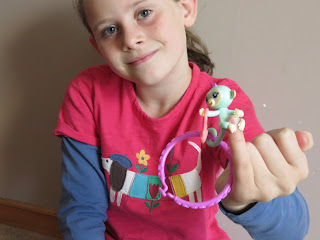 With popular, rare, legendary, and ultra-rare figures to collect, the girls are excited to see what they get each time and are happy to trade if they get something the same. Little 2 has a Fingerlings playset on her Christmas list this year as well as a unicorn Fingerling, while Little 3 fancies an untamed dinosaur one! I wonder whether father Christmas will be able to find those?

at 3:57 pm
Email ThisBlogThis!Share to TwitterShare to FacebookShare to Pinterest
Labels: review, toys