Now that the weather has changed and it is getting a bit chillier out Little 3 has begun to ask almost on a daily basis if it is Winter yet and seems more than a little disappointed each morning when I draw back his bedroom curtains and tell him that, 'No, it has not snowed overnight yet'. 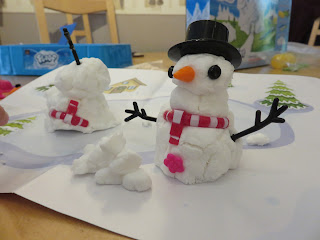 He certainly does make me giggle and when I spotted Floof- the reusable indoor snow at Blog On recently, I thought of him. I knew it would make him smile and that he would love the Mr and Mrs Snowman building kit especially and that the girls would enjoy having a go too as all three Little Ones love this kind of tactile fun. 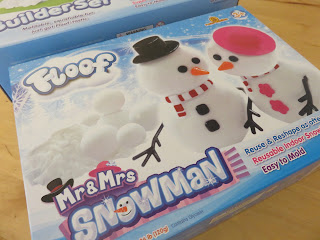 We were kindly sent two Floof kits to review, the builder set and the Mr and Mrs Snowman building kit too. The builder set contains a play tray, 120 grams of Floof, two tools and a roller handle with two roller inserts. 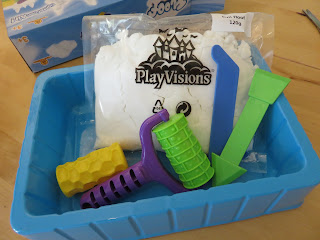 We love a bit of messy play and tactile easy-to-clean things like this are great, the floof is easily contained in the play tray whilst still allowing room for little hands to mould, dig and roll. 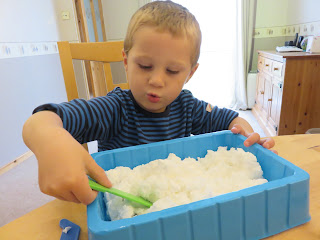 The Floof itself was not like I had expected it was really, really lightweight in fact almost weightless and so soft, it sort of reminded me of marshmallows in texture. The material was fluffy and stuck together in small bits (awesome as Little 3 couldn't flick it everywhere) and was mouldable too, you could squash it and compress it into shapes or you could fluff it up and dig it too, it was different to other things we have tried before. 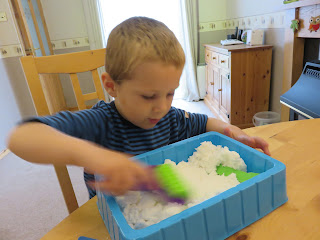 Little 3 had fun playing in the tray and any Floof that did escape was easily picked up. He had been busy playing for ages but I couldn't wait any longer, and had to introduce the Snowman building kit.

This kit also contained 120g Floof as well as a play mat and all the components to create 2 fabulous snowmen, 2 hats,  2 carrot noses and 2 scarves, two pairs of arms, 4 round, 4 square and 4 flower shaped buttons. 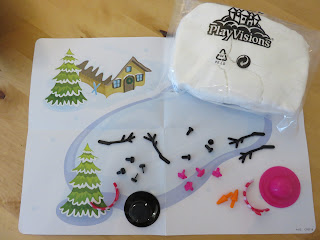 Little 3 and I had fun together making our snowmen, I showed him how to do it and what all the pieces were then he had a go himself and got very creative. He enjoyed deciding which buttons to use and decided the snowmen needed to have a snowball fight so we made lots of little snow balls and attempted to knock their hats off! 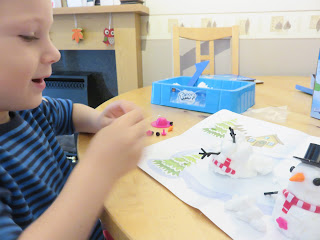 We then had some more fun and made a cat, a dog and a strange caterpillar like creature complete with a top hat, Little 3 then wanted to make proper snowmen again so we did. I think we will have a lot of fun with this kit, it is different material to other tactile kits we have and so soft, we have had it out several times this week already. 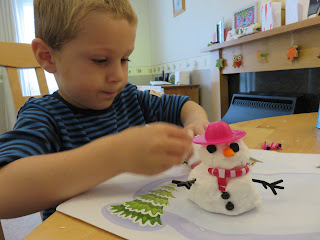 The Floof builder set is available for around £14.99 while the Snowman builder set is priced at £12.99, also available is a small 40g tub, large 240g bucket and a starter set too. Floof is suitable for ages 3 plus and available from Smyths Toys and all good toy retailers.
at 1:30 pm
Email ThisBlogThis!Share to TwitterShare to FacebookShare to Pinterest
Labels: christmas, toy review