I have said before that Little 3 has a love of vehicles, it doesn't really matter what but trains, trucks and fire engines feature particularly highly on his lists when he reels off his favourite toys, not only that but Little 3 loves tactile and messy play and adores helping in the garden and bug spotting too so imagine my delight when he was sent the Play Dirt Monster Truck Rally recently. 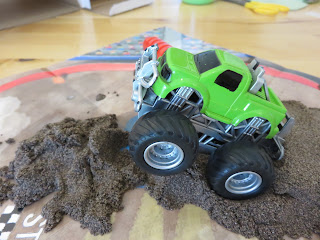 The look of delight on his little face on seeing the box as it not only contained the monster trucks themselves which he didn't actually own any of yet but it also contained dirt, yes good clean dirt that he could play with his monster trucks in, however before you get confused it isn't general soil like dirt it is a play compound from re:creation. 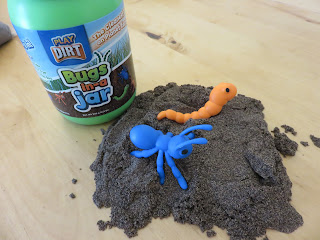 Also in our parcel was 'Bugs in a Jar' we opened this to explore first before letting Little 3 loose on the trucks. Bugs in a jar is exactly what it says and is a sturdy bright plastic tub containing 226g of play dirt and 2 bugs, in our tub we had a blue ant and an orange worm.

Play dirt looks like the real thing with a slightly sandy texture, it feels quite realistic, is easy to mould and really easy to clean up whilst providing the perfect opportunity for that slightly-less-messy messy play indoors or out and as a bonus it is perfectly hygienic too. 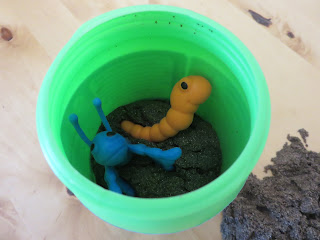 We got stuck into the bugs in a jar, Little 3 and I played at burying the bugs and taking it in turns to find them, leaving bits poking out and trying to determine if it was an ant leg or antenne or a worm head or tail, this did prompt lots of giggles as you can imagine playing with a three year old. We then moved on to hiding the bugs in the jar and counting how long it took to uncover them and dig them out. 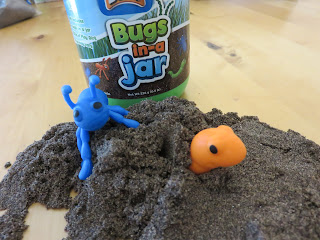 This little set is priced at £7.99 and would make a great little gift or stocking filler this Christmas, being compact it travels well too, we took our jar to a friends house to keep Little 3 occupied one day and he played with it on a table while we chatted then I just scooped it all back up and brushed the floor- mess, what mess! 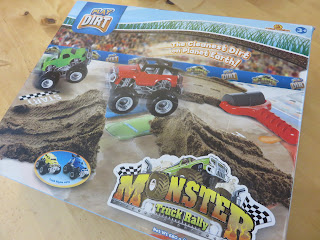 Play Dirt Monster Truck Rally looks awesome from the pictures on the box and Little 3 tore into it with gusto, inside he found 907g of play dirt compound, two monster trucks that are friction powered, a play mat and a road roller. 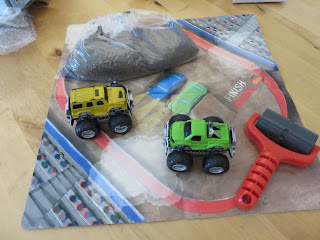 The trucks looked just like real monster trucks with giant tyres and high suspension, give them a push and the friction power moves them across the table, this was going to be fun! 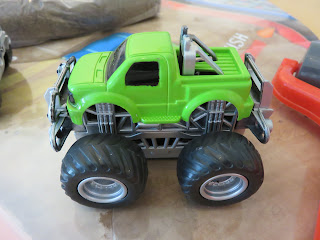 Whilst Little 3 was busy testing out the trucks I had a go at building him a road on the play mat which is themed to look like a monster truck arena, the play dirt was easy to use and compacted well for the trucks to run over aided by an excited three year old, the roller worked well leaving a central reservation on the dirt. 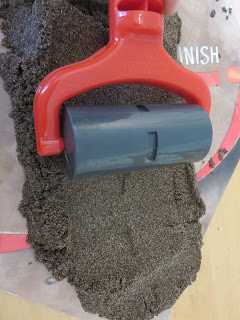 Then it was time for the real fun to begin, we built ourselves a ramp complete with a gap for the trucks to navigate and our Monster truck rally began. I am not sure who was having more fun, him or me! 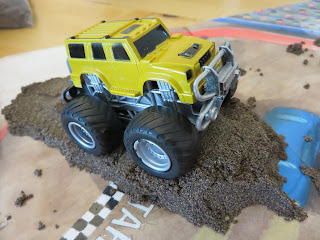 We had such a laugh and made lots of mess on the table attempting to get cars to take off and land on the other side of the mat, but it was no trouble, I just scooped all the dirt back up and the table was clean, what did get on the floor brushed up easily and the dirt didn't clog up the truck wheels or mechanisms either. 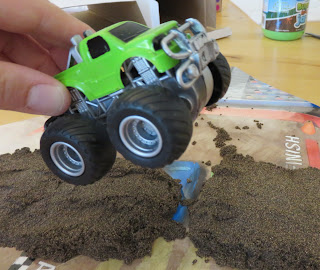