Wouldn't it be awesome if you had a journal that could speak to you, give you the time of day, hints and tips and even help you solve mysteries. Well, McKayla McAlister has just that in the Netflix tv show Project Mc2. Meet A.D.I.S.N the electronic journal which stands for Advanced Digital Intelligence Spy Notebook. 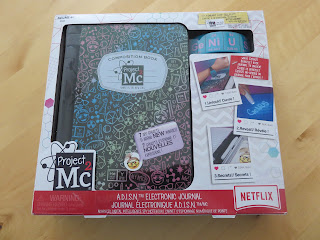 As I told you recently the girls have been watching a tv show called Project Mc2 (pronounced MCsquared) where McKayla McAlister and her friends are recruited by a government agency NOV8 to try and solve mysteries.

The girls were sent some of the toys based on things used in the show, Little 2 reviewed a character doll who came with her own experiment to complete at home and Little 1 has been having a go at being a spy herself with the project Mc2 Spy bag as well as testing out her own version of A.D.I.S.N. 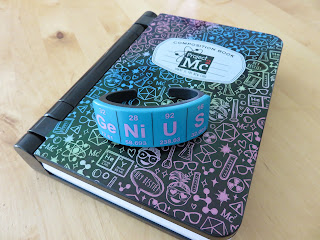 A.D.I.S.N is a hard plastic journal to replicate the one McKayla uses on the show, it comes with a magnetic GeNiUS bracelet to swipe across the front to open it (but don't worry if you lose the bracelet as there is a hidden back up pin switch you can use too).

The journal plays a spoken greetings when it opens and again when it closes as if the personal assistant was speaking to you with 30 seconds of recordings to hear.  Once open the journal has a wipeable page and magic invisible marker, then cleverly hidden in a secret compartment is a UV torch and all you need to do is shine the light on your writing and voila, it appears. Little 1 loves this, she keeps writing secret message for Little 2 to read. 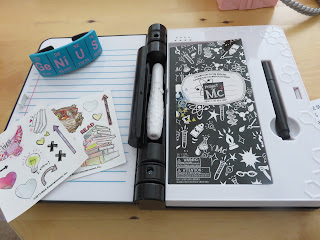 Included as well is a booklet with fun activities, such as a spy code and a couple of mysteries to solve and sticker sheets which little 1 used to decorate the back of her journal. The journal required 3 x AA batteries which were not included.

The journal (under the notebook) has a compartment to fit a smartphone, here the journal comes into itself if you download the Project Mc2 app and put your phone in the compartment then you can use it just like the real A.D.I.S.N, find out and solve more mysteries and chat to Addison using the app. The only thing is the app only works on IOS devices despite it saying smartphone compatible on the box , we don't have any apple devices so we couldn't get the app and therefore the journal had limited use for us. 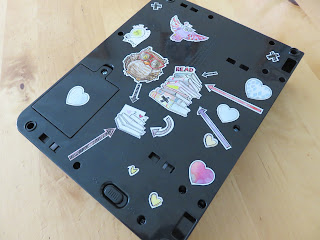 Little 1 still loved the way it opened and that her little brother couldn't get in to it as he didn't have the bracelet as well as writing cryptic hidden messages to her sister, the journal could do with containing a pad of paper like a real notebook as on it's own it does very little but Little 1 remedied that very quickly by filling the smart phone compartment with a few trinkets, a little writing pad and a few pencils. Hopefully an android version of the app will be available soon so she can use it as intended. The journal is widely available around £20.
at 10:13 pm
Email ThisBlogThis!Share to TwitterShare to FacebookShare to Pinterest
Labels: review, toys