Little 3 is one of the gang now

There have been some signs for a while now, that Little 3 was growing up, changing and becoming one of three. It is not now the girls and a baby, a toddler, he has become a proper little boy. An Easter duck hunt at Slimbridge wetlands and wildfowl trust this holidays made me realise just that. 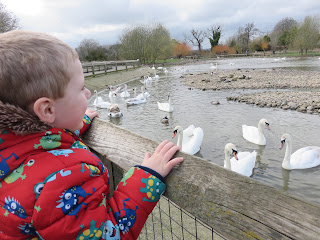 The thought first struck me when we arrived, I hadn't put the pushchair in the car. Little 3 doesn't use the pushchair much these days, it is mostly used to carry the things we take with us, snacks, drinks, coats that have been shed and a change of clothes for Little 3 just in case, although I can't remember the last time we actually needed to use them! But it does come in useful if we are out for a long time and his little legs get tired as he is so heavy to carry these days.

We had visited this time to do Dusty Duck's Easter trail and earn a tasty treat, we have been to Slimbridge so often that we know our way around with our eyes closed, after picking up a leaflet on the way in we headed off to hunt for the giant ducks. Each duck had the name of a bird breed on it and you had to use the birds in the area or on the sign to find the answer, eg 'the greater' was written on the duck in the greater flamingo pen so the answer was flamingo. 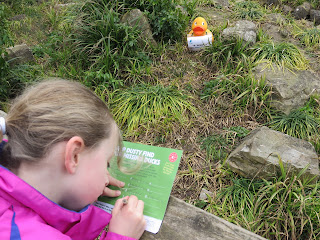 The Little Ones had fun working out the clues and running ahead to spot the next duck, Little 3 kept up with his sisters all the way shouting and pointing when he spotted one. He walked for ages never once asking to be carried. We had walked around most of the wetlands before we ended up at the park looking for the last few remaining ducks. 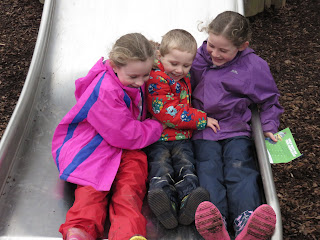 The Little Ones climbed the climbing frame, the girls holding out a hand to help their little brother up and over the top they then all sat at the top of the slide. Little 3 was a bit apprehensive of the drop but he needn't have feared as he had his big sisters beside him. Just look at the smile on his face as they reached the bottom, my three, a team. 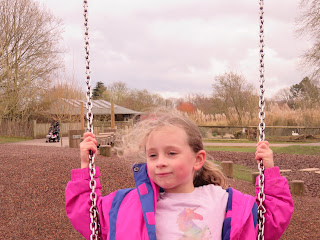 We found all the ducks and all the puddles too, we had gone prepared with wellies and waterproofs after all the rain we had had, the Little Ones as usual not having a care in the world stomping through and thoroughly enjoying themselves with the girls holding their brother's hand when they went through the deepest ones. 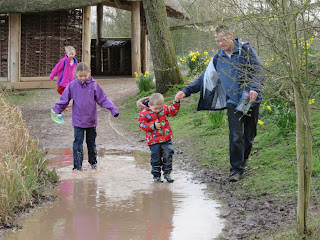 We made our way back to the entrance ready to claim our prize, the girls chatting about the answers with Little 3 running from puddle to puddle happily sploshing around in his watery wellies. We all had a great afternoon that day and it really did make me realise how much Little 3 has suddenly become one of the gang now and that he has grown up so much in the past few months. 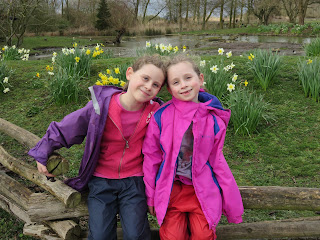 And the pushchair, we wouldn't have needed it anyway, Little 3 walked all the way around right up until the last 5 minutes when he had a carry back to the car.
at 11:24 pm
Email ThisBlogThis!Share to TwitterShare to FacebookShare to Pinterest
Labels: days out, Easter