In desperate need of a Spring garden overhaul

Once upon a time, long before we had children, our garden looked like this, lush and green grass, full of lovely interesting plants. We had a beautiful pond complete with a bog garden containing all sorts of weird and wonderful flowering plants, a trickling stream from the back of the garden and a lovely neat circular gravelled bit in front of the kitchen window. 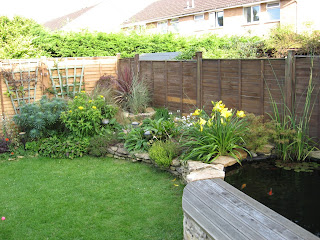 Fast forward another year and we had built a lovely pergola to house a Morello Cherry tree and a Victoria Plum, not long after (but I don't have a photo of that) followed a decking and lovely wooden chair and table set where the green table stands here. 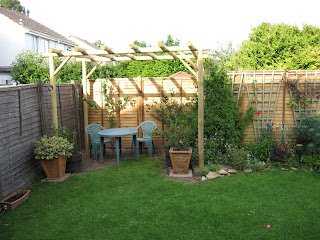 The garden was beautiful, we would sit at the table in the evening sun and watch the shadows over the garden or while away time watching the fish in the pond. Then a few years down the line came Little 1... not much changed except there was less time for gardening. 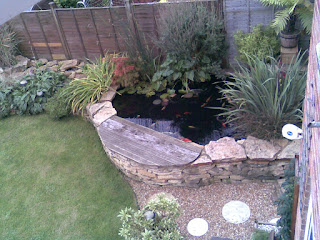 Then Little 2 was on her way, our two bed house needed an extension and so the bog garden had to go to make way for the new lounge doors and was rounded off into a smaller pond. The gap you can see here in this photo is now filled with a lounge, and two more bedrooms. To make way for the trampoline which lived in that concrete spot the stream had to go (it has started leaking on a join by now and needed to be redone) as well as the lush flower border we had, so gone it was, and now the trampoline is in it's place. 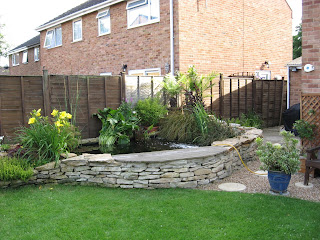 Then came the addition of a climbing frame and slide closely followed by Little 3. The garden is lived in now, there is less time to tend it and with no longer having a garage (having knocked it down in favour of the extension), pots and things are stored under the trampoline so at a glance it is a tad messy (tad being an understatement). The roof of the climbing frame desperately needs replacing and the pergola and decking, after 12 years of British weather had rotted. 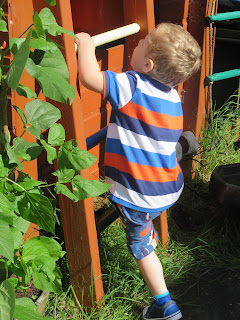 Before the winter we ripped out the pergola and decking in the corner, we are planning to replace it with slabs in the area so we can still use our table and chairs as well as a shed to house the children's bikes and the lawnmower which currently block the side alleyway. We have been looking at pretty paving slab motifs and trying to decide how big the shed needs to be and think we have chosen what we want. 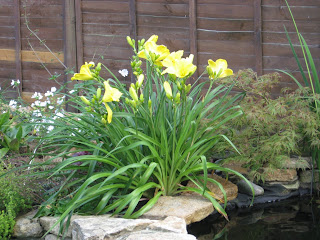 We need to have a really good clear up, the fruit trees are several metres tall now and need lopping, we have quite a few fruit bushes now too, blueberries and cranberries in pots as well as tayberries and strawberries growing along one fence that need tidying and the grass it a bit of a patchy weedy mess from being played on a lot by the Little Ones. Daddy planted a climbing rose over the kitchen window a couple of years back which, in the early Summer is spectacular but is now in need of a desperate cutting back as it is beginning to shoot.


We get a lot of evening sun in the garden and want to make it a place to sit out and enjoy our tea in the warmer weather or enjoy a glass of something by the pond. We have some underwater lighting in the pond which looks great and we had lights in the decking too. Daddy is keen to find some rock lights or small feature lights to put around the garden so we have been keeping an eye on groupon's outdoor-lighting deals to see if anything pops up as we head into Summer.

The recent short spell of sunny weather had all the Little Ones in the garden after school on Friday helping Daddy to do the weeding, it was great fun. Little 3 had his wheelbarrow and was wheeling around the garden collecting bits and pieces while the girls were up to their elbows in mud digging up dandelions. No stint in the garden is complete without a bounce on the trampoline so that is where they ended up in a muddy giggling heap. 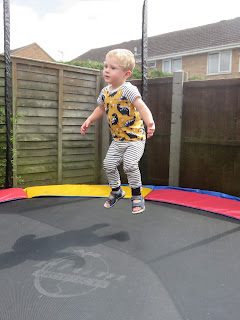 We spend a lot of time in the garden in the drier months, the girls build dens on the trampoline and have tea parties in the playhouse while Little 3 races his cars down the slide. We bought him a pop up football goal for his birthday so it is only a matter of time before the grass looks even worse once he has been out there playing football for hours on end.

We are hoping to have the garden tidy, playhouse roof fixed, the corner paved with a new shed and some fancy lighting in time for the summer, we'd better get to it!!
at 11:01 pm
Email ThisBlogThis!Share to TwitterShare to FacebookShare to Pinterest
Labels: garden