Lately we had a couple of days out when it wasn't raining and recently headed to Dyrham Park near Bath, a National Trust house. We had been there before a couple of years ago but we all wanted to go back and see if we could spot the deer there after they had been elusive last time. 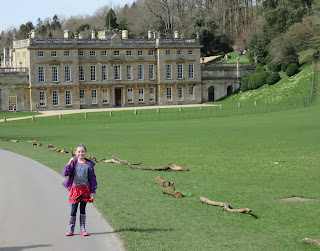 We arrived at lunchtime and had packed a picnic, the car park was very busy being the school holidays but we found a space and a free picnic table, the Little Ones tucking into lunch eagerly. There was a really cold wind on the hill and although we had hoodies and coats on we ate fast as it was rather chilly.

The house is at the end of a very long drive, about a mile long I think, usually you can meander down through the parklands and try to spot the deer but as it had been so wet they asked us all to keep to the drive to protect the parklands. 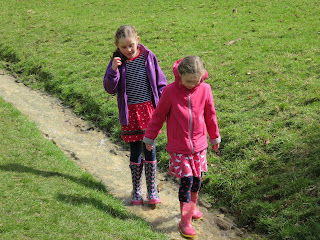 Half way down running along the side of the drive was a man made stream, last time we had been it was just a trickle but that day it was flowing fast with all the water from the hills, the Little Ones happily joined other children walking down the stream in their wellies.

It wasn't long before we were down in the valley out of the wind and with the Spring sun in the sky the Little Ones began to shed their coats and not long after their jackets, guess who ended up carrying them! 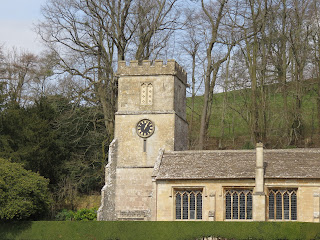 When we reached the courtyard house we signed up for the Easter trail as the Little Ones were keen to earn themselves some yummy chocolate eggs and set off in search of the clues. This year you had to find animals on giant eggs and draw or write their babies in the corresponding coloured eggs on our sheet. 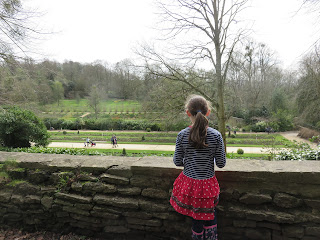 We had fun exploring the gardens running from clue to clue, and drawing little pictures. Little 3 was very much up for being photographed today and kept asking to have his photo taken posing on benches and beside Spring flowers, he does love being the centre of attention. 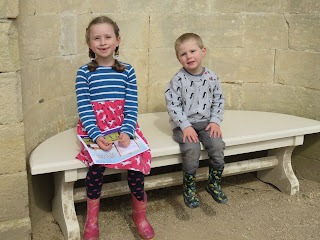 Halfway around the trail we went in and explored the house, we were pleased to find the whole house open this time as the last time we had visited they were doing work so only a few downstairs rooms were open. We wandered round asking the girls what they thought it would be like to wear the old fashioned clothing and bathe in iron baths and even have bells for servants! 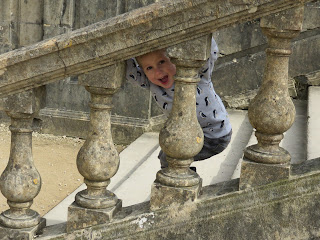 After the house we headed up to the church and terrace for more clue hunting. Little 2 stopped to admire the view and stayed there for absolutely ages, she is such a watcher, she will stay in the same place for a very long time looking and taking in her surroundings deep in thought. We often have to hurry her along as the other two are long gone up ahead and we have to catch up, I hate rushing her along though. 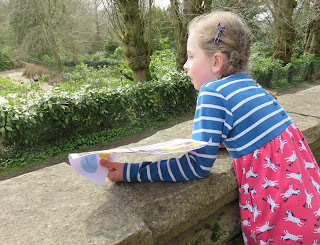 We found a little wooded area filled with wild garlic and some information on recognising wild birds and identifying their calls. Little 1 and I listened a while and could hear two different birds but we couldn't tell what they were. 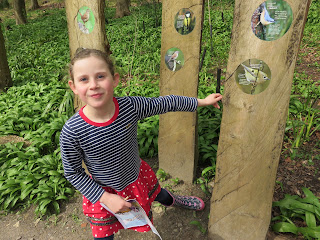 We had soon completed our Easter trail and with all the answers the Little Ones claimed their chocolate prize eagerly. It was time to head home and with a long walk back up the hill (although there is a shuttle bus if you need) we reminded the Little Ones that there was hot chocolate and biscuits back at the car and off they went. 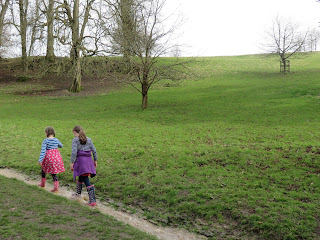 Straight into the stream, they walked back up the hill without a murmur, Little 3 found some sticks and was happy to throw them in the water and watch them floating downstream. We spotted the deer this time, all sat together on a small hill, the largest stag had huge antlers and looked very much in charge of the other deer, they were too far to photograph though. 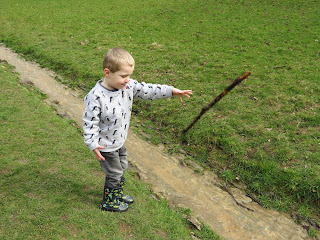 We made it back up to the car and found a picnic table, the flask of hot chocolate went down very well along with some tasty cookies, then we headed home for tea.
at 2:00 pm
Email ThisBlogThis!Share to TwitterShare to FacebookShare to Pinterest
Labels: days out