A doll with a difference, Project MC2 experiment doll

With a talking notebook and a shifty look about her, McKayla McAlister has arrived in Maywood Glen and friends Adrienne, Bryden and Camryn just know there is something up with her and are determined to find out what. 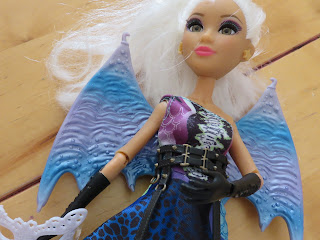 The girls have recently found a new TV show to watch over on Netflix, Project MC² (pronounced MC squared) is set in a fictional city of Maywood Glen, California, and tells the story of McKayla McAlister and her friends who work for a government organisation called NOV8 (pronounced Innovate), a highly secretive group of government operatives who are trying to protect the world. Whilst the girls try and remain undetected at High School, they  work on secret missions using hi tech gadgets and use science experiments to solve clues.

A TV show with a link to the current trend for STEM (science, technology, engineering and maths) for girls whilst still maintaining that predictable Americanised teen TV show only means one thing, my girls love it. They don't watch a lot of TV these days but they have loved seeing these girls performing their experiments, often with simple everyday items and were thrilled when they both got sent a toy from the MC² collection. 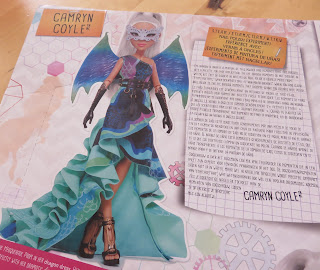 Little 1 got sent the spy bag which I will write about soon and Little 2 was sent her own Camryn Coyle, the engineer with the high IQ, doll dressed up for the masquerade ball just like the character did in the latest series, not only is she a doll but she came with her own science experiment too. 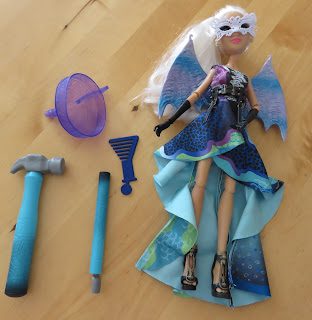 Camryn came dressed in her masquerade dress with removable wings and a mask as well as a comb shaped like a test tube and the equipment to have a go at her science experiment- a mini hammer, spade tool and a funnel. All very intriguing, right?

Let me tell you about the doll first though, Camryn is a lot like other similar dolls in size but there is a difference, this one has fully articulated limbs including the knees, elbows, wrists too which makes her have so much more playability (is that even a word?). Little 2 loves the fact that she can sit as her knees bend as well as pose in many more positions and she is far easier to dress with those bendy elbows (any parent who has struggled to dress one of these things will realise this is a godsend). She also has lovely soft seran hair and even eyelashes too.

We did have a small issue though, that the pegs that hold the legs in at the knees are a bit loose and her lower legs fell out on several occasions but daddy sorted that with a bit of super glue in the peg holes. 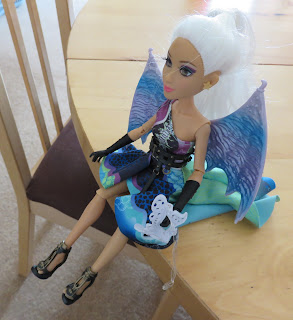 Each MC² doll comes with their own mini science experiment easily doable from materials in the home. Camryn comes with instructions to make your own nail varnish, but there are others such as bath bombe making and pva fairy wings too. 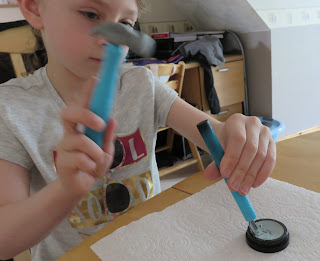 To make your own colour nail varnish you simply get some clear nail polish and an eye shadow, using the tools, the hammer and chisel, tap out the eyeshadow and use the funnel to put it in the bottle of nail varnish (make sure the bottle is only 2/3 full) and then shake, mix and shake some more. The eye shadow dissolves in the nail varnish and colours it. Little 3 thought this was great as her bottle went from clear to blue. 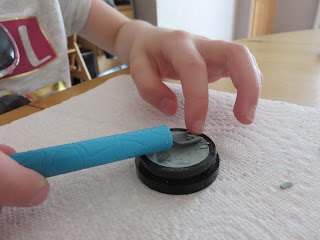 The experiment was fun and the girls are now sporting blue toenails, they want to do it again but with an eyeshadow gone and the cost of a clear nail varnish too, I don't think it is one we will be repeating too often! 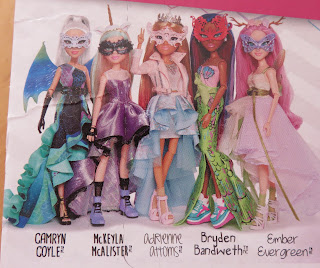 There are several other dolls available in the collection each dressed up for the masquerade ball and with a different experiment, we quite like the idea of the Glitter tattoos or the lemon soap. There are other dolls and MC² merchandise available too on Amazon.
at 11:19 pm
Email ThisBlogThis!Share to TwitterShare to FacebookShare to Pinterest
Labels: review, toys