The Little ones have fun in the snow (again)

When I went to bed on Saturday night I knew there was a possibility of snow on Sunday but I was not expecting to wake up to 4 inches of the stuff, the Little Ones were thrilled to see it had snowed again and it wasn't long before they were outside in it having fun. 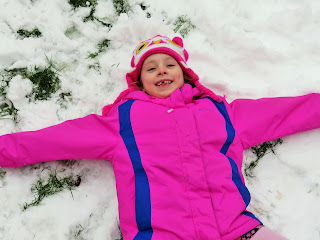 Little 2 had seen a video of bubbles freezing in the snow on the internet and although I told her it was probably somewhere very cold she wanted to give it a try, armed with their bubble wands the Little Ones had some fun blowing bubbles and seeing if they would settle, but they didn't, they had fun trying though. 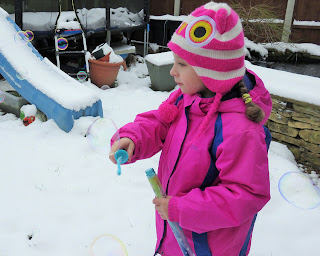 Little 1 enjoyed throwing a few snowballs and knocking the piles of snow off the plant pots before deciding that the slide needed clearing, she cautiously climbed up and then slid down clearing the snow on the way, we all thought it was pretty funny! 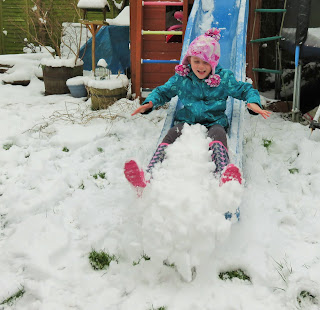 Of course there was plenty of running, jumping and snow angels though no one attempted to make a snowman this time. I think we had had enough of that last time as we did make quite a few that time. 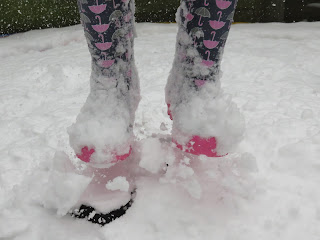 Little 3 had fun throwing the snow around and trying to blow it off the leaves of plants as well as poking finger holes in all the little piles of snow. 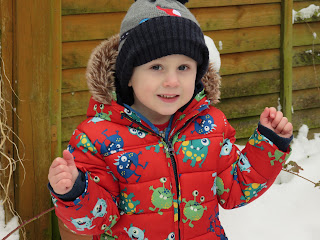 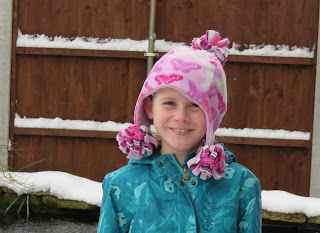 The girls had a bit of a play, doing star jumps and writing their names or drawing pictures in the snow on the decking but it wasn't long before they all tired of it and wanted to come back inside. hey had spent hours in it just a few weeks ago but it really seems like the novelty had worn off. 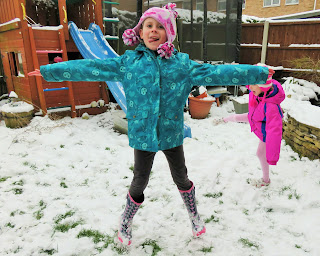 After they has stripped off soggy tight and socks, I made some yummy hot chocolate to warm us all up which went down a treat. The sun has been out today and it has almost all melted, lets hope the snow has all gone now and the Spring can finally arrive.
at 10:09 pm
Email ThisBlogThis!Share to TwitterShare to FacebookShare to Pinterest
Labels: garden