Little 2 has a birthday - 6 years old

Last weekend was a busy one for us, it was Little 2's 6th birthday. It started after school on the Friday with a playdate and a little birthday tea with a couple of her school friends. There was lots of dressing up in a variety of princess dresses and ballerina outfits and all the dolls, teddies and cuddly toys were brought down to share the tea and have a sing along and dance with some of the girls favourite tunes too. 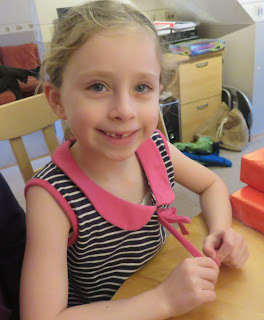 Little 1 had a surprise birthday cake from bakerdays back on her birthday in October and they were kind enough to send Little 2 surprise birthday cake too, this time we had a chocolate flavour letterbox cake in a pink unicorn and flowers design. As always the cake came in a lovely tin with a greeting card, balloons, party blower and two candles, and was utterly delicious, it went down well at the tea party and there wasn't a scrap of cake left after the children had finished with it! 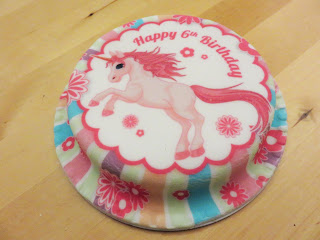 Little 2's actual birthday was on the Sunday, she had been too excited to sleep the night before so had a lie in and was the last of the Little Ones up that morning. We had bought her a brand new purple bike for her birthday which was hidden behind the living room curtains with a helium balloon. The other two kept going near the curtain and I was sure they were going to accidentally discover it or wonder why the curtain was still shut and the light on at 9am!

Eventually she surfaced and after telling us she was so hungry she wanted food before presents we had to wait even longer! At last it was time for gifts and we suggested she open the curtain so we could see better, she was totally surprised and lost for words with a huge grin on her face when she saw her bike complete with a purple doll carrier on the front. 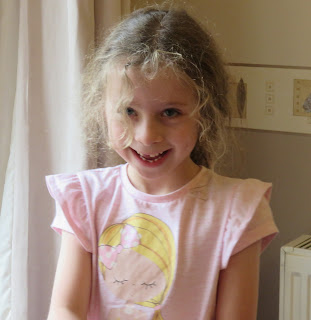 After opening her presents we had visitors, Nanny and Uncle M popped by with more gifts and some yummy coffee time treats too. We had a bit of quiet time around lunchtime while Little 2 played with some of her new things and then Granny and Grampy popped in with our cousins and we all went for a scoot/walk/bike ride down to the park. 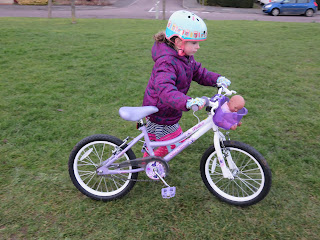 Little 2 got the hang of her new bike really quickly even though it is slightly too big for her at the moment and while the girls rode on ahead Little 3 kept up with them on his scooter, his little legs going as fast as they could.

It wasn't long before the sun went down and we started to feel a little chilly so we headed back for birthday cake. Little 2 had asked me for a swimming cake and with the help of Little 1 the night before I don't think I did too badly, the birthday girl was pleased. 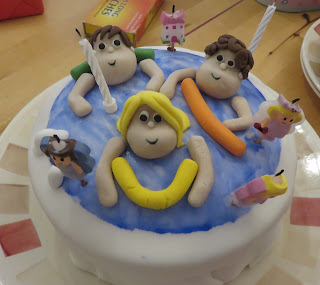 One very tired little girl had a super birthday and some lovely gifts, she also lost her third tooth too and had a visit from the tooth fairy that night as well.

At age six Little 2 loves-
Dresses and dressing up
Crafts and colouring
Swimming
Riding her bike
and her favourite food is still Spaghetti bolognaise
at 10:27 pm
Email ThisBlogThis!Share to TwitterShare to FacebookShare to Pinterest
Labels: bikes, birthday