A boy and his love of scootin'

At nearly three years old Little 3 wants to walk to school and nursery much of the time now but equally he has days where he just wants to be carried and not walk at all, particularly after his mornings at nursery, it is heavy going lugging a toddler and his rucksack or a gym kit and three lunchboxes (and even a cardboard space rocket today!) home from school. Some days, particularly wet and chilly ones, I still take the pushchair to give my back and arms a rest and others he is happy to take his favourite method of transport.... scooting. 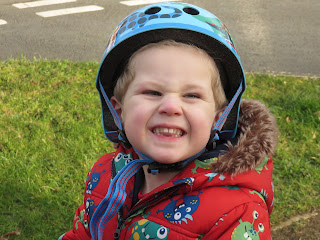 Little 3 had his scooter for his second birthday and a brand new fancy helmet last christmas and now he has had plenty of practice, can stop and start safely and balance, I have begun to let him scoot on the school run knowing he will not mow down too many other children on the way! 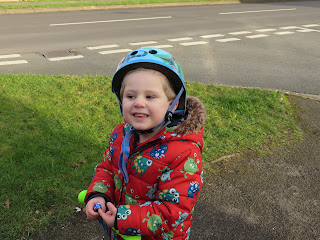 He really does love his scooter and asks to ride it most days, I love watching him, he glides along rather speedily for a few metres with the back of his scooting leg up high in the air after each stride and then suddenly stops himself with his foot and lifts up the front of the scooter to change direction. I have been teaching him to move the handlebars left and right to steer but he tends to lean too and starts to topple, a bit more practice is needed! 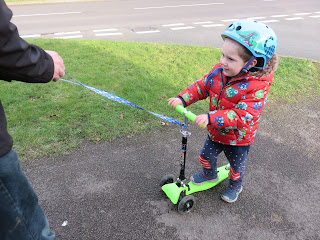 Like most two year olds he gets tired legs and can only scoot so far usually to school and part way home again or to the park but not back after playing. He will happily stand on his scooter and be pushed home but that is really a killer on my back stooping and pushing him on his low handle bars so I invested just a few pounds in a scooter strap. It has been a saviour, now I can just pull him along using his strap and my back is saved! It is also useful to hold on to when he is scooting to prevent him rolling onto the road. 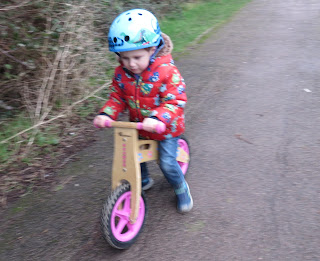 As well as scooting Little 3 has recently grown tall enough to ride Little 2's old balance bike, it may have pink wheels and flowers on it but he hasn't noticed nor cares and he does make me laugh while he tries to ride it. 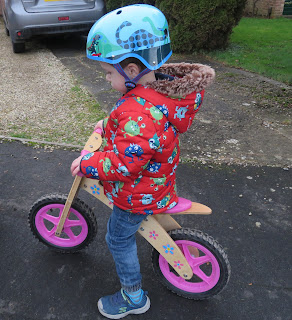 At the moment he tends to walk with it rather than sit on the seat and then after a while finds that a bit of a pain and gets off to walk or asks to be pushed. I remember Little 2 doing the exact same thing for a month or so after she had it. Once she got the hang of it she was off though and transitioned straight to a bike with ease unlike her bigger sister who hadn't had a balance bike and took a while to learn her balance on her proper bike. I don't think it will be long before he cracks it and then I will be running to keep up!
at 11:24 pm
Email ThisBlogThis!Share to TwitterShare to FacebookShare to Pinterest
Labels: bikes, little 3, out and about