The Little Ones get crafty with Pottery Cool

Anyone who knows my girls knows that they love crafting, they are always cutting, sticking and hoarding loo roll tubes for their next project and at every opportunity they will have the paint out and be eyeing up the glitter. 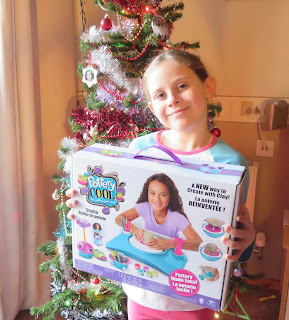 This Christmas they were lucky enough to receive several lovely craft kits as gifts including this Pottery Cool Studio from Spinmaster UK. Inside the kit was everything they needed to have a go on a real (toy) potter's wheel and make their own clay creations. 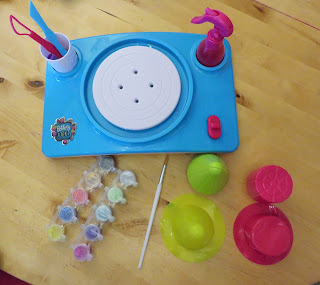 Inside the kit comes a potter's wheel with two speed settings, 4 clay disks, a bowl shaped mould and liner and a cone shaped one too as well as sculpting tools, coring tools, a spray bottle, 10 metallic paints, a paint brush and instructions showing how to create a jewellery holder, a speaker cone and several other things with the clay included, all you need a 4 x size 'C' batteries for the wheel which aren't included in the kit.

What I liked was that lots of clay comes with this kit, 4 ready rolled and individually wrapped disks so both girls were able to make a pot and we have some left for them to have another go another day too. 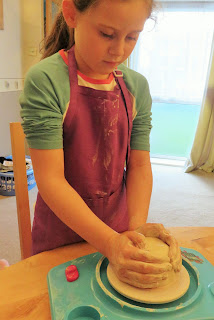 All you need to do is put a mould on the turntable and place a clay disk on top then after wetting with the water spray gently mould it into your chosen design using one of the two speeds available on the turntable.

Both girls loved this bit and were quite liberal with the water, they had plenty of fun and there was lots of squealing as their projects took shape. Little 1 made a bowl and Little 2 used the cone shape mould to create what she called a bracelet holder. 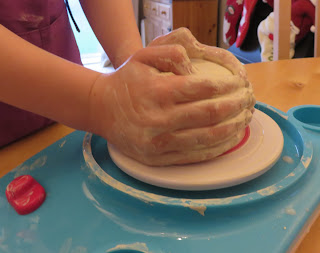 The clay was easy to work and the turntable worked well, Little 1 used some of the tools to make grooves and patterns in her bowl.  The clay included is much better quality than what we have had in other air drying kits before and came away from the moulds without cracking after being left to begin to dry for half an hour but I did find that wetting the insert slightly helped. 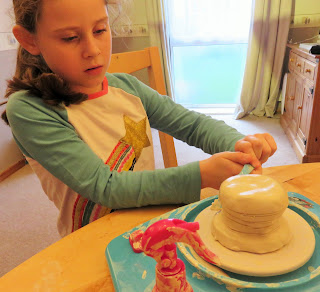 Both girls pots took a couple of days to dry enough to be painted but they had used rather a lot of water when creating them. The clean up was quick too, the clay washed easily out of their clothes and aprons, wiped off the table and rinsed off the wheel and tools, so it got a thumbs up from me on that front. 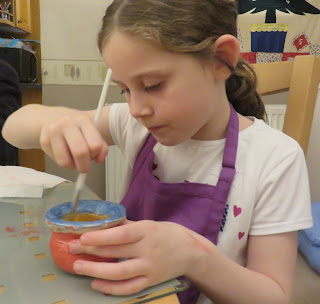 The girls were pretty pleased with their creations and as soon as the paint had dried they disappeared to put them in their bedrooms.

Pottery Cool Studio is available for around £30 on Amazon and a refill kit priced around £10.

N.B We were gifted this product for this post however all opinions are our own honest thoughts.
at 8:16 pm
Email ThisBlogThis!Share to TwitterShare to FacebookShare to Pinterest
Labels: review, toys