There is no denying it now Christmas is not far away, the Little Ones are coming home from school singing songs for the school play, the Christmas dvd's are out and I still need a few gifts for quite a few people. If you are like me, with three children, Christmas is on a budget and I find it is getting harder and harder each year to buy gifts for others that don't break the bank and don't look like hardly anything either.


Sportsdirect.com recently got in touch and asked us to take their #sdfiverchallenge, they asked us to chose and give our thoughts on their Christmas gifts for a fiver, now £5 doesn't get you much these days and so I was intrigued when they said there was something for everyone, after all Sportsdirect was certainly not a shop I would have gone to to find gifts, I thought all they sold was sports stuff.

Challenge accepted, we headed over to the Christmas gift section of the site, what I found really surprised me, there was indeed something for everyone and all at really affordable prices, so what did we get for a fiver or less and what did we think?

I was surprised to find a whole lot of children's gifts there and so I started looking for a few bits for the Little Ones.

First up I chose this set of bath puzzles for Little 3, he loves Disney Cars and he also loves bathtime too, he would stay in the for ages if you let him. These puzzles are perfect for him at 2 and a half years old. The set comes with 11 pieces that make 4 puzzles of the Cars characters, two 2 pieces, a 3 and a 4 piece. They are made of foam that floats and sticks on the side of the bath when wet, I know he will just love them and at £5, not a bad price either.

Next up was a purchase intended for Little 2, a set of 6 plaster figures of fairies and unicorns that comes with paints and a brush all at the bargain price of £4.90 in the sale, you can't go wrong for that. On arrival the set was a little smaller than I had envisaged, the figures are only around 2.5-3 inches tall, I think that they will be too small for her to paint well being only 5 years old so I am planning to give the set to an 8 year old neice instead now as she will be able to paint them a little better.

This little gem was a welcome find, you see Little 1 was given the same thing for her birthday by a friend last year and has her painted Elsa in her bedroom, Little 2 has been after one ever since but I had only seen them for around £7-8. On Sportsdirect it was only £3.00, that's it! Little 1 will be giving this to her sister for Christmas and I know she will be pleased. 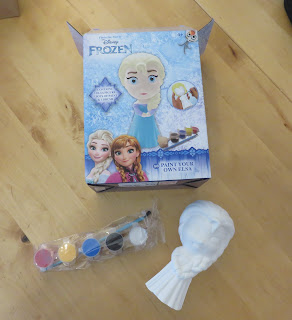 I did then have a look at the gifts under £10 and was really pleased to find a couple of things to add to the growing list of finds in my shopping basket. I spotted this Sands Alive Finding Dory set and immediately thought of Little 3. I love the Sands Alive stuff, the sand can be moulded and yet it flows through your hands like water as it disintegrates and it is so soft. Last Christmas we bought Little 2 a disney princess castle set and she loves it but it doesn't have a lot of sand in the set and she won't let anyone else play with it, especially her little brother, so at the bargain price of £7.50 this set went in my basket for him.


Last up was probably my best find of all, I really am super thrilled with it. All three of the Little ones love playdough, Little 3 loves to squash it, mash it and eat it! and the girls love to make little scenes or pretend food with it, we often spend a wet afternoon playing with the stuff. I came across this Playdough town pet shop set at the crazy price of just £7.50 and couldn't resist it at that price, I was thinking of maybe Little 2 or 3 but hadn't quite decided. 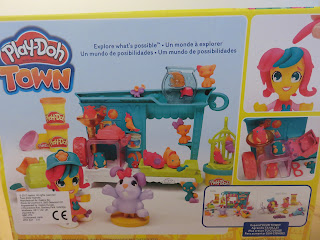 Once it arrived and I had a sneaky look inside I was even more impressed. Inside is a shop front with a clip on section, a till piece, a hamster wheel, a fish bowl, bird cage, a basket, a rabbit and a girl figure as well as 4 different colours of playdough (2 small tubs and 2 mini tubs) and the whole set is filled with little moulds everywhere of animals and accessories. 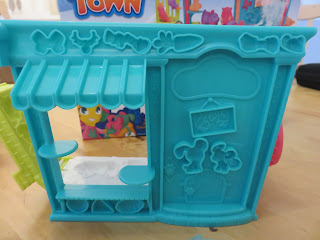 On the back of the shop is a mould for a dog and mouse, a sign and some animal food, on the front there is one for a cat and rabbit, some glasses, and a hamster who could go in the wheel among other things. 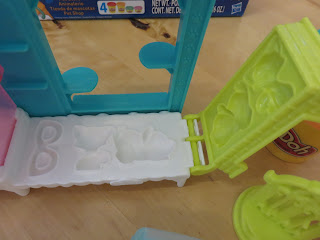 There is a fish mould in the fish bowl and space where the pets you create can sit, birds can hang on a peg in the bird cage. The rabbit  figure has no ears but holes if you pop some playdough in him and put him on the stand, hey presto you get ears popping out as long as you like. The same goes for the girl, there are spaces in her shoes and if you push her on playdough you get laces, likewise for her hair, there are even moulds in her clothes for a bunny logo or a paw print. 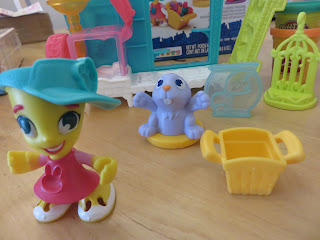 I like the till too, there is a mould for a coin and a note, a brush and a bag of food too. The till comes off and if you fill it with playdough when you push it back down it looks like a receipt coming out. This set has such a lot in it and has the scope for a whole afternoon of imaginative play, you can create lots and lots of pets using the moulds and get quite a game going with this set, if you added another pot or three of playdough then you really have an inexpensive fab Christmas gift. I have decided to give it to Little 2 as I think she would get the most play value out of it, her brother will play with it too of course though. 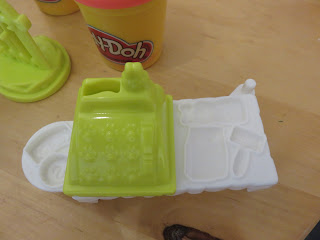 All these things in my shopping basket came to the grand total of £27 (plus delivery of £4.99), now for 5 Christmas presents, two of which are normally around £15 each anyway, I thought this was brilliant. I certainly didn't expect to find things like this at Sportsdirect.com.

This post is an entry for BritMums #sdfiverchallenge Christmas Challenge, sponsored by Sportsdirect.com. We received a voucher towards the goods mentioned above.
at 12:31 pm
Email ThisBlogThis!Share to TwitterShare to FacebookShare to Pinterest
Labels: christmas