I remember years ago sitting with my dad, all sorts of nuts, bolts and metal bits around us having a go at building some of his ancient Meccano. I can't remember what it was or what we did with it but I enjoyed twisting all those nuts and bolts into all sorts of things.

This week Little 1 and Daddy have been busy building Meccano too, the 25 in 1 off-road racer set from Spinmaster to be precise and I am not sure who liked the kit the most. 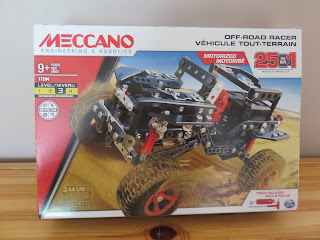 Meccano was created in 1898 by Frank Hornby, that makes the toy over 100 years old! Initially created to keep those creative minds busy with cool construction it has been given a boost into the 21st century with a fresh focus on the, all the rage in education, STEM curriculum (Stem stands for Science, Technology, Engineering and Maths). You can find out how meccano fits into the STEM curriculum here.

This impressive kit comes with all the parts (406 of them), building tools and a motor to make not only one but 25 different vehicles (one at a time) and anything else you fancy building too! Cool huh. The instructions included in the box contain the information required to make three of the vehicles and the rest of the instructions can be downloaded online. 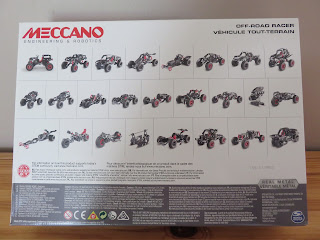 Little 1 and Daddy chose which car they wanted to make first and got stuck in, the instructions are clearly labelled and laid out in colour which is a big help as there are some rather small bits in the kit. One handy thing was the actual size picture of a hand and screw (see below) so you could check you had the right size bolt in each part, great for Little 1 who wasn't sure which was the right bolt to use at times!! There were 54 steps for the car they chose and they were relatively easy to follow. 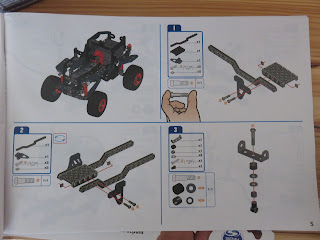 One of the things that I noticed was that some of the parts are metal in the kit (like the old kits I remember), the straight pieces and the nuts and bolts like you expect with Meccano and there are some plastic bits too. The plastic pieces tend to be the angled or odd shaped pieces as well as wheels and lights and bits too, they are in a cool charcoal colour and are strong and flexible at the same time. Having had Meccano as a child Daddy said they are a great addition to what he remembers Meccano to be like as they make the build more realistic and you can create fun different things too. 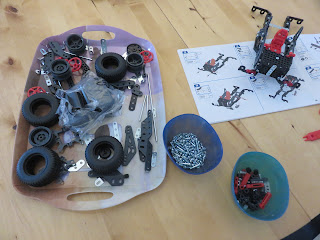 Daddy and Little 1 (and her friend) started building after school one day, it took the children an hour to get to the stage shown above by themselves with a little help from Daddy before they began to get bored. Each piece has a really quite small nut and bolt that needs to be tightened with the tools to ensure it stays in place and this can get quite fiddly.

The kit is aged at 9 plus (Little 1 is almost 8 years old) and stated as level 3 out of 4 and an intermediate kit in terms of difficulty. She was able to select the right parts and follow the instructions but did get bored after an hour of building having hoped she could build it much quicker and went off to do something else. The kit is definitely not something you can build quickly, Daddy carried on building and it took him 3 hours to build the whole car (the instruction suggest this particular vehicle takes around 4 hours which is fairly accurate). 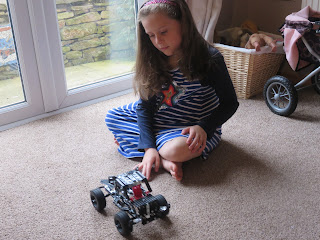 This kit is great for older boys and girls and young teens who want to do some building but have the patience to spend an afternoon building or to build in small doses, and also have the dexterity for the small nuts and bolts, which need tightening often as you build. I love that there is such a variety from just one kit too, well worth the money. This kit retails around £35 on Amazon and would make a great gift for anyone who likes building, taking things apart or vehicles and having the motor included in the kit makes for that extra element of fun. 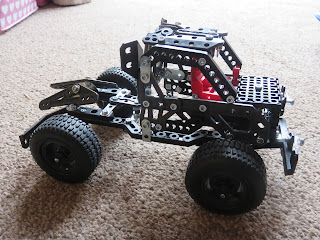 After building the first car which didn't have a motor, Daddy decided he wanted to build another with the motor and so took it all apart after a few days which took him nearly half an hour!! A few evenings later he had built another with the motor, we found that the motor was easy to fit but lining up all the bits and cogs so that it could actually move was quite tricky.

If you are looking for a challenge, for an older kid or even Daddy, then this kit is great but a bit too tricky for Little 1 at the moment (although she is younger than the recommended age) but with all sorts of kits and difficulty levels there is plenty of Meccano out there to suit everyone... I think we need to try a starter kit!

N.B We were gifted this kit for the purpose of review, however all opinions are our own.
at 1:09 pm
Email ThisBlogThis!Share to TwitterShare to FacebookShare to Pinterest
Labels: review, toys