What do you do with your children's artwork? Stationary Bundle Giveaway

It is 3.25pm and we have just got in the door from school, while the children raid the kitchen for a snack and tell me about their day I sort out their book bags, I find letters, reading books and diaries, homework and pieces of art. 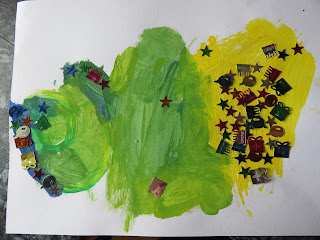 Pieces of artwork, so much artwork, a little letter Little 2 has written showing me how neat her writing has become, a half coloured picture from a wet break time, a picture she has lovingly cut and stuck for me and from Little 1's bag, a birthday list complete with tiny pictures that make me smile as I look at them and a colouring she wanted to finish at home. Along with the pictures and paintings the Little 3 brings home from nursery, there is so much, too much to keep but what to do with it all? 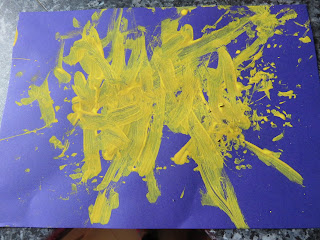 A new study undertaken recently by stationary company BIC has revealed a guilty secret of parents across London. Research showed that 64% of parents admitted binning their children's artwork due to the sheer volume of it all and that 47% of them have been rumbled by their children while doing it. A further 17% admitted palming off their child's handiwork to grandparents or friends in an effort to clear some space! BIC's research study also showed that parents have a lot of pride in their children's artwork and an overwhelming 92% proudly displayed their children 's artwork in the home, the majority of whom (80%) did so on the fridge door or other spot  in the kitchen. 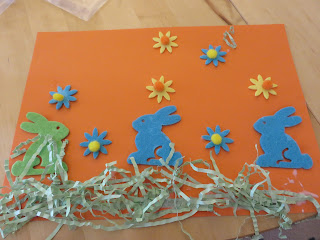 The research study was undertaken just before BIC announced the winners of it's summer long 'Young Artist award' drawing competition with the ten winning pictures being revealed on 100 bill boards across the country. The study showed that of the 92% that displayed their children's artwork two thirds did so because they feel it is important for boosting their child's confidence and creativity. 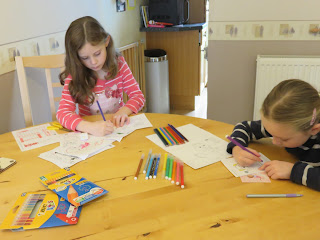 So what do we do?? Well , I have to admit that I am one of those parents that gets rid of the majority of the stuff that they bring home, but before you call me names, let me explain the way I go about it, in order to protect the Little Ones feelings! First off anything lovely and decent or something they have handed to me in person with pride is kept, and put on the board in the kitchen or on the mantlepiece. The other random stuff from their bags is put in 'the pile' on the sideboard.

'The pile' is constantly growing in volume and needs to be thinned at regular intervals, Sometimes the girls will carry on a colouring or letter from the pile which then gets put back on the top, now and again I will take a few bits from the bottom and secrete them into the recycling bin while the girls are either at school or asleep, I got caught once and they were not happy so I never do it while they are home, usually by then that piece of art has been forgotten about and they are none the wiser- mummy win! 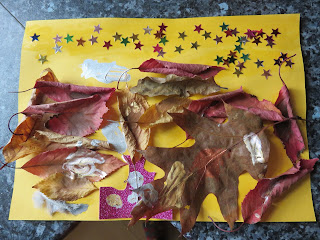 The same goes for anything that has been on display, once replaced by something new it too is added to 'the pile'. However, I am not entirely horrid and do not throw everything- both girls have a 'keepy-box' in their bedroom where they keep things like birthday cards from friends, letters or special postcards, photos etc, quite a few bits of artwork end up in there, first stick figures, a lovingly drawn picture, those first bits of wiggly writing etc but even those boxes are getting full so we came up with the idea of taking photos.

Both girls have a camera and so when it is time to throw some things away they happily take a photo of it on their camera before it is binned and I now have a file for each of them on the computer with pictures of their special artwork. I thought this would fall by the wayside and get forgotten but they do actually go on and look at the pictures now and again.

So what do you do with all your children's artwork?? Are you hitting the recycling bin after dark like me or can you just about open the fridge without losing an eye due to all that paper??

Now the lovely people at BIC have given me a fantastic £30+ bundle of stationary goodies to giveaway, to help your Little Ones on the way to creating those wonderful masterpieces that we pride so much. So if you want to be in with a chance of winning these goodies then enter on the rafflecopter below.

a Rafflecopter giveaway
at 11:08 am
Email ThisBlogThis!Share to TwitterShare to FacebookShare to Pinterest
Labels: giveaway