The one with all the fossil hunting in Charmouth

An email landed in my inbox this morning reminding me that we go away in just 3 weeks for half term and I suddenly remembered I hadn't yet written about our lovely summer holiday we had this year. 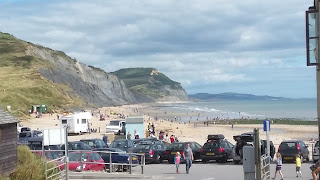 We had a fantastic family holiday down on the Dorset coast where we stayed in a caravan just a few hundred yards from the beach. The Little Ones had plenty of fun on the beaches, playing with new friends in the next caravan, eating fish and chips and we had a couple of days out too. A simple fun family holiday but as Little 1 said 'The best holiday in ages, Thanks Mum'.

For the last few years we have gone away with family or friends but this year we decided to go away on our own, the first time since Little 3 was born! I knew that as long as we went somewhere with a beach the Little Ones would be happy. Daddy and I like to head south and decided to visit the Dorset coast as it has been years since I visited on family holidays when I was a child having lived not far away in Devon. 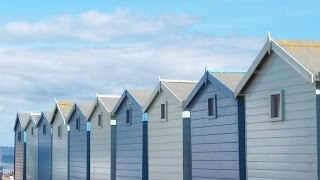 We settled on a lovely little quiet caravan park right near the beach (it was literally 400 yards away) in Charmouth as we thought the Little Ones would be interested in searching for fossils on the famous Jurassic coastline.


We had a really lucky week of dry weather and settled into a bit of a routine, breakfast and getting ready for the day while the Little Ones played hide and seek around the caravans with a friend they had made or football in the field, then on went the sun suits and off we went to the beach. There was a bit of a wind on the incoming tide so the children tended to get cold quite quickly once they were wet so it was back to the caravan for a hot shower and lunch before heading off somewhere for the afternoon, often back to another beach. 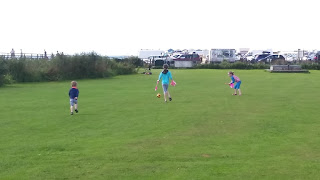 Depending what we fancied doing, there was a trip to Sidmouth beach and the Donkey Sanctuary there, a visit to Lyme Regis, West Bay and a few little villages nearby. There was a day trip into Weymouth to visit the National Sealife Centre there and a trip to a miniature steam railway too, we packed a lot into our week away. 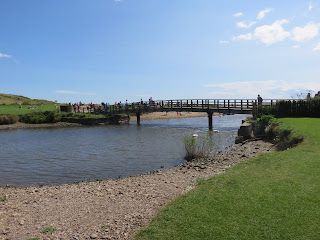 Charmouth itself was lovely, the river Char ran alongside the caravan park and out into the sea, to get to the beach we just walked down from the caravan along a grassy bit and there we were. We went for a walk up along the cliffs one evening and took in the beautiful views into the distance of Charmouth and further along the coast, Lyme Regis.

Charmouth is famous for fossils, there is a museum there which the Little Ones liked looking around and had a go at pretending to uncover a dinosaur skeleton and in the fossil shop below there are hundreds of rocks, polished stones and trinkets. It was in there that you can hire a hammer and goggles to take onto the beach and see if you can find your own fossils. 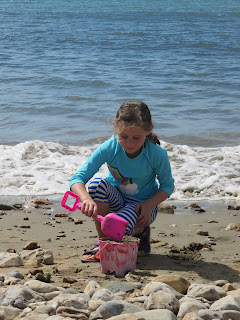 One early morning we did just that as you could keep the hammer for the whole day. Little 2 was first at having a go, it was good fun choosing your rock and giving it a good whack then looking to see if anything was to be found. We found a whole lot of rocks that split to find a sparkly, glittery layer inside but no luck on the fossil front. 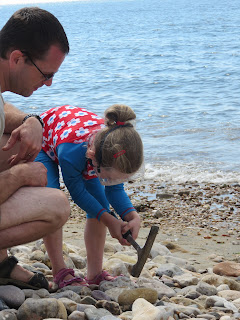 Later that afternoon we went to the other side of the beach as the tide had gone out where we found much bigger rocks, these were great. When I had a go I found even the biggest of hits only chipped a bit off the side so you had to keep going chipping away at the rock or selecting a little one that you thought might be fruitful and searching for the two halves as they shot off when you hit them (it was all rather therapeutic hitting rocks with a hammer!). 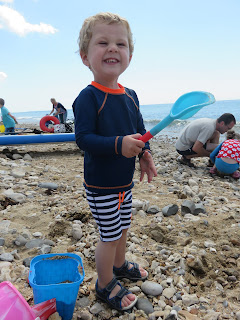 It was Little 1 in the end who had all the fossil finding luck, we had all found bits of glittery rock and odd marks and shapes in stones but Little 1 found no less than 4 ammonites just minutes before the fossil shop was due to close and we had to get the hammer back before it did to get the deposit back. She was so pleased and shared them with her sister. 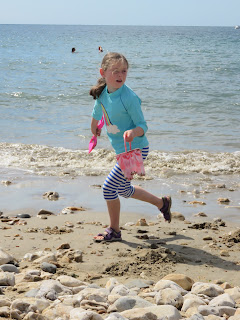 The best part about the holiday this year was that Little 3 was that little bit older and it made a world of difference, no nappies or long nap times to negotiate, he was quite happy with a ten minute snooze in the car on the way somewhere. He was so grown up and sensible too, there was plenty of grass around the caravan and hardly any cars in the park so we let him play outside with his sisters. He just loved running around chasing them, playing with his trucks and trying to do cartwheels. Little 1 kept a big sisterly eye on him and we watched from the caravan as he played happily in the sun. It was great to see them together having fun while Daddy and I enjoyed a coffee and actually got to chat to each other for once. 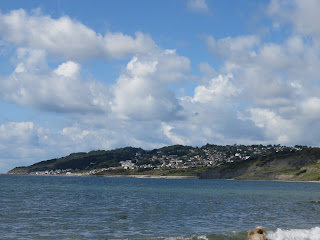 We are going on holiday again in a couple of weeks, to Wales, I promise to write about it before it becomes a distant memory this time.

at 9:44 pm
Email ThisBlogThis!Share to TwitterShare to FacebookShare to Pinterest
Labels: beach, holidays, little ones