#PrezzoLaFamiglia- A giant bowl of pasta- don't mind if we do!

We were recently invited by Britmums and Prezzo to take part in their #PrezzoLaFamiglia Challenge. The challenge was to try out the NEW Prezzo LaFamiglia pasta sharing dish as a family and share our thoughts. Well, with pasta being the favourite meal of three members of our family and the thoughts of a giant bowl of pasta that I didn't have to cook, we were totally up for it. 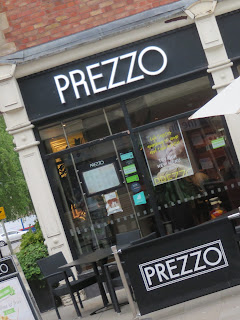 We booked ourselves (as well as Nanny and Uncle M) into the Gloucester city centre branch one Friday evening and were warmly greeted by the hostess who offered us a choice of where to sit, menus and colouring for the Little Ones. 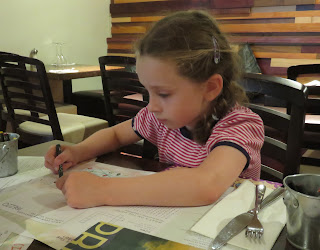 We were there to try out the new #LaFamiglia sharing pasta bowl, a giant bowl of pasta for two adults and two children in a choice of 4 dishes, Penne Arrabiata, Spaghetti Bolognaise, Spaghetti Carbonara or Penne Alla Rusticana. We chose the latter which was chicken and peppers in a smooth pomodoro sauce. As part of our meal we are also provided with two large garlic breads and the hostess kindly offered us two side dishes as well where we chose a side salad and fries. 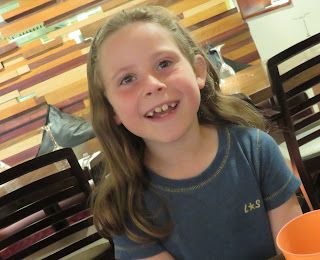 We also let Little 1 order a kids pizza as she had had pasta that day for school dinner and didn't really fancy it again, Nanny and Uncle M chose a crab salad and a calzone for them too. The hostess brought us plastic cups and straws for the Little Ones drinks and switched their adult sized cutlery for smaller versions too, great to see a restaurant so geared up for children.

With the food ordered we waited around 20 minutes for it to arrive, Little 3 began to get restless as by now it was well past his usual tea time and he was getting tired. The hostess popped up behind us with two little toy animals and gave them to him to play with, it was a really lovely touch, the restaurant obviously didn't mind them being there at all. 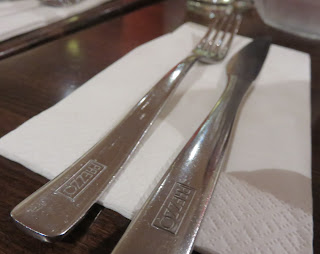 When our food arrived, all freshly cooked and piping hot, it was quite fun fitting it all on the table. A giant bowl of pasta, two huge garlic breads and all the other plates and glasses, there was hardly any room for cutlery, the Little Ones thought it was great and couldn't wait to get stuck in. 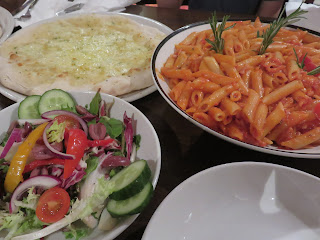 While Daddy cut the garlic bread and pizza, I was 'Mum' as usual and served up the children's pasta, I didn't even seem to make a dent in the #LaFamiglia sharing bowl! Once the Little Ones were tucking in I divvied up for Daddy and I, we had a decent plateful but had only cleared half the bowl, we hadn't needed to order that pizza after all! 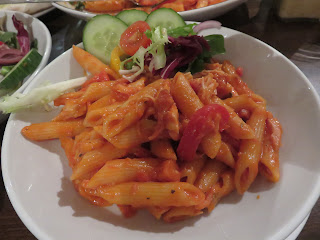 Everyone tucked in happily, with little hands helping themselves to garlic bread and a few fries. Little 3 loved his pasta and was having a good giggle at slurping up the saucy penne. It was one of those family mealtimes where everyone was relaxed and could eat as much as they wanted, and best of all I hadn't had to cook it. 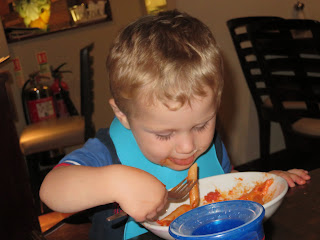 I was really impressed with the value for what you get, the #LaFamiliglia sharing bowl was larger than I had expected and more than we could eat as a family with small children, it would have easily fed 4 adults and priced at just £18.90 it was well worth it. Nanny and Uncle M were stuffed from their own mains and couldn't help us eat anymore of ours and so we actually took some home in a doggy bag as well as almost a whole garlic bread. 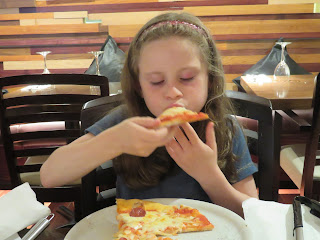 It doesn't matter where you go and how much food there is on the table however, sibling rivalry still happens! In our case the girls were happily commenting on who got the largest slice of garlic bread or the longest chip and there was a little look between them I managed to capture when they both wanted to be the one to wipe the little ketchup pot clean! 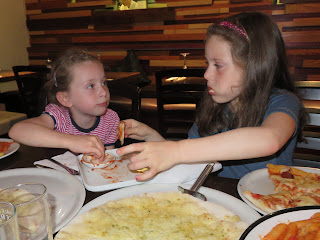 We all really enjoyed our meal and managed to squeeze in an ice cream each. I tried the blood orange and the mango and lime sorbets which were really tasty and refreshing while Daddy had the salted chocolate ice cream which he said was rich and full of flavour. The Little ones all had their favourite strawberry and judging by their clean bowls it was rather yummy too. 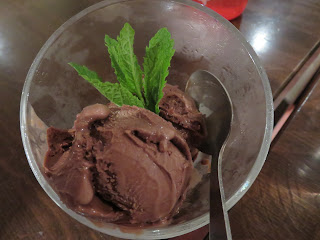 We all enjoyed our meal at Prezzo, the staff were really friendly and accommodating which made a meal with young children a much happier experience. The food was tasty and delicious and the #LaFamiglia pasta sharing bowl was superb value considering it fed Daddy and I for lunch the next day too! This was our first trip to Prezzo and it will certainly not be our last. 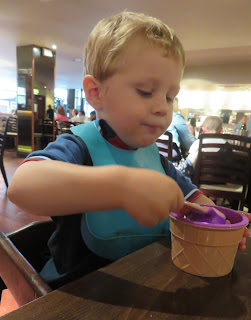 This post is an entry for the BritMums #PrezzoLaFamiglia Challenge, sponsored by Prezzo.

N.B We were provided with a voucher for a #LaFamiliglia sharing bowl, 2 garlic breads, 4 soft drinks and 4 icecreams by Britmums for this review. Prezzo kindly offered us the sides complimentary too. All opinions are our own honest thoughts.
at 9:43 pm
Email ThisBlogThis!Share to TwitterShare to FacebookShare to Pinterest
Labels: food, review