Now that we have been back at school (myself included) the past few days I have had time to think about the super Easter holidays that we have just had, normally we don't do anything at Easter as Daddy is working but this year we did things differently, Daddy took a week off and we had such a good time.

After returning from a long weekend at Butlins celebrating Daddy's 40th birthday with family we spent a few days at home together, an afternoon doing an Easter duck hunt at the local wetlands centre and exploring a new National Trust house near us too.

We then had the opportunity to join friends in Cornwall for bank holiday weekend and decided to go, we were so glad that we did. 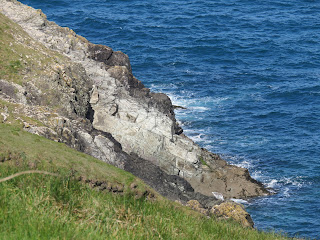 The weather in Cornwall that weekend could not have been more beautiful, wall to wall bright sunshine filled days, warm enough for short stints in swimsuits and a jumper on the beach, and with friends to play with too, the Little Ones were in their element. 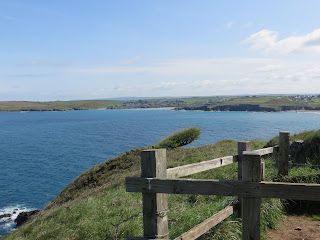 The bright blue cloudless skies made the sea look inviting even though it was still freezing cold, this however didn't bother the girls who popped on a wetsuit and had a go at boogie boarding squealing with delight and coming out with blue tinged lips a short while later, they thought this was utterly great. 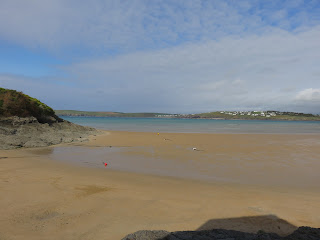 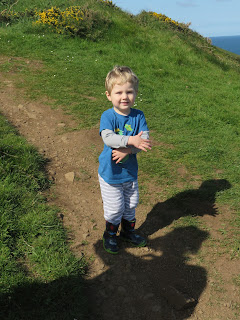 We took a couple of short strolls along the cliff tops admiring the scenery and taking in the views, all the while the Little Ones shedding their coats and jumpers while we walked. Little 2 was running on ahead enjoying the fresh air and her freedom while I was trying not to frighten other walkers on their way by hollering her name calling her back incase she went near the edge! 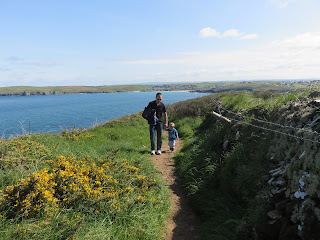 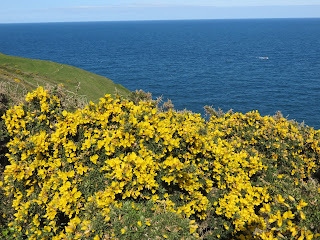 We didn't go far, the children (and Daddy) spent a lot of time on the beach in the cove where we were staying as soon as the tide went out digging rivers, creating pools to paddle in, giant sandcastles and mountains which we then watched the sea consume as the tide came in again. 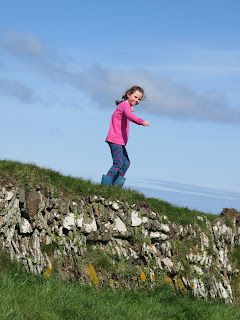 Another afternoon we explored the rocks and pools looking for sea creatures but I think the children pretty much scared them all away as they didn't find very many although there were plenty of sea anemones and mussels on the rocks. 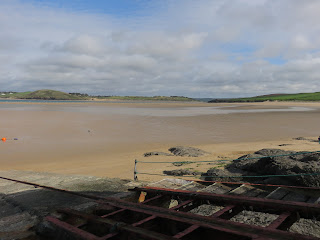 It was a really great weekend, just relaxing and not doing much at all except eating, chatting and playing on the beach. We did drive into town one afternoon for the obligatory pasty and an ice cream and a mooch around the harbour shops.

On our way home we stopped at Roadford Lake outside Launceston, somewhere we have visited several times before. We had coffee and cake (well, the Little Ones had enormous icecreams instead) looking out over the lake before the Little Ones had a play in the play area. 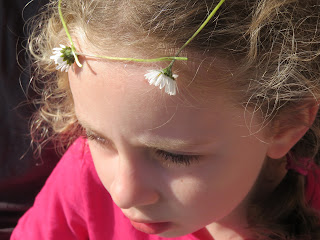 The girls spent time collecting Daisies, Buttercups and wild flowers to make necklaces and tiaras as we went for a walk partway around the lake thinking how lucky we had been with the weather. 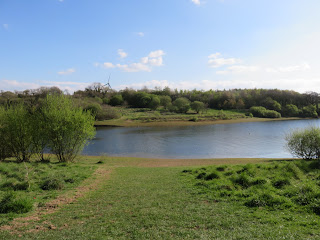 Little 3 spotted a wind turbine across the lake in the distance (In the picture above 1/3 of the way across in the tree line) and bless him sat there blowing it saying 'blow, windmill' and puffing with all his might. 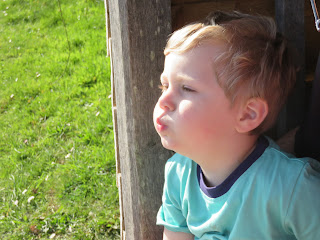 As I smiled to myself at his innocence and happiness watching the turbine going round in the wind while the girls sat at our feet making Daisy chains I really did feel like we had had such a lovely easy going Easter weekend and we all felt better for it.
at 7:00 am
Email ThisBlogThis!Share to TwitterShare to FacebookShare to Pinterest
Labels: holidays