A potty training toddler, a week on

If you read my post 'It is time for big boy pants!' then you will know that the past couple of weeks we have been attempting to toilet train Little 3. 'Attempting' was the word the first few days when things really didn't seen to be going all that well and I was beginning to think 'perhaps, he isn't ready yet' even though I had been sure he was.

On that first day Little 3 had an awful lot of accidents, which was to be expected. He would sit on the potty happily enough but only for the briefest of moments before declaring he had finished and jumping up only to go a minute later in his trousers, I am pretty sure he didn't yet know what he was supposed to do even though he has been sitting on the potty at bathtime and bedtime for a while now. We tried all sorts, songs, stories, watching his favourite tv programmes, a snack and even just a cuddle (which was not good for my back at all) throughout the morning to try and get him to sit a little longer but no luck. We tried the toilet too where he had a trainer seat and steps, but it just still wasn't happening, he simply did not want to sit still. 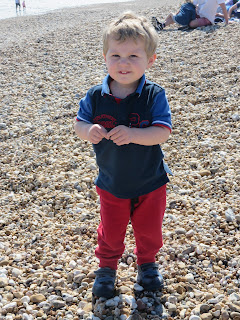 Later on in the day he did a wee on the potty and was very pleased with all the praise from us and his stickers that he managed another before bedtime too. By the end of the first day I was quite pleased with his progress - in the morning he had had no clue that he was going, by lunchtime he was telling me that he was wet and by bedtime he was giving us about 2 seconds warning before going, pretty good for only one day in pants I think.

This continued for a couple more days, lots of wet accidents and not a lot of sitting, however he had mastered the other for which he was asking to use the toilet, we had 2 more days until the end of the Easter holidays and I decided to give him until then and go back to nappies if he was still having so many wet accidents.

On day 4 something clicked and instead of 'catching' wee in the toilet when taking him every half hour and getting him to sit for a bit he had learnt to 'try to go' and was able to do so when asked if he needed to. This meant a lot more went on the toilet and an awful lot less laundry for me. We decided things were going in the right direction to ditch the nappies for good and carry on.

On day 6 he was dry all day and even asked to go once or twice which was great and there were no accidents on day 7 either, over these two days we even managed school/childminder runs, a trip to the supermarket and a trip to school to watch Little 2's assembly successfully.

What has amazed me the most is the whole week we had been putting a nappy on him for naptime and each day he had woken up bone dry and he had also had several practically dry overnight nappies too. What a superstar.

We are now on day 10 and happy that he is doing really well. We have been trying out a few different potty training items at home this week and will be reviewing them for you over the next week or two but this week our saviour has been our bumble bee 'My Carry Potty'. 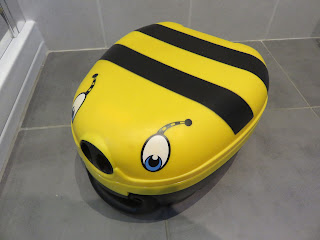 Simply a potty with a lid and leak proof seal that has been everywhere with us under the pushchair or in the car, it looks great and beats a standard potty in a carrier bag any day while we are at the 'I need to go right now 'stage. I like that you can just close the lid if you are not anywhere you can dispose of the contents immediately and know that it isn't going to leak. Little 3 loves his bumble bee and we have had quite a few positive comments about it too.

Check back soon to see what else we found handy while potty training Little 3.
at 10:02 pm
Email ThisBlogThis!Share to TwitterShare to FacebookShare to Pinterest
Labels: little 3, potty training