It's 4pm on a Thursday afternoon, we have just walked in the door from school and the Little Ones are STARRRRVING, I have given them an apple and a biscuit which won't placate them long, the toddler is clinging to my legs shouting 'ungee' (hungry) and asking to be picked up. Glancing at the clock I realise that we have to be at Brownies in an hour and I need to feed them fast.


I have been challenged by BritMums and Dolmio to create a #ThankGoodness good-for-you mid week meal from a hamper of good things delivered straight to my kitchen including a jar of Dolmio bolognese sauce which contains no artificial colours, flavours, preservatives or sweeteners.

So with time pressures on our hands what did we cook? 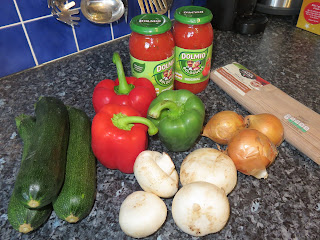 We grabbed this little lot and the beef mince and began to make a good old hunger busting vegetable packed spaghetti bolognese, Little 2's favourite dinner. With the girls wanting to help with the cooking that night there were plenty of hands to chop the veg and get the meal cooked in time. 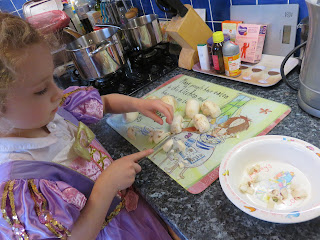 Little 2, complete with princess dress, was on mushroom chopping duty while Little 1 was tasked with doing the courgettes and peppers. I prepped the onions while singing nursery rhymes to Little 3 who was still camped out on my right leg! 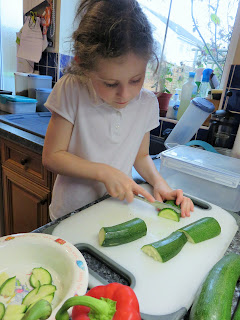 As everything was chopped and ready it just got thrown in the pan onions, mushrooms, peppers, courgettes all in together with a clove of garlic and a handful of dried mixed Italian herbs from the cupboard, no faffing about measuring things here. Next went in a jar of Dolmio Original Bolognese sauce.

Many people believe that ready made sauces are full of additives but in fact with Dolmio this is not the case. Each jar of Dolmio Bolognese original 500g is 100% natural and one of your 5 a day too. In each jar you will find at least 10 juicy diced tomatoes, a dollop of puree, half an onion, a tablespoon of sunflower oil, a couple of cloves of garlic, a handful of herbs including basil, a teaspoon of cornflour, a teaspoon of salt, a pinch of pepper, two teaspoons of added beet sugar to taste, a squeeze of lemon juice, a splash of water and nothing more. 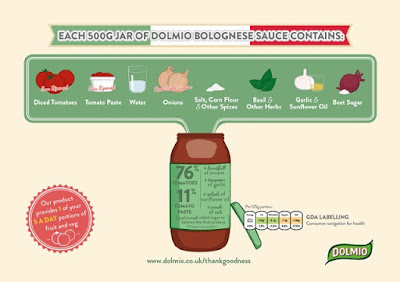 With the vegetable packed sauce cooking away nicely I browned off the mince and started to cook the spaghetti. Before long it smelt delicious and was almost ready. 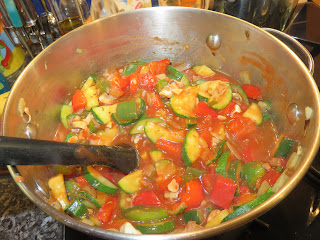 We had managed to make an enormous pan of tomatoey vegetable sauce, enough for three different meals for the five of us. There were a lot of giant vegetable chunks in there and although the Little Ones are good at eating their veg I popped the hand blender though it a little to make it a bit less chunky before adding a third of it to the mince to make our bolognese.

While all the spaghetti bolognese cooking was going on I happened to be preparing another meal using the same sauce, you see Little 1 REALLY doesn't like mince, never has even as a baby she would gag and refuse to eat it- I think it is the texture as she doesn't like burgers or meatballs either. As she really doesn't like mince I will cook something slightly different for her on that day, it is the only time I will cook a different meal in our house as normally we all eat the same thing.

So that night Little 1 had pasta, the veg packed tomato sauce and some cooked chicken breast instead of the mince version, you could easily add veggie mince or tofu or something else instead too.

A sprinkling of grated cheese and a slice of garlic bread finished off the plate nicely and I was happy to see clean plates and orange faces all round and all in time to go to Brownies!

We had only used a third of our pan of sauce so I popped a container full in the freezer to make an even speedier bolognese another night and the following evening we did something else with the rest of our yummy sauce. This time we all had cooked chicken breast, the veg sauce with another jar of dolmio thrown in to add a bit more of a tomato flavour and home-made potato wedges served with peas and sweetcorn. This too was a massive crowd pleaser and super wholesome with all the veggies in it. 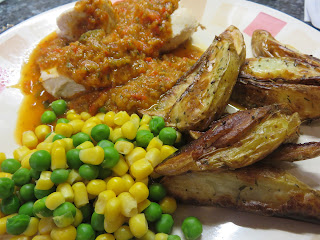 To make our wedges I chopped potatoes with the skins still on and tossed them in a deep pan with a little oil, mixed herbs and crushed garlic and left them to cook for around half an hour turning them as necessary. So there you have it two super quick and tasty healthy family meals. 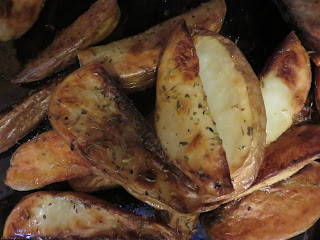 So what can you do with a jar of Dolmio sauce for a speedy #ThankGoodness mid-week meal? For more information or inspiration visit Dolmio or check the label on their jars.

N.B This post is an entry for the #Dolmio #ThankGoodness Challenge, sponsored by Dolmio.
at 9:55 pm
Email ThisBlogThis!Share to TwitterShare to FacebookShare to Pinterest
Labels: helping