I have said it before and I will say it again that keeping three children entertained indoors for a whole day can be hard sometimes, especially when they include a toddler. With the recent wet, windy, wintery weather we have been having we haven't been able to get outdoors as much as we would like at weekends, but we have still been trying to get out even if only for a short trip to the park or a scoot around the block.

Last weekend it was chilly and windy and the threat of rain hung heavily in the thick black clouds outside but we decided to take the Little Ones out for an hour anyway as we all needed to run of some excess energy, they were going bonkers indoors. 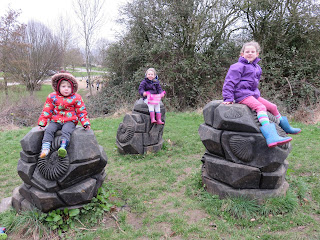 We wrapped up warm with jumpers, hats, coats and wellies and set off just down the road to a spot we don't frequent nearly enough. A hill with short walks, a view point and plenty of things to climb on and entertain three children. The Little Ones were all in good spirits and we took the opportunity to take a few pictures of all three together, the last time they were all willing to pose together was at Christmas! 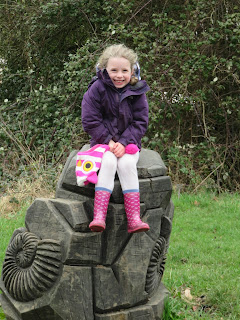 After a bit of climbing and a few (or not so few) goes on the slide we set off up the path thinking we might just do a small circuit as it looked like it was going to start pouring down any minute. Within about two minutes both girls had started collecting sticks and were stomping through a leaf filled gully getting thoroughly muddy and having a great time. 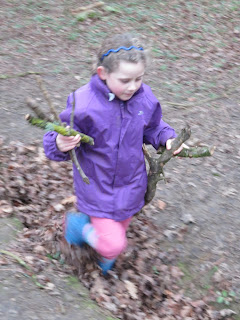 Very soon there were armfuls of sticks and the girls were asking us to carry them, having seen the colour of the sky and thinking we really did need to stay near the car I suggested we built a den. The girl's eyes lit up and we looked for a suitable spot. 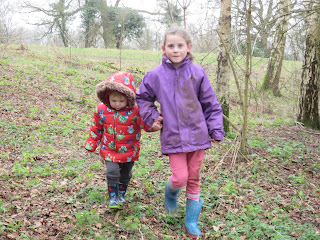 Then the building began, the girls set off to find logs and sticks to give to Daddy to build the den up against a tree they had chosen. There were big logs and little sticks and plenty in between. 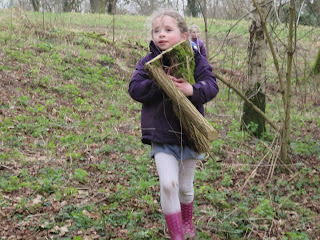 It wasn't long before the den was good enough to play in and the girls looked pretty pleased with themselves. By now it was raining a bit but not too heavily and they still wanted to play so we allowed them a bit longer. 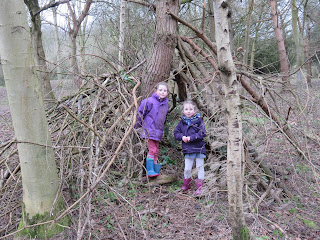 While the girls were busy building Little 3 was exploring, he was particularly interested in pinecones and the spiky evergreen trees. It was great to watch him feeling, finding out and learning, he loves the outdoors as much as his sisters do. 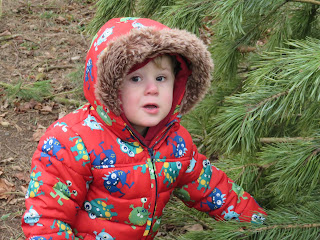 We decided to head back down to the play area next to the car, as I knew any minute the heavens would open. The Little Ones all went on the slide once more and climbed on the climbing frame. While the girls were busy I watched Little 3 trying to navigate a set of steps by himself, he can't go down steps without holding on at the moment and there wasn't anything to hold on to so he was trying to step down but was wary in case he lost his balance (I was right there in case he did!). He ended up sitting down and going down on his bottom instead which is what he does on the stairs at home. 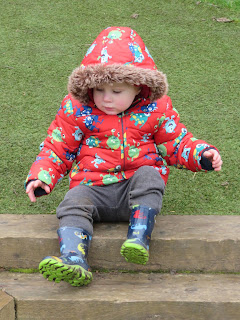 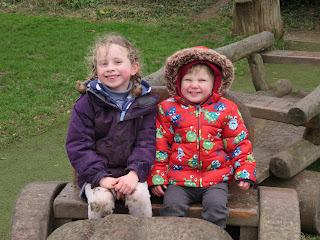 Suddenly the rain began to pour and I mean pour, we were close to the car so all dashed to it and jumped inside, as we shed our coats the girls were talking about their den and saying what a brilliant time they had had, they wanted to know when we could come back and visit our den again. I think we all had a great hour on the hill that day and the rain really didn't stop the Little Ones play.
at 10:52 pm
Email ThisBlogThis!Share to TwitterShare to FacebookShare to Pinterest
Labels: imagination, little ones, out and about, walking