The Little Ones go ice skating

Over the Christmas holidays there was a pop up ice rink in town and Daddy and I decided to surprise the girls with an ice skating treat the day before Christmas Eve as they had both tried so hard and done well at school this past term despite being under the weather for the most part of it.

With Little 3 being too young to skate we arranged to meet Nanny in the cafe across from the rink so that she could watch him for us while we skated with the girls. We had not told the girls why we were going into town and there had been a little reluctance on the part of Little 1 about 'going shopping'!!

On arriving the girls were surprised to see Nanny waiting there and as we stood next to the rink they couldn't help but peer over the rail watching all the skaters. It was then that we told them about their surprise. Little 2 just broke into an ear to ear grin and looked rather happy while Little 1 totally forgot she was grumpy and fist punched the air jumping up shouting ' Oh, Thank You'. 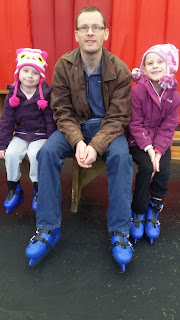 Years ago, and I mean about 15 (possibly more) years ago when Daddy and I still lived at home, we used to go ice skating at least a couple of times a month and both owned our own skates (they are still in the loft but are in desperate need of sharpening now). While neither of us could do anything fancy we were pretty nifty on our skates and able to weave between the other skaters at quite a speed. I remember Daddy had even learnt to skate backwards a bit (although he says he didn't but his memory is pants!).

Taking the Little Ones ice skating was something we both wanted to do as we enjoyed it in our teens and it is great exercise too, we knew the girls would have lots of fun. Having arrived early for our slot we got our skates on and waited in the waiting room for our session. 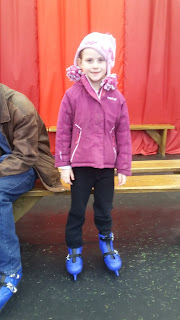 Little 1 being of a nervous disposition could not sit still and although she was very excited she was a bit nervous too about whether she would fall over. Little 2 was rather excited and sat quietly watching the other skaters with a big smile on her face. 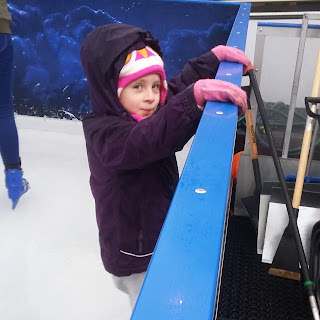 We had hired one of those whale things to help the girls, you can either sit on it or push it around to help with balance. Little 2 didn't want any help and as soon as she set foot on the ice she was off holding on to the rail and side stepping her way around, she was determined to be independant.

Little 1 first sat on the whale to get a feel of the ice but was soon wanting to get up on her feet too, Daddy found his feet faster than me and so he was off helping the girls around taking it in turns to do circuits of the ice. 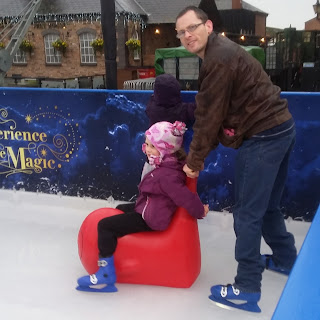 It had started to rain a bit before we had to go onto the ice and there was a lot of surface water, being an outside rink this had made it incredibly slippy, with me not having skated for 15 years I was slipping all over the place and found it tricky to help balance a child and myself but we didn't fall over! 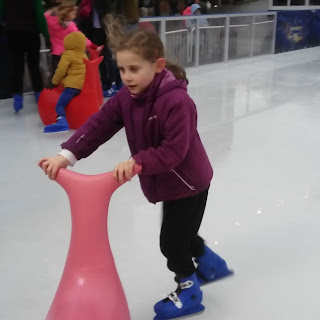 We soon all found our confidence and our feet. After going around with daddy for a while Little 1 had a go with the whale and did quite well . 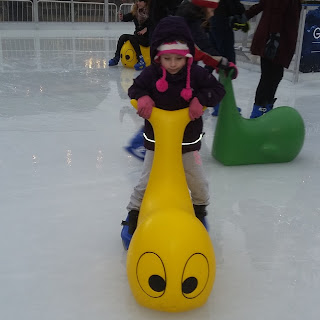 Little 2 who is fiercely independent at the moment, was not bothered by all the adults and older children on the ice, she got her whale and off she went, she took herself right into the middle of the ice rink skating around the tree in the middle and didn't look back. She was out there ages smiling as she went around, perfectly happy as we skated around her. 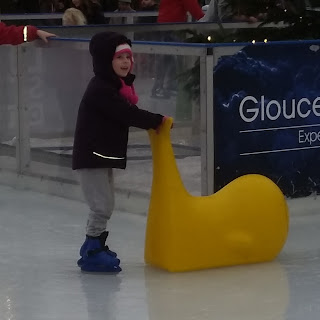 The rink is down now but the girls are still asking to go again, as they had great fun, Daddy and I enjoyed ourselves as well. The quality of the photos in this post is rubbish as I took them on my phone in the rain and fading afternoon light. I didn't want to take the proper camera on the ice in case I fell over and broke it! I think we will be checking out our nearest proper rink very soon.
at 4:30 pm
Email ThisBlogThis!Share to TwitterShare to FacebookShare to Pinterest
Labels: days out