Playdough- one of your 5 a day, right?

''Paydoughs' Mummy, Pease'' I hear coming from over by the craft cupboard, a look of longing on Little 3's cheeky face as he tugs on the hairband I have wrapped around the handles to prevent him getting all the paint out. There are very few days that go by where he does not ask to play with the colourful squishy stuff, I find it hard to resist that little grin and he knows it. 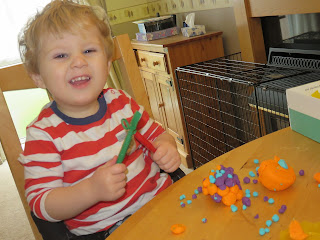 After selecting his colours and the box of tools he will take it over to the table and ask to sit in the highchair. It is quite a therapeutic thing playing with playdough when you are a grown up and I actually really enjoy it! 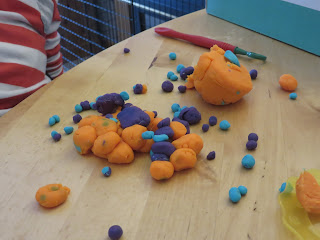 We make all manner of things together but often lots and lots of little balls, you see Little 3 has a thing about rolling and throwing at the moment and loves making the little balls of playdough roll around the table and generally litter the carpet with for me to clear up! 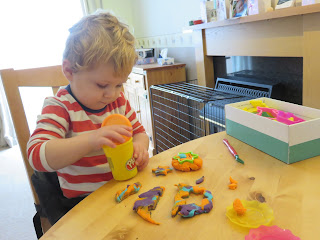 Little 3 is fully in discovering and investigating mode at the moment, he will sit for ages trying to put the lid on the playdough tub or looking at the shape cutters and cutting out shapes. He can name quite a few now. 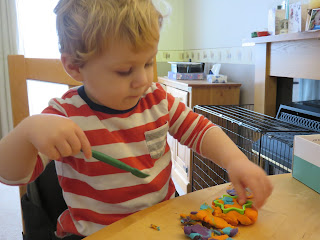 We have picnic parties together, where we make playdough biscuits and plates of food. Little 3 is using a little knife and fork at meals now instead of a spoon and loves to 'chop', he spends a great deal of time trying to chop his playdough and practice cutting. 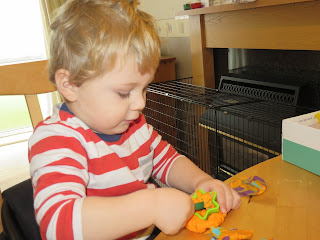 But like many things with a 22 month old, the playdough always ends up in his mouth, sometimes we will play for nearly an hour and others just 5 minutes before the stuff gets closer to those cheeky chops. 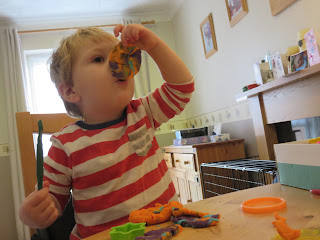 He gets a warning and I tell him 'No' but still he looks at me with that sneaky look and tries a nibble, I tell him if he does it again we will put it away and then we do because inevitably he has put it in his mouth again. But playdough, it is one of your five a day right?
at 10:51 pm
Email ThisBlogThis!Share to TwitterShare to FacebookShare to Pinterest
Labels: little 3, messy play