I have to be honest and say I have been a little slow in feeling festive this year, I know there are still over two weeks to go but I am usually humming Christmas tunes constantly by now!

We have had 6 weeks of illness in our house, the children seem to be picking up one thing after another resulting in numerous broken nights, temperatures, trips to the doctors, antibiotics, and a few days off school too. As I write Little 2 is sat next to me off school with a fever and Little 3 is napping, but he is hot and plastered in spots! Everyone is pretty tired and grumpy too including me and I wasn't feeling at all festive.

After visiting a local Enchanted Christmas event at the end of November I began to feel a little bit festive and decided I need to stop worrying that everyone keeps getting ill and bring on the festivities.

In the last few days I have written my Christmas cards and the girls have written theirs and handed them out at school, they have also posted off their letters to Santa and are hoping for a reply soon. The Little Ones are going over to Nanny's for a few hours at the weekend so that Daddy and I can had a massive present wrapping session while they were out, and then that will be the vast majority of that done too, just a few last gifts to find for one or two people now. 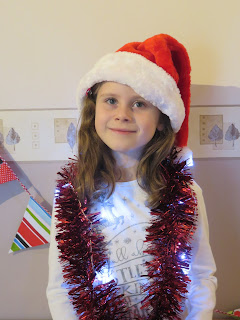 The little Ones have dug out their Christmas themed clothes and been wearing them lots, we had a mini Christmas photoshoot too which was a bit of fun and literally lasted two minutes before Little 3 had had enough! I don't think we did too bad for photos although we didn't get one of all three looking and smiling at the same time! 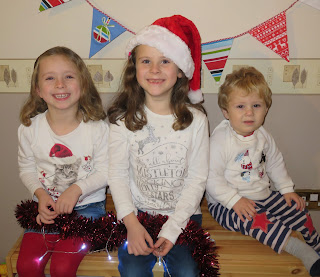 This past week has seen Little 2's school Nativity play, A Christingle at church with Little 1's Rainbows group and their Christmas party, and Daddy's work Christmas do too.

Little 2's play was lovely, all the little reception children doing so well and singing beautifully. Little 2 was a star in the play and had lots of glitter in her hair and a glittery skirt she kept telling us about, she was so excited and had a big smile on her face throughout the performance. I would love to show you some pictures I took or a little video of her singing but there are lots of her classmates in the shots as she was at the front so I can't, but believe me it was lovely.

The same evening we went over to the local church for a Christingle service for the Rainbows, Brownies, Cub and Scout groups, the church was full and the children took part in the service doing readings and explaining about Christmas. We sang carols and got to have our own candle to hold too. I enjoyed joining in with the carols and at the end all the children sang 'We wish you a Merry Christmas', it was a great start to the festive spirit for me hearing the children sing and I did feel a lot more Christmassy afterwards.

We tend to leave it until the second weekend in December to put up our Christmas tree and decorations with the help of the children, as it is Nanny's birthday in early December and we celebrate that first plus with two cats and a toddler undecorating the tree daily, that is early enough for us. We are planning on doing it tomorrow after school with all the Little Ones. I am looking forward to the house feeling warm and cosy with the coloured lights and strings of festive bunting.

This coming week sees Little 1's school Christingle at the local church and several fun things at school, I can feel that the end of a busy school term is around the corner now too. We have plans to take the girls ice skating at the pop up rink in town and a few other little surprises in store for them during the holidays.

I am definitely beginning to feel more festive now.
at 12:15 pm
Email ThisBlogThis!Share to TwitterShare to FacebookShare to Pinterest
Labels: christmas