A little boy and his love of trains

Over the past few weeks it has become clear that Little 3 has developed a love of trains or 'choo choots' as he calls them. We used to get the train track out to play with here and there a few times a week, we would build a track, play for a bit, whooshing the trains over the bridge and then put it away again after he had long abandoned it for something else.

But this past 2 weeks he has barely played with anything else. The train track has sat out on the carpet and hasn't moved for over a week, he just keeps going back to it. He will take me by the hand and say 'help, Mummy' as he pulls me over to the spot on the carpet and passes me a piece of track. Together we build/repair the track complete with a bridge and begin to play. 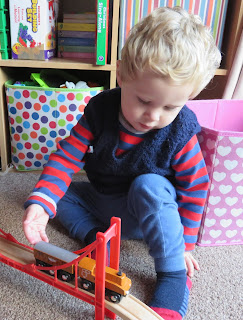 He likes to make choo choo noises as he pushes the trains around the track, ever so carefully so they do not come off. As he nears the bridge he grins and gives the train a little push watching as it speeds and then slows down. If one does happen to fall off the track he cries 'oh no' and carefully puts it back on again. 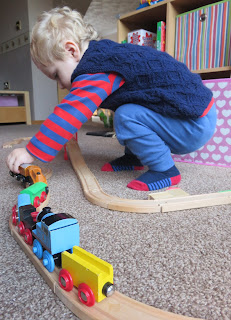 It amazes me that at only 20 months old he is so caring and careful of his trains and track, there are not many toddlers who wouldn't destroy a track after a few minutes play, but with Little 3 the track remains out almost completely unharmed to return to later. I haven't had the heart to tidy it up at all this week, he just keeps going back to it, we change the track and play some more and in a way it is quite therapeutic. 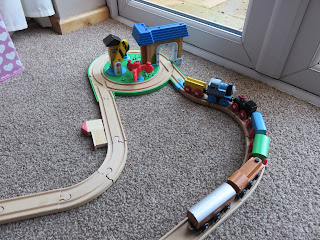 I have watched him discover the wonder of magnets as he tries to put the trains together looking bemused as they repel and then a little smile of approval as he works it out. A little line of trains on the track, that is my boy right now. 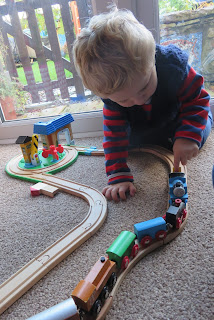 It has probably stemmed from an introduction to Thomas and Friends which we recently began recording for him to watch, he loves it and asks to watch an episode daily. My personal favourite train character is Percy, his round friendly face and my favourite colour green. Little 3 likes Thomas, he probably recognises him as that is the only train we have from the show at the moment. 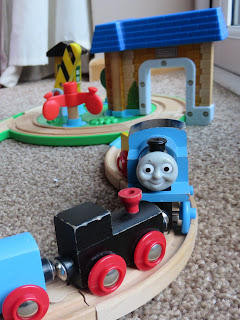 When we have been out Christmas shopping Little 3 usually sits quietly in his pushchair taking in his surroundings and watching the world go by but if he spots a train or Thomas memorabilia his face lights up and he shouts 'Choo choots Mummy, choo choots', I love it. 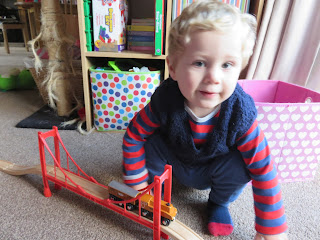 No trouble knowing what to get him for Christmas this year then!
at 8:37 pm
Email ThisBlogThis!Share to TwitterShare to FacebookShare to Pinterest
Labels: little 3, toddler, toys