Little 3 is a funny thing. The first word he says when we walk through the door after the morning school run is 'snack?' and the first word after his nap is 'lunch'. The way to this boy's heart is definitely through his stomach! He eats a healthy nutritious diet and doesn't drink much milk anymore, but with a small toddler tummy he is always hungry and eats regular snacks at times through the day.

When we were asked to taste test the Heavenly Tasty range of organic baby and toddler snacks I said yes please, Little 3 would certainly give them a thorough try and over the past month he has been doing just that. 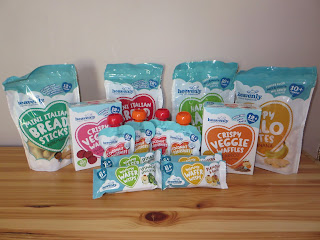 Heavenly was created by Shauna McCarney-Blair, mum of four and lover of all things organic and nutritious. Shauna came up with the idea for Heavenly soon after she started weaning her first child, when she was frustrated by the limited choice of healthy, allergen friendly baby food products. Suitable for babies from 6+ months, the range is jam-packed with superfoods including spinach, kale, pumpkin and coconut milk and has no nasties. 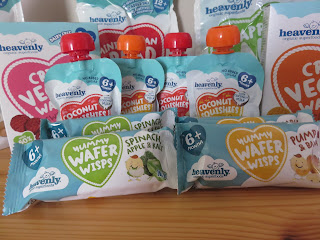 Toddler snacks are handy for us, Little 3 naps 11.30-1pm, he won't eat lunch before he sleeps as he is too tired and doesn't sleep long if he goes down hungry and so he tends to have a snacky lunch with a bit before bed around 11 and the rest when he wakes. They also come in pretty handy in the pushchair or out and about as they are easily portable too.

Mini Italian Breadsticks 12+ months -Original and Rosemary flavours.
These are a great size perfect for toddler hands and great for dipping into cheese spread or hummous. They don't go soggy or make a mess when Little 3 sucks all the dip off them but they are also easy to eat and are quite filling. They come in a resealable bag which is handy. The rosemary flavour ones are mild and pleasant but that flavour is not something Little 3 is used to, he ate most of them but not as readily as the Original ones which he preferred. 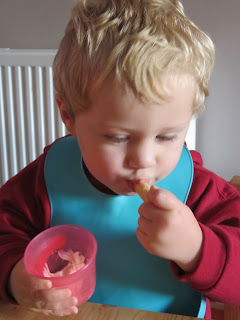 Crispy Veggie Waffles 12+ months -Carrot and Cumin/Sweet Beet and Shallot.
These are a brilliant idea, Little 3 is used to seeing his sisters eating crisps sometimes and these look just like crisps so he was thrilled to have a pile of them on his plate alongside some crudite bits. I was intrigued and had to taste them myself, the Carrot and Cumin ones had a flavour that was quite strong and not unlike curry powder, I wasn't keen but Little 3 ate the lot and asked for more.
The Sweet Beet and Shallot ones certainly brightened up his plate and tasted good too, they do however give you a fright when changing the next dirty nappy until you remember what you fed him!
The Veggie Waffles made a nice change to sandwiches, crackers and breadsticks at lunch and went well with bits of carrot, cucumber etc.

Happy Halo Bites 10+ months -Apple and Banana flavours
These are little rings of grains and flour blended with fruit and nothing else. Little 3 loved both flavours. He had them in the morning as a dry cereal with fruit and yoghurt and they also made a great snack when I put a few in a pot to keep him entertained in the pushchair as they took him a while to pick up and eat. The packaging is resealable too so they stay fresh and crunchy.

Yummy Wafer Wisps 6+ months -Pumpkin & Banana/Spinach, Apple & Kale.
These were a bit like a crackerbread type of texture and have a mild flavour. They are quite large and there are 3 to a packet, I personally think 2 was enough as I would not normally give Little 3 that much for a snack and one would be plenty for a younger baby. The wafer wisps are great for keeping under the pushchair or in the change bag however the pack is not resealable so you need to take a clipit or something out with you for the one left behind. They were easy to eat and dissolve without making a mess, great for weaning or teething tots. 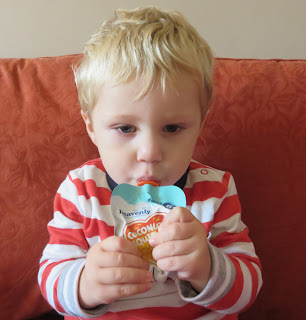 Coconut Squishies 6+ months -Strawberry, Apple & Banana/-Mango, Apple & Banana.
We are big fans of fruit puree pouches in our house, Little 3 eats one most days and the girls have them in their lunch boxes at school. Heavenly Tasty Squishies are organic fruit with coconut milk and a dash of lemon juice. One of their 5 a day and nothing added not even water. Little 3's squishy was gone in seconds and he didn't noticed it wasn't his usual flavour. We persuaded the girls to try them (because neither likes coconut) they said they were okay too. I had a taste and thought they were very similar to other pure fruit pouches but with a slightly creamy taste, yum.

These products are available to buy at Ocado, Tesco, Asda, Waitrose, Morrisons Boots and a few others as well as online at HeavenlyTasty.com.

We enjoyed trying out the Heavenly Tasty range, Little 3 is eating the same snacks as the girls in general now but I will continue to buy the Happy Halo bites as they were quite handy and he really liked them. The squishies will be making their way into my basket too as an alternative fruit pouch for us too.

N.B We were gifted the products pictured above for this review, all opinions are our own honest thoughts.
at 10:46 pm
Email ThisBlogThis!Share to TwitterShare to FacebookShare to Pinterest
Labels: little 3, review, toddler