Little 3 has fun with shredded paper

Last week I received a lovely hamper and within it was armfuls of black shredded paper, as soon as I saw it I knew what I was going to do with it, messy play with Little 3. Now that both girls are at school full time I want to do more with Little 3 and get back to the creative, messy and baking activities that I used to do so much with the girls. I am not a lover of mess and have shied away from messy activities a bit since Little 3 came along, the idea of three children playing with gloop and paint scared me a little, after all the carpet in the lounge is pale and the kitchen, with the washable floor, is just too small.

I retrieved the tuff spot from the garden where it has been used for water play and dolls picnics all summer and put the paper inside along with Little 3's wooden dinosaurs. 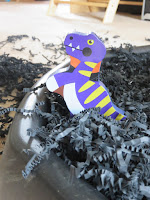 Little 3 was not interested in the dinosaurs AT ALL but he instantly began picking up handfuls of paper and dropping it in little piles around the room. He was ever so methodical and spread it out carefully selecting a spot for each handful rather than putting it on top of another. 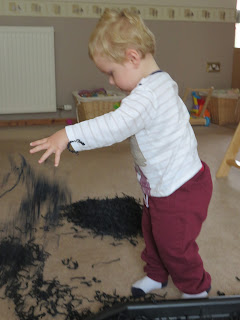 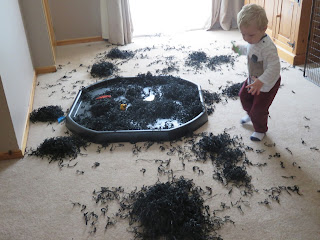 In no time at all he had made quite a creation. It was funny what he did with the paper, I thought he would feel it and pull it apart or look intently at each concertinaed piece but he didn't. 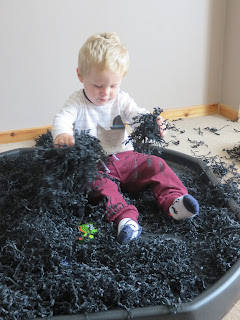 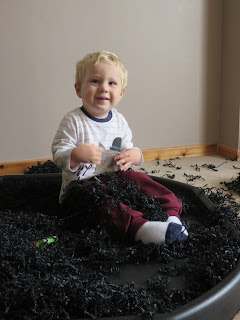 After a bit of coaxing he realised he was allowed to go in the tray and had a bit of a sit down. Again depositing handfuls of paper out the sides of the tray, he thought it was great and there was lots of concentration on his little face.

There was then a little bit of throwing and dropping it all over his head mixed with lots of giggles, admittedly initiated by me! 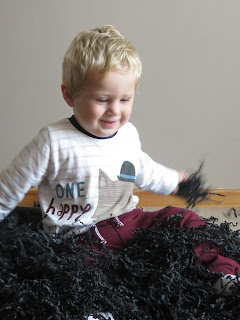 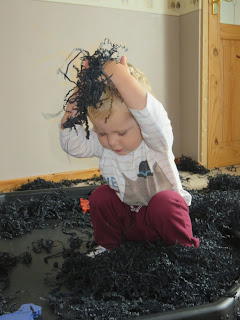 It was at this point that he was starting to stand on the stuff, it made quite a loud crunching noise which he thought was good. He began running around the tuff spot giggling as the paper crunched beneath his feet, I took a few photo's but they were rather blurry as he was going so fast! 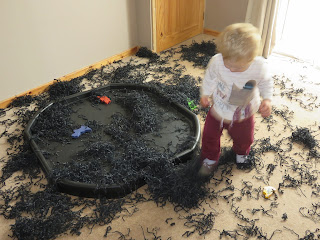 After a good 20 minutes of play my lounge looked a tad messy and Little 3 was beginning to get bored of the activity and traipse the paper around the rest of downstairs so I fetched the bin and he helped me pick it all up. He kept tidying until it was just the little bits left and I whipped around with the hoover for that. 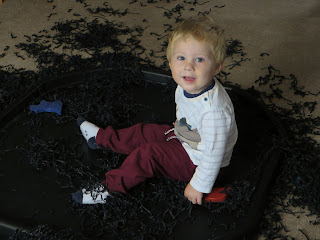 Little 3 seemed to enjoy his shredded paper play and I did too. I have been thinking what we could play with next time, cereals maybe? 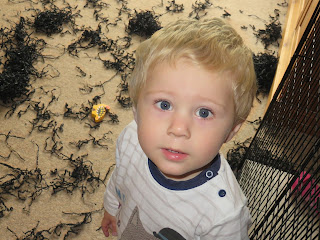