Little 3 takes in the rockpools

If there is one thing the Little Ones love the most it is the beach, they could play for hours and hours in the sand digging and building sandy forts and castles. They love being at the water's edge, paddling and jumping waves although none of them has been brave enough to actually go in past their knees yet.


Days on the beach usually end up with the Little Ones driving home in underwear with a blanket and bare sandy toes because both sets of clothes and the swim suits got wet as they just had to go back for one last play, ice cream dried onto those happy little faces and straight up into a warm bath when we get home.

With our nearest beach from home being about 45 minutes away, our most recent trip to the beach was on holiday and it was an exciting event because it was Little 3's first proper beach trip. He has been to the beach several times before in the pushchair last summer when he was tiny and earlier in the holiday but he preferred to nap and didn't like the cold sea on his toes so we took him for a walk instead. 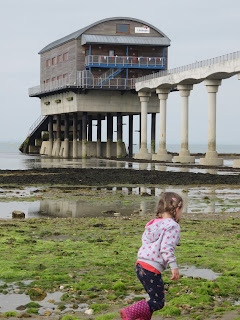 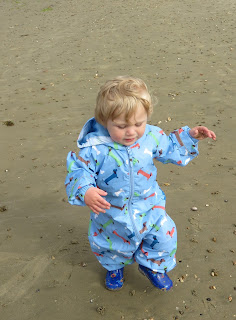 This time it was a bit chilly, leggings and t-shirt kind of weather and although some brave souls were out in their swim suits the girls kept their clothes on. There was a pretty nippy wind too as the tide was on the turn so we headed down to the beach with jumpers and wellies too. I knew that Little 3 would fall over a lot on the uneven sand having not been walking long and I wanted him to be free to explore without feeling cold and wet so we popped his wellies on too and his waterproof suit and off we went. 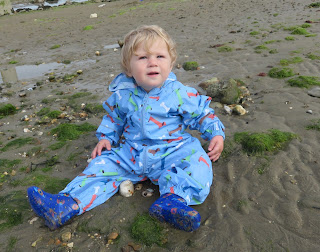 At first he wasn't really sure what to do and just kept stooping down to poke the wet sand and rub it with his fingers then offer me his hand to wipe it off, I am not sure he liked the gritty texture. Once he had done that for a while he found his feet and began to wander along the sand, run and fall over a lot which was quite funny as he obviously wasn't keen on touching the sand as he would sit there looking at you to come and stand him up again so that he didn't have to touch it. 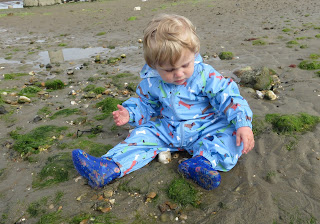 We then led him down to the rook pools where the girls were busy with their nets attempting to catch some creatures but they were not having any luck, I think their technique needed a little practice as Little 2 was catching net fulls of sand and Little 1 was swishing wildly scaring off anything within a 5 metre radius! 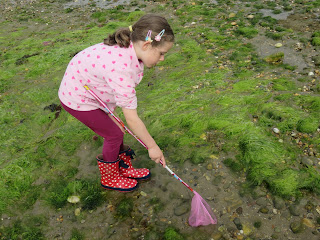 Little 3 loved the rock pools, he was splashing around in his wellies and falling over getting soaked but he didn't mind, he thought it was great fun. 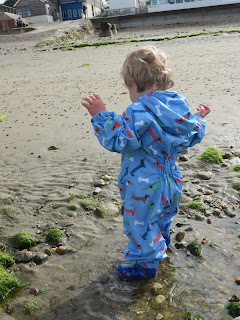 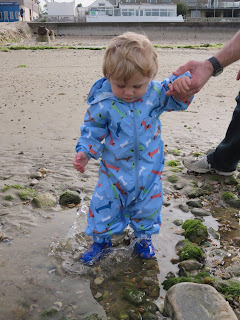 It was little 3 that found the wildlife on this beach trip! Suddenly when he was sat down a big crab came scurrying out from beneath him, I think he had sat on it. It was a pale green/white colour and we watched it bury itself a few feet away with his white back looking just like a pebble. It was brilliant camouflage. We captured him for the girls and soon found a few more knowing how they were hidden, I hadn't seen pale coloured crabs before, we had always caught dark ones. Again Little 3 seemed to send them scurrying as he splashed around and we soon had a bucket full. 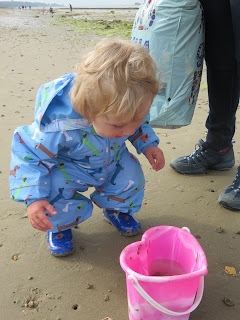 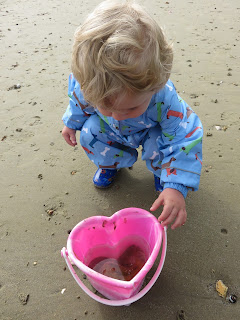 Little 3 was pretty amused by the crabs trying to climb out the bucket and watched them for ages, he was so gentle and patient for a toddler while he stood there.

Soon it was time to go, just a quick trip this time at low tide as we had promised the girls we would find rock pools on holiday, we had managed to find some on our last day just a short distance from our caravan, phew. A change of trousers and back to the caravan for quick showers, while Nanny had gone in search of a fish and chip shop, then it was chips out on the caravan veranda, a lovely way to end our holiday. 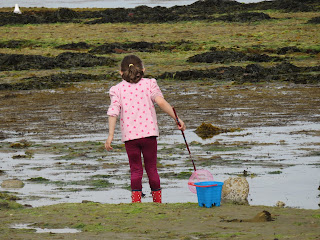 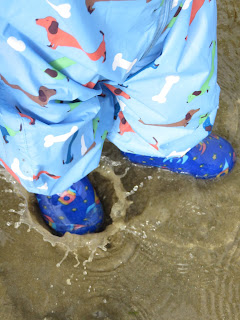 We loved our holiday on the Isle of Wight and the girls are already asking when we can go back again, even though we have been twice now we have hardly seen anything of what the island has to offer, it is quickly becoming one of our favourite family places and I can see many a holiday there in the future.
at 11:17 am
Email ThisBlogThis!Share to TwitterShare to FacebookShare to Pinterest
Labels: beach, holidays, little 3, puddles