One Sunday morning when the Little Ones were all up bright and early we grabbed a few snacks for lunch and jumped in the car headed for a National Trust place not far from us. Little 1 had been doing a mosaic colouring book and we had the idea of taking her to see some real ones.

Chedworth Roman Villa is about 40 minutes from us and while Little 3 napped in the car, I chatted to the girls telling them the things I could remember about Romans. We parked on the lane leading up to the villa and walked up the road. The lady on reception was lovely and gave the girls an activity sheet and a '50 things to do over the summer' activity book and stickers to fill in over the holidays too. At Chedworth there are also tracker packs available, rucksacks filled with activity cards, a trail, magnifying glasses, tape measures, bug identifying cards and other tools so the children can be kept busy all the way around, but we just missed out this time as the family before had had the last one. 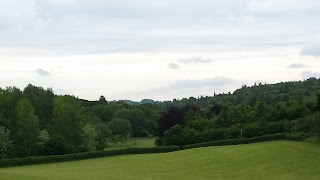 First we had a bit of lunch and coffee in the cafe before heading out to look around. There has been a lot of work done recently at Chedworth, last year there was a building built over some of the villa remains and a path outside was dug up to reveal a huge mosaic which has had a walkway built over it while the National Trust are painstakingly restoring the mosaic underneath. The girls were interested in looking at the mosaic and then walking through to look at the remains of the dining room and finding out about the baths. Little 1 was particularly interested in the fact that this villa would have belonged to a prosperous family who would most likely have had slaves, and we talked about how the slaves would serve the family. 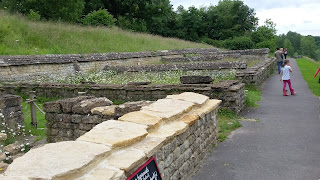 Having moved outside we had a look in the water feature that they would have used for worship and spotted a few newts, I did try to take a picture but we had to stand behind a rail and I couldn't zoom in close enough. 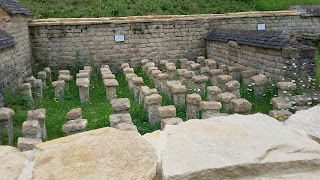 We wandered around the remains of the villa and after reading the information signs told the girls what each bit was and what it was used for. Above is a picture of the pillars from what would have been the underfloor heating, the floor would have sat on top of these. 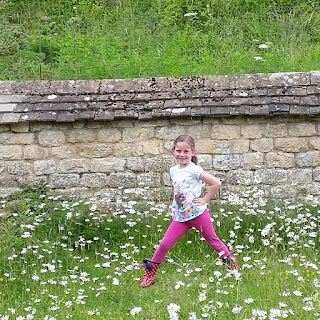 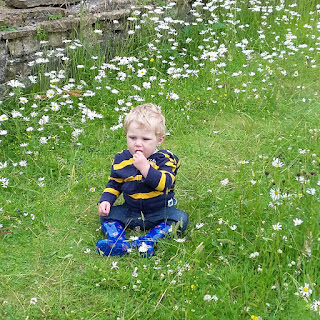 The Little Ones enjoyed running in and out of all the 'rooms' and walls. Little 1 wanted to pose for pictures in the Daisies while Little 3 preferred to eat them! We found out that underneath all the grass and flowers were more mosaics in some places and last year a big one had been dug up but then recovered to protect it from the elements. The National Trust is saving to build another building in this area of the villa so they can uncover and show the mosaic but they need to raise rather a lot of money for that. 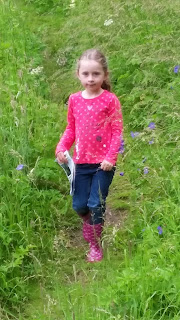 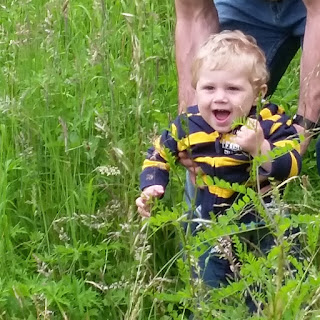 As we were exploring we found out about some really rare snails that could be found in the grounds, funnily enough they are called 'Roman' snails. It was breeding season when we were there and we found about 8 as we walked around and looked under bushes and around the edges of the walls. Daddy had picked one up to show the girls before we saw the sign saying that you needed a license to handle them! They were a white colour and at least 4-5 cm in size. The girls were fascinated. 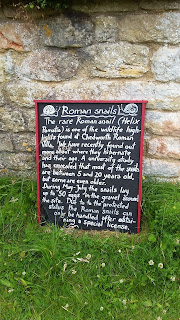 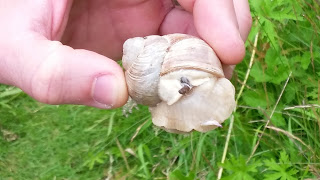 One of the things I love about the National trust these days is that they cater for families and children, there is always plenty for the little ones to do to keep them occupied and activities on hand for them too. At Chedworth we had a go at playing with some old replica toys, creating mosaics with tiny magnetic squares, watching the birds (I even saw a woodpecker for a while before Little 2 scared it off) and dressing up and pretending to have a battle. 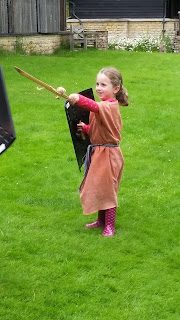 Our brave Little 2 fought valiantly and defeated Daddy Dastardly in a ferocious battle, she was victorious and proud of her efforts running around the green cheering. Little 1 had a quick battle with her sister but had stripped off her dressing up before I had the chance to take a picture. 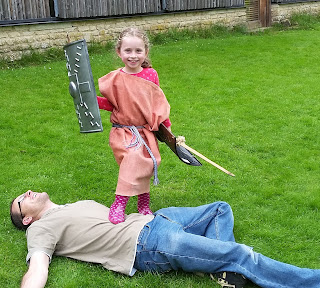 We had a good time at Chedworth and spent a few hours there looking around and exploring, the Little ones enjoyed running around and playing as well as getting hands on with the activities, they were all pretty tired when we headed for home. 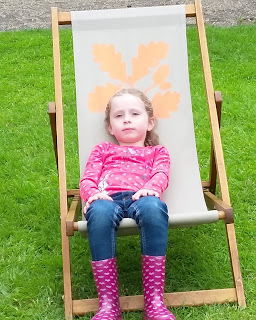 I wonder where we will visit next...
at 11:25 pm
Email ThisBlogThis!Share to TwitterShare to FacebookShare to Pinterest
Labels: daddy, days out, little ones, mummy, national trust