A day of history at the IOW steam railway

While on holiday on the Isle of Wight we visited The IOW Steam Railway located on the east side of the island not far from where we were staying. The girls were excited about riding on the trains as they have enjoyed railways in the past. This time both girls showed much more interest in how the trains worked and were less apprehensive about the big engines and noisy steam so allowed themselves to get much closer. 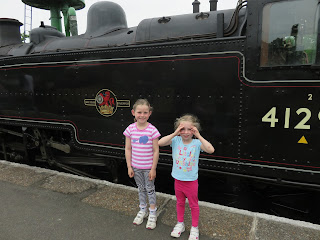 We based ourselves at the main Havenstreet staion in the middle of the 10 mile route where all the main attractions were. As it was half term the train was running all day and with our tickets we could hop on and off as much as we liked. Either end was a station that you could get off and have a little stroll through the woods while you waited for the next train or have a picnic or you could just stay on and go back again. 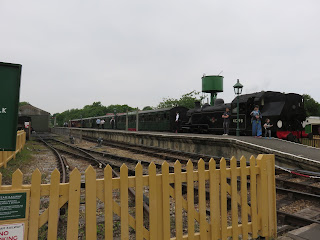 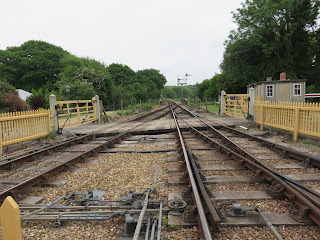 After arriving we checked out the cafe for coffee and cake while the Little ones played on the play area, there was a huge metal train climbing frame which Little 1 and 2 took turns driving. When it was time for the next train we hopped on for a half hour ride to Smallbrook station and back.

We had been having a busy holiday and some later nights than usual, the motion of the train and sitting still had a tiring effect on the Little Ones. Little 1 actually laid down and almost fell asleep on the seat while Little 2 sat very quietly gazing out of the window watching the trees and all the sheep in the fields go by. Little 3 was a bit perplexed about the jolting train and clung to Daddy for a while before realising that he could get down and toddle around the carriage which he thought was utterly great. I had taken a vast amount of photos on the journey of us, the scenery and Little 3 however 99% of them were blurry, off centre or had someone's limb in them due to the jiggling around in the carriage! 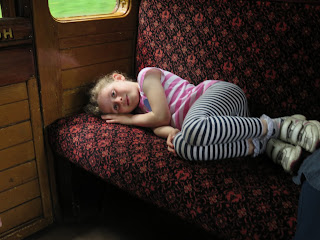 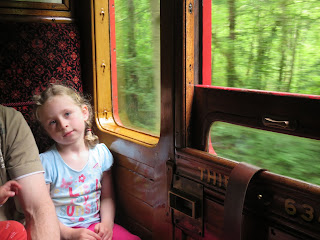 Arriving back at Havenstreet it was almost time for lunch, we popped into a little museum area where there were toy trains and track as well as colouring for the children while us grown ups read all about the history of the railways and looked at the memorabilia.

After a picnic we watched a Falconary show on the lawn run by a small Birds of prey centre within the grounds that you could also go and visit for an extra charge (but we didn't). Another play to let off some steam and we hopped back on the train for another trip. 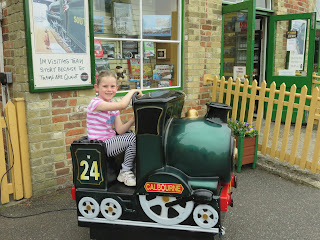 This time we did the whole circuit back down to Smallbrook station and all the way up to Wooton station, it took around an hour and Little 3 was lulled to sleep almost the whole journey laid comfortably across my lap (pushchairs had to go in the guard van). At one stop we chatted to a volunteer in his smart uniform and he told us all about the railway and how much water and coal is used each day to run the train. 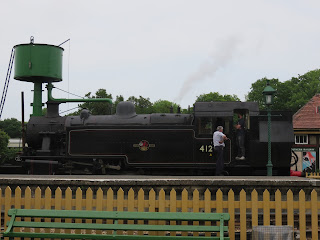 The greatest thing about this railway is that all the trains and carriages dating back to as far as 1876 have been saved and restored by the staff and volunteers. There was a working museum out through the shop which was incredibly interesting to look around. Old carriages looking like they would fall apart any minute, rotten wood on a metal base with peeling wallpaper and yellowed ragged curtains, stood one side while carriages in various states of repair stood the other and a heavy smell of creosote, paint and grease made us feel like there was history in the air.

There were Victorian carriages complete with old cases and lace head rests, and recordings playing of people who had worked on the railways and others explaining the rail history of the island which were interesting to listen too. The Little Ones explored the carriages and waved red and green flags pretending to be the conductor and passengers. 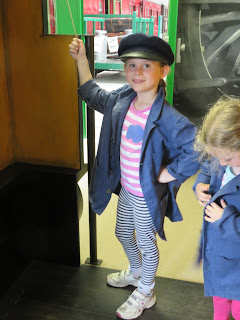 These was also a section for the Little Ones to play at driving a train, hats and jackets for them to wear, a real whistle (that they did not stop pulling!) and a fake furnace where the girls fed coal (black tennis balls) into the chute to fuel the fire (lights and roaring sound effects) and a steam gauge which whooshed when it got full. There was also a quiz and a few games to play too. 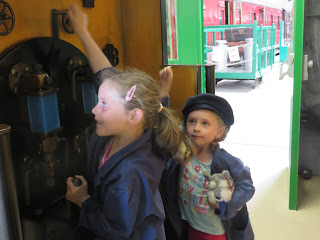 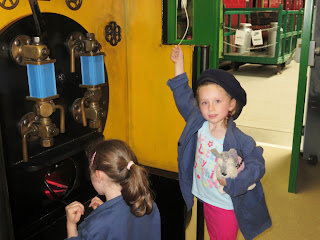 We all enjoyed our trip to the railway and learnt a lot too, Little 2 already wants to know when we are going on a train again.

at 12:42 pm
Email ThisBlogThis!Share to TwitterShare to FacebookShare to Pinterest
Labels: days out, holidays, little ones