Fun in the Forest with Family

A couple of weeks ago my Auntie, Uncle and cousins came to the Forest of Dean for a few days, seeing as they were nearby, we went to meet up with them for a walk. We ventured over to a well worn spot for us, The Sculpture trail at Beechenhurst Lodge. I remember walking this particular walk when I was a small child and it is lovely to take the children to places where I have memories of my own and where we can make memories as a family. 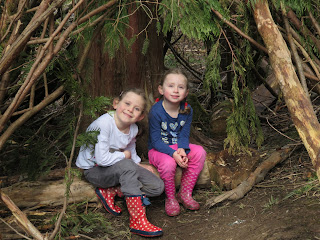 These days several of the sculptures have seen better days, mainly the wooden ones, some have been removed and a few replaced (I think they are still in the process of replacing others), and so it was not quite as good as it used to be but we still had a great time walking and catching up with family. 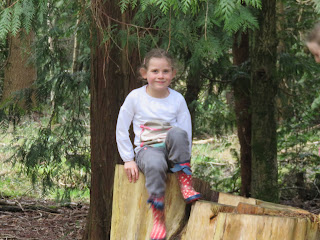 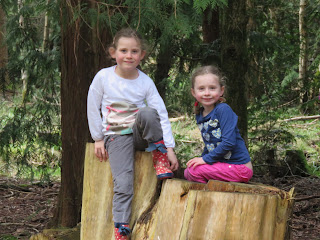 There was the threat of rain and the sky was overcast but apart from a brief shower it was dry and warm enough not to wear coats which Daddy ended up carrying. Little 1 wanted to walk hand in hand with one of my cousins (her second cousin) who she loves to go and see when we visit Devon and misses her dearly even though we only get to see them a handful of times each year. 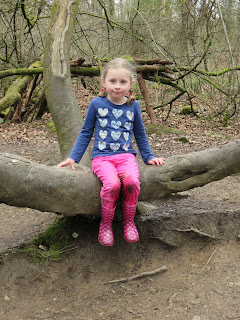 Little 2 was happy just to run about, finding dens to hide in and walking with Daddy. Both girls wore their wellies and walked along the muddy ditches either side of the track most of the way around, with Little 1 trying to get her older cousin in too without much luck! 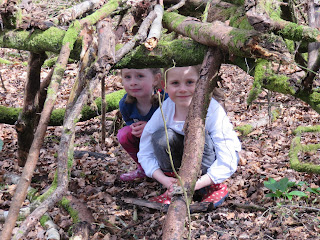 As the girls walked they looked out for the sculptures and spotted a few little dens near the footpath, they had to have a little peek in each one. They love being in the woods and are usually off exploring but this time they stayed quite close to us as we walked and chatted with family preferring to stomp and squelch through the muddy gullies instead. 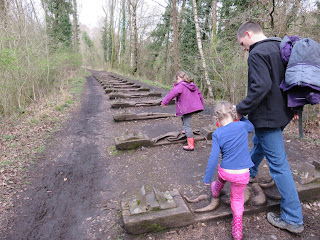 Little 3 is too little right now to walk and having only had a few first teetering steps then we opted for the backpack for him which I carried. Having not really been to the forest since he was really little last year and generally being down in the pushchair on walks closer to home, he was really enjoying being closer to nature. From my back he was reaching out to touch the leaves and totally absorbed in looking at the trees pointing and shouting 'that there' and 'wassat?', before nodding of for an afternoon snooze. 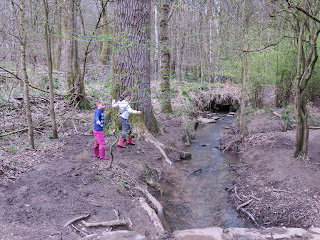 We had made it about two thirds of the way around the trail and had been walking almost 2 hours without a murmur of tiredness from the girls but when we spotted a shortcut back to the lodge we all decided to take it as the afternoon was wearing on. 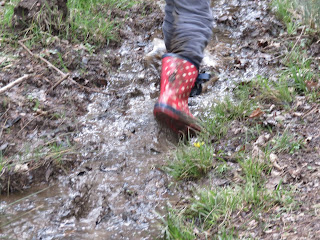 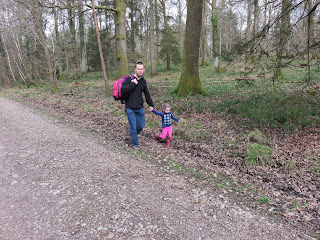 Back at the lodge we produced flasks of tea, coffee and warm milk as well as some tasty biscuits to refuel and while we chatted the girls even had energy for the play area! Shortly after we said our goodbyes to our family and headed home. 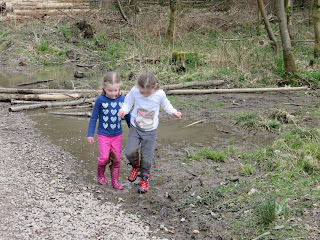 Miraculously all the Little Ones managed to stay awake (just about) for the 45 minute drive home, the girls were bundled into the shower to wash muddy legs and freshen up then as it was almost bedtime a quick trip up the road to the chip shop for sausage and chips all round for tea delighted the girls as that is a treat in our house and even more so they were thrilled that they got to eat them in their pyjamas!! I am sure we will go back to the Forest of Dean several times before the summer is out. 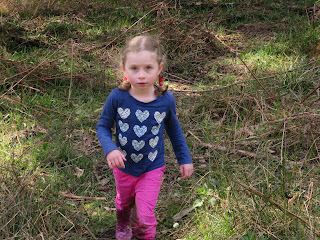 at 10:58 pm
Email ThisBlogThis!Share to TwitterShare to FacebookShare to Pinterest
Labels: little ones, out and about, walking