We are currently in the process of nap time negotiations with Little 3 and by the looks of it we are down to one nap a day now. Napping has not been one of Little 3's best points up until recently, as a tiny baby he would only nap while having a lazy feed on me meaning he was pinned to my chest and me to the sofa for long periods of time. If I knew he wasn't hungry, I had dinner to cook or a school run to do he would scream until he fell to sleep exhausted on my shoulder or in the pushchair where he would sleep 20 minutes MAX and then we would be back to square one. The early days were tough and Little 3 was quite often tired but it did get better.

By 5 months old he had found his thumb and began to sleep a little better although he mostly still wanted to fall asleep on someone, he would go down in his cot once settled but you could set a clock by him and guarantee that he would be awake in 25 minutes maximum. He did this three times a day, after the morning school run, midday and after the afternoon school run, there simply was not enough time to do anything in this short space of time. I usually used it to prepare the next meal for myself and the girls or read a quick story/play a game with them if I wasn't hurriedly putting the washing out or something. As a family we found it rather tough, Little 3 was still tired when he woke and unhappy but nothing I tried would get him back down, he demanded a lot of our attention and the girls didn't get enough.

Little 3 was so different to Little's 1 and 2, they had both been model babies, they would nod off in the bouncer after a feed and sleep ages, doze happily in the pushchair or out in the car, they would both go to sleep by themselves and slept in their cots for naps once they were a few months old. Little 3 was a completely different child, he needed cuddles and holding, he wanted us and with two other children to care for it was not easy, perhaps it was the reflux and he was more comfortable upright, I have no idea.

Slowly but surely he began to self settle and go down in his cot with just a quick cuddle and things got better still. By 7 months he had begun sleeping much better at night once we realised he wanted a muslin as a comforter and the odd nap was more than 25 minutes! This continued until the beginning of this year when we moved him out of our room.

Now if you had told me that Little 3 would not be in his own room until he was 9 months old I would have laughed out loud. Little's 1 and 2 were in their own rooms and sleeping through at 6 and 4 months respectively, we hadn't moved Little 3 before that as he had been such a poor sleeper waking 3 or 4 times a night and wanting feeding and later cuddling back to sleep. We didn't want him to wake the girls, the head of his cot in his room is up against the wall of Little 1's room and we didn't want her disturbed, she had school to go to and needed her rest.

Shortly after going into his own room Little 3 began to sleep through the night a whole 12 hours several times a week and oh how it was bliss, after nearly a year of interrupted sleep (if you count waking up for a wee in pregnancy too) I was sleeping much better and Little 3 was so much happier and rested too.

6 weeks ago he began lengthening his morning nap to around an hour or more and taking half an hour to an hour after lunch too. It was lovely to see him happy, rested and getting the sleep he needed, he began to sleep through the night nearly every night too, all this sleep did mean he was ready to start the day around 5.30am though but I'd have that anyday rather than being up half the night.

This past week or two as he approaches his first birthday, Little 3 has dropped down to one nap, he is not tired after the school run and now goes down around 11ish and sleeps until lunch sometimes an hour and the other day 2 and a half!! The bonus of him having one nap is we can now go to more baby groups as he is awake in the morning and early afternoon. The best bit of all, now that he is tired by bedtime having been awake since lunch, we have been having to wake HIM up in the mornings at 7am to get breakfasted before going to school! 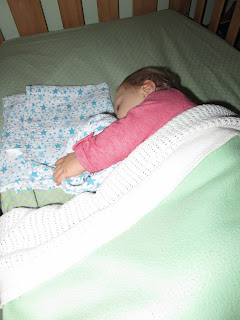 I am much happier and not nearly so exhausted now that everyone is getting a better night's sleep, having a block of time late morning while Little 3 naps means I can spend quality time with Little 2 when she is not at preschool and get all the jobs done on the days that she is. And with this happy chappy waking up with a grin like this... 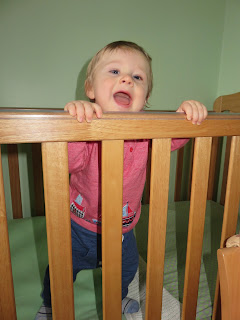 ...because he is finally getting the sleep that he needs, our household is full of giggles, laughter and playing these days rather than a tired grumpy baby.

How did naps evolve for you? Did you have the problems that we did with Little 3??