Little 3 at nine and a half months

So having realised I haven't written an update on Little 3 in ages, I thought I'd best fill you in. The last month hasn't been that great to be honest, Little 3 has just had one illness after another and it has taken its toll on us all. He has had several colds, a chest infection, a weird tummy thingy that Little 2 and I had too where I was starving all the time but when I ate I got horrible tummy cramps but was otherwise fine and the roseola virus, each with only a day or two of being well (therefore happy and sleeping) in between.

Daddy and I have been tired and drained from the lack of sleep having had a clingy unwell baby as well as excited girls on their Christmas holidays and the festivities going on but at least Daddy had over a week off  so we could tag team with Little 3 and grab some much needed sleep where possible.

There has been one huge positive that has happened this month too though and that is that Little 3 is on the move and not just crawling he is cruising as well! 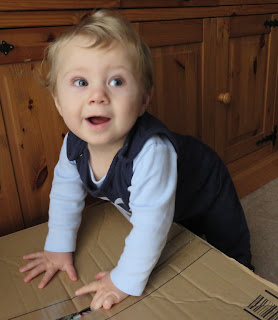 Little 3 had been getting around by rolling and pushing himself backwards and spinning around for some weeks, he was getting a bit frustrated that he couldn't get anywhere fast and suddenly one Sunday he just got up on all fours and did a robotic kind of slow crawl, the following day he had mastered it and was off, that was just as he turned 9 months old, a week later he was cruising the furniture too. Having looked back through my camera I realised I haven't got any photos of him doing his early crawling they are all of him standing up, he only crawls to get somewhere now as he'd rather be upright!! 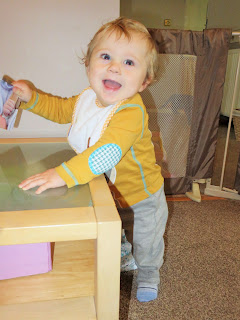 Now that Little 3 is on the move he has found a clever way of moving things around with him, wherever he is he can be found crawling around with something in his mouth. He is often with a toy moving it from one place to another, it is quite funny watching him try to get big things onto his mouth, he has learnt to bat them across the carpet instead and is getting quite good with his aim now! 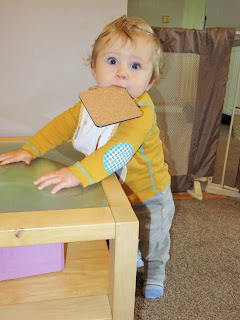 This month Little 3 has also gained 2 new teeth and is now sporting 8 pearly whites and boy does he have strong jaws, we have all learnt not to put our fingers, or anything for that matter, near his mouth as you will not get it back without a fight. There have been a few sore finger moments where I have attempted to hook something out of his mouth and ouch it really hurts when he bites! 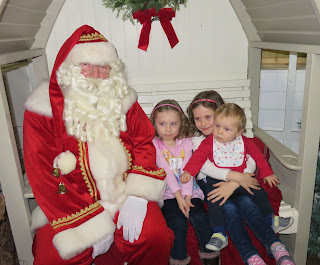 December saw Little 3 celebrate his first Christmas but unfortunately he came down with the roseola virus the day before Christmas eve and was rocking an all over body rash and over 40 degree temperature for the whole of the Christmas eve/day and still quite unwell Boxing day and the weekend so he was not able to enjoy it fully. Between doses of medicine he was happy to tear open his gifts and explore his new toys from our laps though and we did make it out to see family for a few hours to share the festivities before bringing him home early for bed. 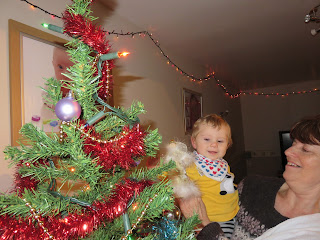 Aside from all the illnesses Little 3 has certainly developed into a loveable cheeky little boy this month and is becoming less of a baby now. He loves to explore and make a lot of noise with banging things and his musical instruments, he is also obsessed with rolling balls and opening/closing doors and the safety gates when his sisters leave them open.

Little 3 also makes me laugh as he has some wicked facial expressions all with his eye brows and eyes, He gives me that cheeky know it all look or raises his eyebrows as if he is laughing while flashing a sly smile. I can tell he is going to be a cheeky monkey and melt everyone at the same time, he is so scrummy. 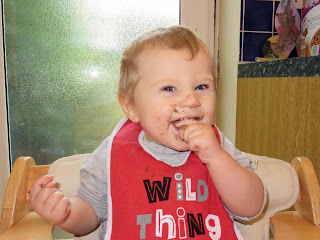 Crawls, pulls to standing and cruises a little

and gets chatted up by old ladies, supermarket cashiers and passersby as he flashes his gorgeous smile at everyone from the pushchair!
at 1:49 pm
Email ThisBlogThis!Share to TwitterShare to FacebookShare to Pinterest
Labels: growing up, little 3, poorly sick, time flies, weaning