Little 3 has reached a really inquisitive stage recently, he is exploring everything, really looking at it and working it out and a little less quick to put things to his mouth, it is lovely to see him so interested in things.

I made him up a few simple sensory pots, to have a go at rolling and shaking and exploring, he loved them and it kept him occupied for ages. 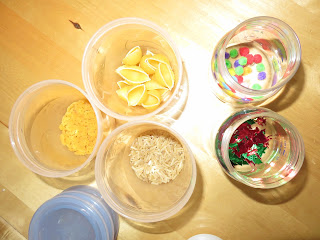 I used a few old food storage containers with secure lids that I knew he couldn't remove and that wouldn't pop off if dropped/thrown about for safety and a couple of old milk storage containers for the liquid ones again with secure lids. You could use things like butter tubs and empty fizzy drinks bottles as long as the lids were secure and your little one was supervised throughout. I opted to use food containers as I knew they would be safe if chewed. 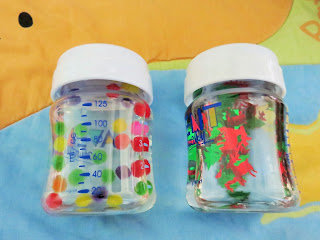 I filled the tubs with dry pasta shells, baby pasta stars and dry rice then secured the lids and the bottles with christmas confetti and pom poms and added water to those. I nearly used coloured water but then thought twice, it would be much easier to pick up a few pom poms bits and dry a puddle than getting food colouring out the carpet if the lids did work loose! 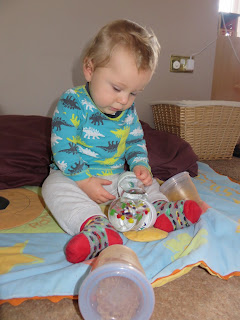 I let Little 3 loose with them and he shook, rattled, rolled , chewed and tipped the pots. He liked the pasta ones best, I think the water ones were a little heavy for him to hold as they were a bit wide for him to grip, I have some handles that fit those bottles somewhere I'll have to dig out so he can pick them up easier. 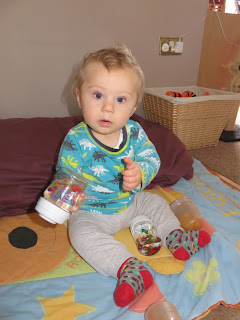 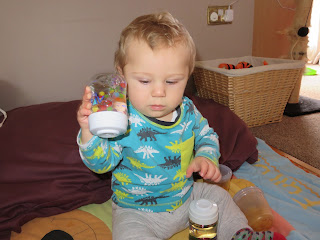 You'll have to excuse the fact that he looks completely and utterly shattered and a bit spaced out, he had a really bad cold and his cough had prevented him from napping that day so he was very tired and a bit grumpy too! He did enjoy his sensory pots, honest. 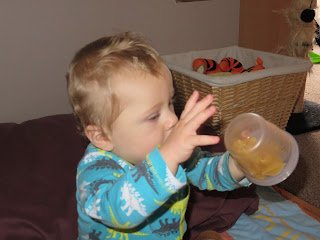 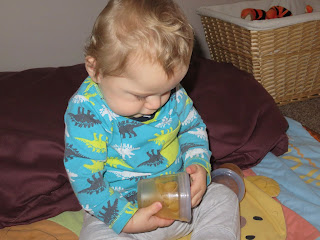 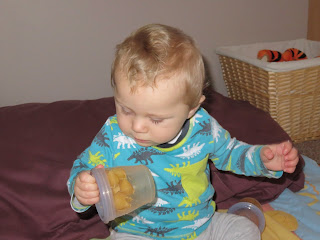 I managed to get one smile, poor thing looks terrible! He did enjoy his sensory play it kept him occupied for ages and he has played with them lots since. Now I just need to think what else to use, maybe lentils and cereals next. 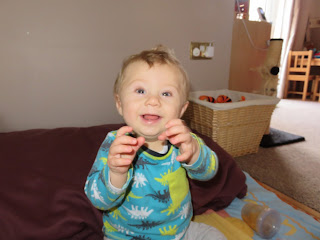