Little 3 has just had his half year birthday, I can't quite believe my little boy is 6 months old already. He has changed all of a sudden and looks like a proper big baby, he now weighs 15lb 15oz and has his first two teeth, he has also had a huge development jump too.

Little 3 can now sit up unaided and will play for several minutes leaning and grabbing before comically toppling sideways in slow motion, it doesn't seem to bother him falling over he just looks completely surprised at how he got there! He is a very active little boy with his arms and legs always on the go, he often ends up on his tummy from reaching too far and will spin around on his arms but isn't yet making an attempt to crawl. This is good in my book, two older sisters with playmobil, lego and all manner of small things and a mobile baby equals a nightmare for me, we may well have to invest in some sort of room divider so that I know he is safe from all the choking hazards. I really do not want to send the girls upstairs to play we like us all being downstairs together.

All of a sudden Little 3 has found his voice, it just happened one day last week, he awoke from a super long nap (he is a cat napper normally) and started saying mmm mum followed a day or two later by da daaa and now he chats away babbling and saying mmmmum whenever he is in the mood and it is lovely to listen to, if he thinks we are not paying enough attention to his conversation he shouts and gets quite cross if you do not reply. I suppose in a house with 3 women he has already learnt how to get his voice heard!

Little 3 has now been weaning a little over a month and he is really getting stuck into his food, we have been a little more adventurous in the last week trying a few finger foods as he seems to have no trouble at all with my thicker homemade purees. So far we have tried toast fingers, grated cheese, raspberries, strawberries, those carrot puff things and he has had a baby biscotti biscuit too all of which caused him no trouble chomping, chewing and swallowing. As he is now over 6 months we are beginning to introduce more textures and gluten into his diet as up until now it has just been fruit and vegetable purees and baby porridge, next up are things like pasta and noodles and meat and fish too. 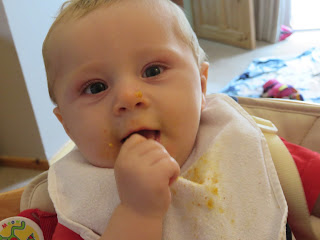 We have been following a puree weaning approach as I did this with Little 1 and Little 2 rather than traditional baby led weaning as I am one who likes to see the food going in rather than on the floor. I have however this time around been a lot more relaxed about big bits and finger foods and seeing as Little 3 is so interested in food and really wanting to eat with the rest of us most meals have ended up with him having bits off our plates after he has demolished his bowl of goo so we now seem to be doing a bit of both methods which suits him just fine.


Little 3 is now on formula as I have stopped breastfeeding in the day (he still has a feed or two overnight but hopefully this will not be for long.) Breastfeeding in the summer holidays with the girls home was hard, he got distracted and they got bored, I was exhausted and run down from feeding marathons and lack of sleep so something had to give. I now feel much better and Little 3 is much more content too. He has had a return of his reflux symptoms since being on formula though thankfully without the screaming fits he had when he was tiny, so he is back on the anti reflux meds and this has helped him to stop being sick lots.

Little 3 is still waking every night several times and shows no signs of stopping this yet, sometimes he wants to feed and others he just seems to want a sneaky cuddle as he will cry until I pick him up then he will snuggle in while he sucks his thumb and nods off again, I'd love him to sleep a bit better as I am quite frankly knackered from 6 months of broken nights but I'm sure he will get there soon (please) and in the meantime I will make the most of the sleepy baby cuddles. 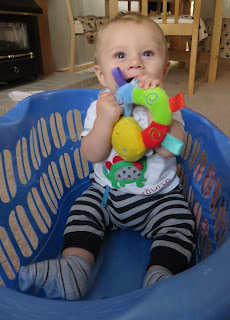 
....and is the most utterly gorgeous, cheeky, happy little boy ever (and no I am not at all bias, at all, really!)